I have mentioned in previous blog entries that my first solo international trip – to Mexico City over Thanksgiving 2002 – raised the travel bar for me. With apologies to my parents (who always put together a great Thanksgiving Day spread), Turkey Day 2002 was probably the best Thanksgiving of my life. Others, since then, have come awfully close.

The other day I started thinking about all the places I’ve been to – not just over Thanksgiving, but at any time. I have been to 41 U.S. states and more countries than I can keep track of. I have set foot on six continents. I have completely filled two passports and had extra pages added to both. According to flightmemory.com, I have flown almost 740,000 miles. That said, holiday season travel gives me an extra lift, because travel over Christmas always reunites me with my parents, whom I wish I could visit more often, and because travel over Thanksgiving maintains my own tradition – 11 years running – of going someplace new, sometimes with friends but often by myself.

Seeing as it is mid-way between the two holidays as I write this, I thought I’d share, over these next few days, a few fond holiday season travel memories.

I am not religious and I am not a mall-loving spendthrift, either. As such, it might seem strange that I love holiday decorations, but I do…when elegantly done. Thirty-foot artificial Christmas trees in Honolulu, in front of which stand Bermuda shorts-wearing, parrot-wielding Polynesian touts? Not elegant. A real tree in an 800-year-old cobblestoned European public square, covered with real snow and white lights and topped with a red bow as a nearby kiosk sells warm mugs of mulled wine? Elegant. The Thanksgiving I spent in Stockholm and Copenhagen (2010) was a far cry from the warmest holiday I’ve experienced, but it was certainly one of the most wide-eyed.

I have been to both cities twice; once in winter and once in summer. I by far prefer these cities with a fresh dusting of snow and with a frosty glow in the eyes of their residents. Snow can come late to these Scandinavian capitals, even this far north, so I’ll concede that I just “lucked” into (though it wasn’t lucky for everyone) one of the heaviest early-season blizzards in recent history while on my trip – a week-long onslaught of snow that left almost the entire continent covered in a gorgeous layer of white. Even my connecting flight back to the U.S. – United Airlines out of LHR – was delayed while the plane was de-iced. We sat on the tarmac at Heathrow while a heavy snowfall delayed or canceled many flights out of London. This is especially rare for this part of Europe; the Gulf Stream and some strange phenomenon called “Global Warming” have resulted in less-and-less snow for the British Isles, and more-and-more rain instead.

Stockholm – which easily makes my “Europe Top 5” list at any time of year – is especially lively from mid-November to 24 December with Christmas markets, shoppers, carolers, and the tantalizing aroma of roasted chestnuts and Swedish glögg. The city’s not-too-flashy churches are decorated with Nativity scenes (I stepped inside a few of them simply to get out of the cold); the nooks of its outdoor sculptures are topped with just the perfect amount of snow; houseboats sit, strung with colored lights and permanently moored in the chilly harbor waters; the bars and restaurants of Stockholm’s Södermalm are simply packed until the wee hours of the morning; the open-air museum/zoo of its famous Skansen features sleigh rides, holiday craft markets, and real reindeer! I met good people, I ate heartily, and I took thousands of photos.

Copenhagen – considerably further south but much, much colder – is Scandinavia’s most-populous capital and yet is more compact than Stockholm. The city features just a few narrow canals as opposed to Stockholm’s archipelago of 24,000 (!) islands. Copenhagen is also a bit easier to navigate, as it is essentially flat. (The downside to this is that the wind blows in from the North Sea to the west, across the flat country all the way to the Baltic Sea. I stepped out the door of my hostel and the wind literally blew me over.) Between Thanksgiving and Christmas, Copenhagen offers two gems: Strøget, one of Europe’s longest pedestrian streets, is – along with the arterial streets radiating from it – a people-watcher’s delight. Holiday lights are strung above the street just high enough so that Denmark’s nation of tall people won’t bump their heads. I am a window shopper, not an actual shopper, but even I succumbed and bought something – a ridiculously-warm, ridiculously-expensive sweater. (I may have worn it once in LA, but it’ll get much use during Mexico City’s chilly highland nights.) The second holiday season delight is Tivoli, Copenhagen’s centuries-old amusement park. Few of the rides can operate in such cold, but the real attraction is the holiday décor, music, and the sight of happy families enjoying their city.

Check back soon, Loyal Reader, for more holiday season travel memories. Thanks for stopping by! 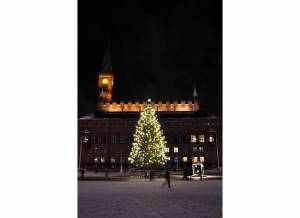