Over the past several months, I have shared a series of portraits – staged and unstaged – of people from various ports of call around the world. The last three entries focused on the Eastern Hemisphere, broken down as Africa, Asia, and Europe. For today’s entry, I thought I’d “cross the pond” to North, Central, and South America.

I hope you enjoy the photos in this latest entry in the series, as well as the stories behind them. 🙂 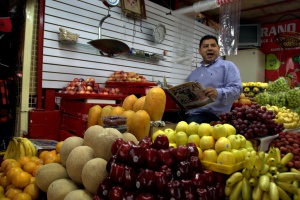 END_OF_DOCUMENT_TOKEN_TO_BE_REPLACED

Earlier this fall, the New York Times ran a contest that was right up my alley. The famous NYC daily took applications for a single travel writer who would spend 52 weeks – the entirety of 2018 – traveling around the world, spending seven days apiece in each of the newspaper’s 52 places to visit in 2017.

The application process was easy enough; applicants had to provide links to their social media accounts and to write a 500-word essay, but the competition was ridiculous. The job opening was posted for roughly 14 days; the paper received 3,100 applications in the first 72 hours alone!

I threw my proverbial hat into the ring, even though I had already visited many of the destinations in question, such as Stockholm and Puerto Escondido. Considering the competition, I know that I – along with every other applicant, for that matter – face an uphill battle towards job acceptance, but I would definitely savor the opportunity and believe that I can excel in the role.

In my essay, I wrote about how my having already visited 70 countries makes me the ideal candidate because, having traveled internationally every year since 2000 except 2014 and 2015, I am not only a seasoned traveler but a tireless one as well.

Will I get the job? Probably not. But the application process inspired to think back upon some of the places I have traveled to. I compiled a country-by-country list, and thought I would share it with you, Loyal Reader. Without further ado – and taking the definition of “run-on sentence” to new levels – here is one sentence on each country that I have visited:

END_OF_DOCUMENT_TOKEN_TO_BE_REPLACED

I spent part of last Saturday afternoon walking around downtown Knoxville. It was a perfect summer day, with non-threatening clouds and a gentle breeze. As I headed from Gay Street towards Market Square, one block away, I passed an alley that travels between the two…and did a double take.

Graffiti, alive with color, adorned both sides of this urban alley, and a dozen or so tourists were snapping pictures. When in Rome, the saying goes…and so I did.

END_OF_DOCUMENT_TOKEN_TO_BE_REPLACED

To celebrate the arrival of spring, this month’s photo feature takes us to the tropics of South America. Exactly two years ago I visited the Colombian cities of Bogota, Cartagena, and Santa Marta, as well as the pre-Hispanic ruins of Ciudad Perdida. Cartagena (full name: Cartagena de Indias) was the trip highlight.

I was especially taken by Cartagena’s Colonial-era City Walls. They were built by the Spanish conquistadors to protect from maritime invaders…and have never been breached.

END_OF_DOCUMENT_TOKEN_TO_BE_REPLACED

Hello again, Loyal Reader. The month of April flew by in no time; I have some blog entries to catch up on. If all goes well, I’ll be posting twice-weekly for at least a little while, to add more content to GringoPotpourri and to keep my rabid fans sated. 🙂

I have finally made some sense of my six memory cards worth of Colombia pics. Something like 5,000 images, all told. Those of you who are friends with me on Facebook can see a sampling of roughly 100 pics from Bogotá, Cartagena, Santa Marta, and Ciudad Perdida, but I’ve also posted a few more pics below. First, though: some final thoughts and observations about Colombia, no longer Gran Colombia in name but one of the grandest places I’ve yet visited.

Breaking it down (and in no particular order of importance):

END_OF_DOCUMENT_TOKEN_TO_BE_REPLACED

I have been home for six days now, but I suspect it’ll be another six weeks, months even, before I’m able to stop thinking about Colombia’s Caribbean Coast.

Pamela and I left Bogotá pleasantly surprised by our time there, both wishing we had a couple more days in the capital but also ready to explore a new region of the country. A 90-minute flight (preferable to a 12-hour bus ride, you had better believe it!) on South America’s oldest airline, Avianca, took us to CTG, aka Cartagena de Indias. The door to the plane opened and so much humidity overtook the plane it was as if a wall collapsed upon us. Yep, definitely different from Bogotá!

END_OF_DOCUMENT_TOKEN_TO_BE_REPLACED

¡Hola! I am writing this from my hostel in Bogotá as I nurse my fourth beer of the evening – Cerveza Poker, and man is it going down smoothly – whilst reflecting on my four great days in Colombia’s massive capital city.

Colombia’s turbulent modern history began with it being perhaps one-fifth, geographically, of a mega-country of the same name following the region’s liberation from Spain in 1870. (If your knowledge of history is sketchy, the rest of “Colombia” included Panama, Peru, Ecuador, Venezuela, and Bolivia.) Much of Greater Colombia’s destiny was established in Bogotá, one of the oldest cities in the Americas. The city has remained an important player on the Latin American scene, and has weathered a few turbulent decades marked by presidential assassination, a nasty drug war, and paramilitary conflict with FARC and other guerilla groups to once again be a continental hot spot of culture and dining. And the tap water is potable!

END_OF_DOCUMENT_TOKEN_TO_BE_REPLACED

It is mid-March, and Easter is upon us. Technically, spring is just around the corner, although to some it already feels like summer. Others, however, still feel the mercilessness of winter. (San Fernando Valley temps in LA this week are in the low 90’s, yet the Midwest was hit by near-record-setting blizzards just last week.)

What does this mean? It means that many in Latin America and Catholic Europe are preparing for Semana Santa (Holy Week). Antigua, Guatemala and San Salvador, El Salvador are just two (very different) cities in Central America renowned for their Semana Santa festivities, which typically include elaborate processions through the streets (and over alfombras – carpets – of moist sawdust and flowers), from church to church in re-enactment of the crucifixion, burial, and, yes, resurrection of Christ. In my own city, the sprawling barrio of Iztapalapa is the venue for an annual Passion Play, although it is said to be one of Mexico City’s most dangerous neighborhoods and I haven’t yet built up the courage to venture there with my DSLR and take photos. Across the ocean, the faithful of Seville, Spain and other cities in Andalucía perform similar processions; I was there in 2011 but alas, the parades were rained out and that leg of the trip was generally unmemorable. Further abroad still, the Cardinals of Vatican City even elected a new pope to ring in the resurrection!

What does this mean for me? I, like many other Latinos (I guess I’m Latin by proxy, mas-o-menos), will be traveling. You may recall, Loyal Reader, that I mentioned in my Looking Forward and Back – Part Two blog that I wished to take advantage of my time here to explore destinations relatively close to Mexico. Well, I’m not sure if this counts as “close,” seeing as it is a four-hour flight…but then again, flying there from the U.S. is at least six hours by plane, so I’m saving a few hours on airplanes and am counting it anyway. Where’s that, you ask?

I am going to Colombia!