Hello again, Loyal Reader. The month of April flew by in no time; I have some blog entries to catch up on. If all goes well, I’ll be posting twice-weekly for at least a little while, to add more content to GringoPotpourri and to keep my rabid fans sated. 🙂

I have finally made some sense of my six memory cards worth of Colombia pics. Something like 5,000 images, all told. Those of you who are friends with me on Facebook can see a sampling of roughly 100 pics from Bogotá, Cartagena, Santa Marta, and Ciudad Perdida, but I’ve also posted a few more pics below. First, though: some final thoughts and observations about Colombia, no longer Gran Colombia in name but one of the grandest places I’ve yet visited.

Breaking it down (and in no particular order of importance):

Those are all the words that are fit to print…for now. Enjoy the pics I’ve shared below, and check out my Facebook page for even more. ¡Hasta pronto!

Below pic: Botero’s Gato (Cat) sculpture in his namesake Bogotá museum. Hawkers all over the country sell miniature liknesses.

Above pic: Pamela and I enjoying a mudbath at Totumo Volcano, near Cartagena. Fun!

Below pic: The girlfriend and I taking in the sun on our ridiculously-long boat ride to Playa Blanca (“White Beach”), somewhere in the Islas del Rosario. (As you can plainly see, she’s hotter than any Colombian ladies I saw walking around.)

Below pic: Nothing special as photographs go, but this building – Santa Marta’s Customs House – is said to be the oldest colonial building in the Americas.

Above pic: The literal high point of Day One on the Ciudad Perdida hike. Somewhere beyond those clouds is Pico de Bolívar, Colombia’s highest coastal peak. 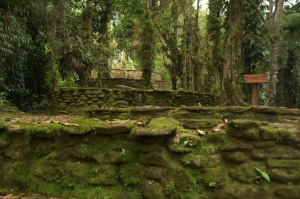