If you’ve done any city walking in Latin America you have no doubt come upon a teeming mass of humanity that is the local market. Not commonplace in the U.S., Latin American-style markets are often an all-out assault on the senses. They can be loud – with fish and produce vendors shouting out the day’s fresh catch to passersby. They can be smelly – I don’t think they’re necessarily unhygienic, but all those spices mixed with all that meat and fish creates quite an aroma. They can be crowded – in fact, you can count on it. Especially on Sundays.

The closest we get in the U.S. is, perhaps, Pike Place Market in Seattle, or maybe Fisherman’s Wharf in San Francisco. I have never experienced NYC’s Chinatown market, but I’m told that it’s a must-see for market lovers. Europe has more: Covent Garden in London for flowers and produce; any random flea market in Paris; I found a lovely covered market in Kiev and have seen several summer markets in Scandinavia.

But the ones in Latin America – particularly those in Mexico – deserve special mention. They deserve their own blog entry, in fact. Allow me to do the honors!

Every neighborhood has one of these. They can be recognized by the bell-shaped “Mi Mercado” sign overhead. These markets typically occupy an entire city block, and serve locals, not tourists (though tourists are certainly welcome). These are convenient places to buy basic toiletries, clothes and shoes for women and children, party supplies (piñatas), and flowers.

These markets often have great varieties of fresh juices, and you can even order a liter to take home for breakfast.  See those long counters with bar stool-type seating? Those are comidas corridas, or food stands selling cheap, hot eats. The larger markets will have the aforementioned fish, while the smaller markets have at least a basic butcher shop of sorts where you can order fresh cuts from any of the numerous counters. One counter at the “Mi Mercado” in my neighborhood has a counter serving fabulous tacos campechanos – tacos with a beef/sausage mix – that I eat far too seldom.

Mexican handicrafts are so easy to find, it’s almost as if the sellers come to you. (Often, in touristy neighborhoods such as Coyoacán, the sellers do come to you.) The Zócalo and nearby plazas are often occupied by sellers of such tchotchkes as sombreros, miniature sun stones, pint-sized Aztec figurines, serapes, coin purses, etc. But most tourist areas and every colonial city will have at least one mercado de artesanías, or craft market, where you can find every Mexican-made souvenir imaginable (and more than a few Chinese-made knockoffs as well). My favorite is the sprawling Mercado de Artesanías de la Ciudadela, behind the Jose Vasconcelos Library near Balderas metro station.

Not the same but also geared towards tourists and wealthy locals, open-air weekend art markets are popping up all over the place. The most famous is the long-standing Bazar del Sábado (Saturday Bazaar) in San Ángel west of Coyoacán, but there are others throughout the city as well. Condesa and Polanco are current hot spots on the art scene.

Central de Abastos means, literally, “Groceries Center.” This sprawling mega-wholesale market is for merchants, restaurateurs, and shop owners to gather wares for their businesses – particularly fruits and vegetables. Although I have never been here, I’ve read that over 30,000 tons of food is delivered this market each day, making it not only Mexico City’s go-to source for fresh produce but also the largest market of its kind in the world. The market, in the questionable eastern delegación of Iztapalapa, is responsible for some 70,000 jobs, including several thousand working just as security guards. (A similar concept in wholesale merchants’ markets is La Nueva Viga, located in nearby Iztacalco delegación and the continent’s largest seafood market.)

Central de Abastos has essentially replaced earlier, more traffic-clogging markets of its kind. The location of Central de Abastos, in the eastern delegacíon of Iztapalapa, has easy access to Benito Juárez International Airport. Unfortunately, Iztapalapa is notorious for being a high crime area, and the market’s presence is at least somewhat responsible. With prostitute-soliciting truck drivers, corrupt unions, and lots of cash moving around, is that any surprise really?

In the grittier parts of Mexico City you’ll find the occasional “black market.” These are strictly no-go for camera-toting foreigners. That said, if you’ve ever been robbed you might find your stolen merchandise for sale here to buy back. I wonder if they have my old laptop? 😉 I was told that in the “olden” days, before Best Buy and Walmart, this is where you went if, for example, you wanted to buy a new TV. The general rule of thumb was to show up with just enough money for the TV, plus a bit extra to ensure that it – and you – made it safely to wherever you parked your car.

I went Christmas shopping north of the Centro Histórico last December and unwittingly stumbled upon the southern fringes of Mercado Tepito. Here, the market exists as a series of street-clogging tianguis (open stalls) selling, quite literally, everything under the sun. (Incidentally, much of what you’ll find here is bootlegged, possibly including the Spongebob Barbie I purchased for my niece. Buyer beware, I guess.) I am still curious to check out the more-northerly, inner corridors of Mercado Tepito, said to be a multi-story labyrinth of shops and dark corners, but I won’t go alone. Anyone wanna join me on a fun/scary adventure?

The last – and best – type of Mexican market is what I call, simply, the Central Market. Every city and sizable town has one, and Mexico DF itself has several, as modern Mexico City is essentially Tenochtitlan and numerous surrounding market towns (Coyoacán, Tlalpan, etc.) that eventually merged together. These markets are usually housed inside a large building – brick if the town is thriving or corrugated metal otherwise – and are typically divided into several themed sections, for example, produce, flowers, electronics, clothes, shoes. They often sprawl across several blocks (Cuernavaca’s ridiculous Central Market comes to mind) or several levels, and feature one or two main entrances as well as several exits to local neighborhoods, where the markets sometimes spill out into the streets in the form of tianguis. Often, these tianguis extend all the way to the nearest bus station. The covered market is usually quite clean, but the tianguis can be a different story. Imagine a food stand exposed to a busy street with buses racing past every 30 seconds. How can everything there – food included – not be coated with a fine layer of dirt? Hell, that probably explains why everything tastes so delicious. 🙂

Sundays are sheer chaos. I mean this in a good way, mind you, as I simply mean that this is “market day,” when the usual, year-round stalls compete with additional once-a-week vendors. A recent trip to Xochimilco’s Mercado reminded me of this, as the buses were filled with indigenous old ladies who traveled great distances just to sell their handcrafted wool knickknacks or strange blue elotes (roasted corn topped with mayonnaise, cheese, and chili powder). A part of me wanted to try the blue corn on the cob, but I couldn’t fully commit. Maybe next time.

The aforementioned market types can be found throughout Latin America. I remember a Mercado Negro in Lima, Peru with a collection of bootleg DVDs that stretched across an entire city block. For amusement I perused the boxes and found that the vendors basically copied and pasted the same description taken from one movie to all titles. According to the box, “Finding Nemo” was rated “R” for “Nu-duty.” Naughty Pixar.

Further north, Ecuador’s Cotopaxi Market is supposed to be one for the ages, with whole rows of tourist souvenirs, a livestock trading area, and – sadly – a cockfighting section. The Guatemalan highland town of Chichicastenango plays host to a Thursday and Saturday Market that is among the most vibrant I’ve seen. That being said, there’s no place like Mexico – the biggest Spanish-speaking country in the world – to fulfill all of your market day needs.

A sampling of pics from various Mexican markets…. 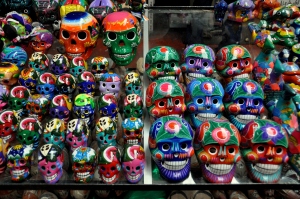 Above pic: Day of the Dead-themed souvenirs from the Mercado de Artesanías de la Ciudadela.

Below pic: Finally, something NOT made in China! Artisan hand-carving a guitar. 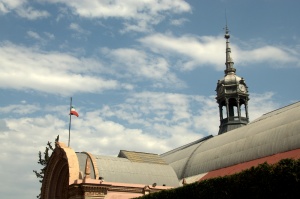 Above pic: Typical façade for a city market; this is Mercado Hidalgo, in Guanajuato. 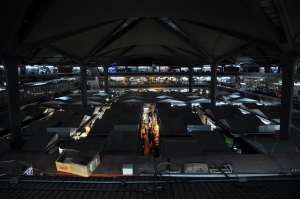 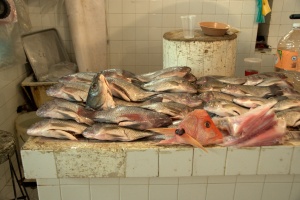 Above pic: The market offerings aren’t always pleasant to look at, as this image from Xochimilco’s Sunday Market suggests. If you’re of the squeamish variety, steer clear of the seafood aisles…

Below pic: …or the meat sections. Almost every non-tourist market has one, and the smell will give away the location with enough time for you to change course. (I took this pic in Cuernavaca, 11 years ago, and it remains one of my favorites.) 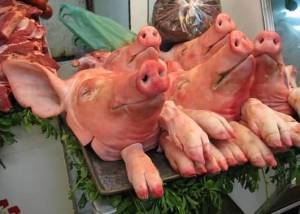 Above pic: Markets can be fun, too. This Mercado de Coyoacán vendor, Jim, really wanted his picture taken. I was only too happy to oblige.

Below pic: Here’s another pic from Xochimilco’s market. I love the lighting, the composition, the facial expressions, and every other aspect of this pic.

Above pic: Many Mexican markets outgrow their original building and expand into adjacent buildings, such as this flower market lean-to, an adjacent structure to Mercado de Xochimilco’s original, warehouse-style market building.

Below pic: I (accidentally) visited the tianguis of Mercado Tepito…and survived!