Happy New Year, Loyal Reader! I can hardly believe it’s 2014 already – truly, where does the time go?! I stayed away from my blog for awhile, partly due to slow internet at my parents’ house, where I have spent the last three weeks; and partly due to a simple promise to give myself some R&R. Mission accomplished, I’m back in Mexico City and ready to make this a productive year.

So what have I been up to? In addition to spending quality time with the ‘rents, I visited Chicago for five wonderful days and nights. I hadn’t been there since the July 2011 wedding of my friend Miles, and it seemed a good place to lay over en route to Tennessee.

It is no secret that Chicago is a cold place to be most Decembers. In this context, “cold” is a word to be used loosely. Some years, December is a brisk – but bearable – 35 degrees. Every so many years, you can get away with a light jacket and scarf. Then there are years like 2013, when December temperatures hover in the single digits, sometimes with a negative sign before the number. As it happens, my visit to Chicago took place during one such year.

Cold! I stayed with friends in Old Town and was sure to pack long underwear for the trip. Though cold, it was also quite sunny, with a solid coating of snow to boot. The sun and the snow made for optimal photography conditions, so I braved the elements and snapped picture after picture of Old Town, Lincoln Park, Grant and Millennium Parks, and of Lake Michigan and the Magnificent Mile. At the risk of sounding presumptuous, I was quite pleased by the results. You can check out my Facebook page to view 40 or so of my favorite shots.

I also visited friends old and new. Miles and his wife hosted a holiday party that was a good deal of fun. They added parenthood to their list of responsibilities last year, and it suits them. That Saturday, I took the train out to the ‘burbs to meet my friend The Herr (actual name). He and I traveled in the same social circle yet had never actually met prior to this trip. I introduced him to Gene & Jude’s hot dogs and he introduced me to Rusty, one hella cool cat. The evening before, I attended the wedding of my cousin Jessie, who I hadn’t seen in over 11 years! When I left the wedding around midnight, the temperature had actually gone up 20 degrees or so and a perfect, gentle snow was falling. I love Chicago!

I left Chicago for Tennessee, with Memphis being my first TN destination of the trip. I spent several days with my sister and my niece, neither of whom I had seen in a year. My students sometimes ask me why I go so long without visiting family; I have to remember that Mexican families are extremely close-knit, just as my students should remember that it’s not as easy to get away as one would like.

I spent quality time playing cards with my niece, enjoying my sister’s cooking, and touring Sun Records (near downtown Memphis), where Elvis, Johnny Cash, and Jerry Lee Lewis found fame. Cool place. The highlight of my time in Memphis, however, was simply spoiling my sister’s pet dachshund, Ass-Breath. Okay, that’s not the dog’s actual name, but seriously, that doxie needs to gargle about ten gallons of Listerine. She is fun, though.

Speaking of dogs, my parents arrived a few days later with Molly, their new pet golden retriever. Molly is their first dog in several years; the passing of her predecessor, Timber, several years ago really put my parents through the emotional wringer and it took them a long time to ready themselves for another one. Molly is a rescue, she’s on the young side of three, and is well trained. I wasn’t there to witness it but my dad told me that when he and my mom met Molly for the first time, she immediately lifted a paw in the air, and my parents were sold. Yeah, she’s great.

Ugh, I’m rambling. We spent Christmas as a family and then it was back to Eastern Tennessee for my mom, dad, and Molly. I joined them for three relaxing weeks. I slept in most days, watched a lot of movies, read a few books, played with the dog, and put on at least five pounds courtesy of mom’s home cooking. It took multiple visits to the DMV, but I was finally able to replace my driver’s license (stolen in the mugging of June 2013). A tremendous relief.

I consider myself a spiritual person, which is to say that I’m often thinking about the world and my place in it. I did a fair amount of soul-searching these past weeks, looking for a path that will lead me in the right direction: a better year than 2013.

What does that mean, you ask?  I hope to accomplish five things:

1)       Grow my circle of friends. As a traveler, I have friends all over the world. This is great, from a couch-surfing perspective as well as a knowing-someone-to-help-me-sample-the-local-nightlife perspective, but I sometimes feel that so much time spent globe-trotting has been at the expense of my local friend circles. This was the case in my former stomping ground of LA, and I left Los Angeles after 12 years with only two or three reliable friendships to continue nurturing. I don’t have many close friends in Mexico City, either, but that might have to do with cultural differences or because of a perceived language barrier from the perspective of local residents. Call this a generalization, but while people here are polite and kind, they are also shy.

2)      Travel more. Last year saw just two big trips for me: a spring trip to Colombia that I’ve already written heaps about on GringoPotpourri; and my recent holiday trip. I didn’t really even get to explore the cities, towns, and nature outside Mexico City, except for a day trip to the pyramids of Teotihuacán and two whirlwind trips to Querétaro and Pachuca. Each of these excursions took place in the first half of the year; I booked a November trip to San Miguel de Allende, four hours north of Mexico City, but had to cancel it because of illness.

3)      Become the best English teacher I can be. I love my job and I love my students. People tell me I’m a natural born teacher, but I still feel that I have much to learn. I hope to advance to the next level of certification, but would prefer to do that full-time, rather than one class/day, three nights/week. Of course, the best schools cost money – and might not even be in Mexico – which leads me to number 4.

4)      Get myself into a better financial situation. 2013 was a tough year from a monetary standpoint. I won’t bore you with specifics except to say that if I wish to travel more and replenish my “rainy day” fund, I need to make more money. Numbers 2 and 3 on this list won’t happen without number 4.

5)      Optimize my blog. My recent sabbatical notwithstanding, I think I’m doing fine in terms of quality and quantity of content, but I need to attract more viewers. I don’t make any money from the site, but since I feel strongly that the content is interesting (I am biased, of course), I think I should be able to find a larger audience…once I learn more about Search Engine Optimization. Any tips on how a non-HTML expert can do this would be appreciated. Meanwhile, I will continue to add new posts as often as possible – at least once a week. 2014 Oscar nominations will be announced on Thursday, and I’ll probably write about those for my next post.

So that’s it for now. Thanks for reading this far. Thanks for the moral support. Thanks for sharing and commenting. Thanks for contributing to my “Where Am I?” photo location guessing game. And an extra thanks to those of you who’ve followed my progress since this site’s creation in November 2012. I shall see you soon.

A few pics from Chicago and Memphis – glorious cities both. 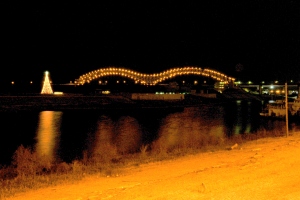 Above pic: The Mississippi River at night – an experiment in extreme color contrast. The Christmas tree in the photo is on Mud Island, which was featured in the movie “The Firm.”

Below pic: Sun Records, a repository of music history near downtown Memphis and still an operating recording studio.

Below pic: Chicago skyline as seen from Grant Park. I had never noticed those trees before despite countless strolls through the park.