I lead an English-language conversation club twice a week. Last Wednesday, I asked one of my students to bring in an article to read to the class. She selected an article about Semana Santa (Holy Week/Easter Week) traditions in the Catholic community. Only half of the class was Catholic, so the article prompted a lively discussion to say the least.

I won’t politicize this blog entry; that’s a subject for another day. One of the topics that came up in our small group discussion was the importance of Palm Sunday, Good Friday, etc. observations among Catholics and Christians in general. As it happens, I’ve spent several of the past Semana Santa weeks in various Spanish-speaking, majority-Catholic countries, and it’s not uncommon to find daily (or nightly) processions through the streets, with locals dressed as Roman soldiers or paying penitence for their belief that Jesus died for their sins. Culturally, it is quite the spectacle.

Mexico City has its own Semana Santa traditions, beginning every Palm Sunday, but Holy Week “culminates” in DF with a Good Friday Passion Play – an all-day reenactment of the final hours of Jesus Christ. The play is performed at various locales in Iztapalapa delegación. All actors chosen to play various parts – soldiers, Jewish elders, Pontius Pilate, etc. – are residents of the borough. Most of them have lived in Iztapalapa all their lives, and few – if any – possess any dreams of acting fame and fortune.

Iztapalapa is the largest of Mexico City’s 16 “boroughs” as regards population, and is generally working class in socio-economic makeup. As a result, the delegation carries an unfortunate reputation for crime. I once taught classes on the safer “edge” of the delegation, in a guarded warehouse complex near one of the city’s major arterial roads. Even though my arrival to class was in the pre-dawn hours, I never experienced any problems. I have long yearned to explore the area in more detail, but I’ve always been cautioned by friends living in Mexico City that Iztapalapa is dangerous. I would usually respond, half-serious and half-joking, with something along the lines of, “That’s why you should go with me – as a local, you can be my eyes and ears.” My friends never laughed when I said this, not even once. 😦

As it happens, I knew someone who was interested in attending Iztapalapa’s Passion Play, and my new friend invited me along. It was only a few weeks ago that I discovered the way-cool blog Mexico City Metro Project, the brainchild of Peter, an Aussie-born expat now living in Mexico City.  Peter set out to visit and document each of the 150+ metro stations in the city – a daunting undertaking that took two years to complete. Peter and I exchanged comments about each other’s blogs, and he invited me to meet him and his girlfriend, Belén, outside the nearest metro station. (Check out Peter’s blog, btw – it’s great!)

The day began on an ominous note, as a 7.2-magnitude temblor (earthquake) rocked Mexico City. But all was well; the epicenter was 200 miles away and there was little damage. I left my apartment at 10 a.m., and when I arrived at Cerro de la Estrella estación one hour later, I knew upon sighting the crowds and the sheer number of police everywhere that safety from petty crime would not be an issue.

The Crucifixion wouldn’t be reenacted for at least four hours, but already hundreds of male locals, most wearing purple robes and brown sandals and dragging heavy wooden crosses of their own making, were making their way up to “Calvary” (aka Cerro de la Estrella – literally “Star Hill”) in their own act of penance. Hundreds more – thousands – followed, presumably to scope out a good spot to view the afternoon’s main event.

Peter, Belén, and I headed the opposite direction, towards the center of Iztapalapa, for a bit of lunch and culture. Literally called “Centro de Iztapalapa,” the center consists of a large public square, surrounded by shops, a market, and the local government building. In the middle of it all is a green swath of lawn boasting a fountain, bandstand, and several palm trees. Dozens of families were out and about – picnicking under the palms, walking their dogs, and taking in some sun. Indeed, although Iztapalapa delegation has a population of almost two million – bigger even than Guadalajara, Mexico’s second-largest city – Centro de Iztapalapa felt more like a lively market town than the eastern edge of a sprawling megalopolis.

The northwest corner of the square fronted another square, this one a flat expanse of concrete. Today, it was packed to the gills with spectators, for the judgment of Jesus Christ was about to begin. On one side of the square stood a large recreation of Pontius Pilate’s provincial government palace. Roman columns, guards, togas, the whole works. On the other side of the square, a makeshift Jewish temple was fashioned – complete with belly dancers!

We arrived just as the trial was beginning, and it was standing room only. The event was wired for optimal sound, and the acoustics were impressive.

I am no religious scholar but I know the basic story: Jewish elders scream for blood, while Pontius Pilate’s wife (unnamed in the Bible but later referred to as “Claudia”) is moved by the gospel of Jesus of Nazareth, and warns her husband that he will have this young man’s death forever on his hands. Meanwhile, what to do about Barabbas, a real criminal? As this happens, Jewish elders are cooled by servants carrying large fan palms, and young boys feed grapes to Pilate and his family. Back in the 21st century, vendors sold disposable binoculars and cardboard periscopes for only just 10 pesos (about 70 U.S. cents).

Trumpets sounded in the foreground while the faraway sound of a marching band grew ever louder. The marchers finally arrived, and their procession included Jesus (his hands tied) and the Virgin Mary (here represented as an angel). Jesus was summoned to meet with Pontius Pilate, and the deliberation was given. I don’t know how closely this representation reflects what actually happened, but the judgment staged here prompted a celebration by the Jewish temple elders. Jesus was paraded through the crowd like a tortured dog. I felt truly sorry for the person playing him. I am told that it’s an honor to be cast in the role, but I don’t think I would personally want such an honor.

(GringoPotpourri note: the roles are cast one year in advance, and the man and woman chosen to play Jesus and Mary must take a vow of celibacy, be free of tattoos, and commit to 12 months of clean living. In addition, the man cast as Jesus must grow his hair long and get himself in excellent physical condition, as he will ultimately have to carry a full-scale wooden cross across Centro de Iztapalapa and halfway up Cerro de la Estrella.)

We left to make our way up Cerro de la Estrella. The site of the Crucifixion is on a flat, false summit. Three giant wooden crosses are mounted, and a chain-link fence prevents spectators from getting too close (or, frankly, from getting much of a view). I call this makeshift Calvary a “false summit” because the true summit of Cerro de la Estrella is several kilometers away by foot and 200 altitudinal meters higher. It is atop this peak that the Aztec’s New Fire Ceremony took place, once every 52 years until as recently as the early 16th century. I only just learned that a museum midway up the slopes commemorates this ritual, and that an Aztec pyramid on the true summit remains to this day and can, in fact, be visited. Note to self: come back soon.

As it happened, it was awhile before Jesus made it to the Crucifixion site. We passed the time chatting with locals, admiring/bemoaning our fresh sunburn, and enjoying the view. Far to the northwest was the skyline of “downtown” Mexico City; I immediately spotted Torre Mayor (the city’s tallest building) and Torre Latinoamericana (the city’s most famous) in the distance, though they were just black monoliths in the late afternoon smog.

More trumpets heralded the arrival of Roman soldiers on horseback, with Jesus on foot not far behind. Peter snagged a decent fence-line view of the goings-on but I could barely make out what was happening. About this time the sun changed to dark clouds and we decided to head down, hoping to stay dry and beat the crowds. We passed a movie theater-sized monitor broadcasting the Crucifixion up close and we could see the agony of Jesus Christ (and of the person portraying him). He really was strung up on that cross. He really was wearing a crown of thorns. He really was bleeding.

With research I learned that Iztapalapa’s Passion Play originated after a cholera epidemic decimated the community’s population in 1833. Today, the Play has grown in scale as a result, perhaps, of the advent of sound systems to broadcast the actors’ dialogue, or of jumbotrons to zoom in on the agonized faces of the persons playing Jesus. Still, very little seems to have changed in the telling of the tale despite the passage of almost 200 years. That, itself, is historic.

Returning to the discussion in my English-language conversation club, everyone in my group – Catholics and non-Catholics alike – agreed that the Crucifixion was a strong contender for being the most important moment in the history of the world. 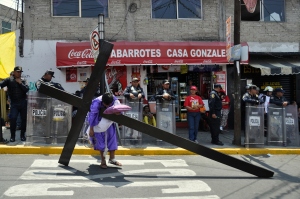 Above and below pics: Devout young men rest on their way to “Calvary.” 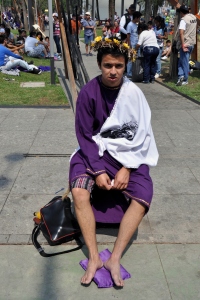 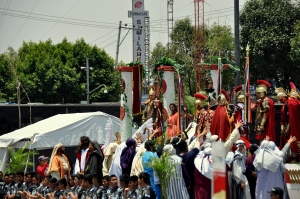 Below pic: Jesus is paraded – rather violently – through the streets after receiving his death sentence. 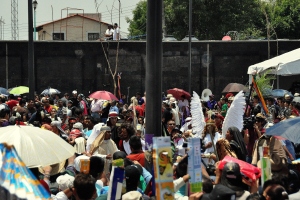 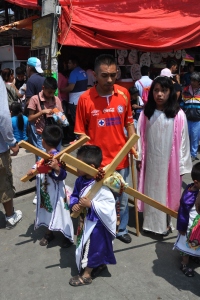 Above pic: On the way to Calvary, even children join the penitent.

Below pic: Roughly two million people descend on Iztapalapa each year for the Passion Play. 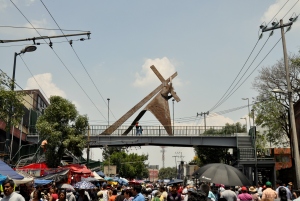 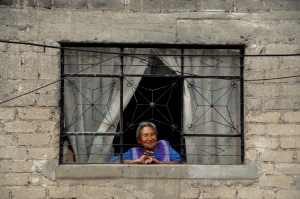 Above and below pics: Iztapalapa locals. 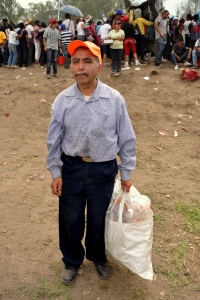 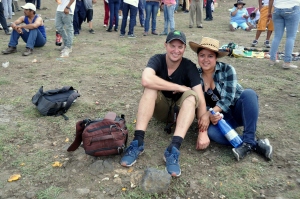 Above pic: Peter and his girlfriend, Belén. Good people. Hope you don’t mind my posting this, guys. 🙂 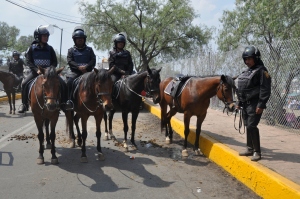 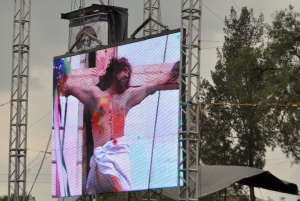 Above and below pics: The Crucifixion, as shown by jumbotron. Notice the reactions in the bottom pic: A man and boy grab their hats in disbelief over what they are seeing, while the boy’s mother looks down, as if ashamed of the cruelty of mankind. Or, she could merely be checking her Facebook. 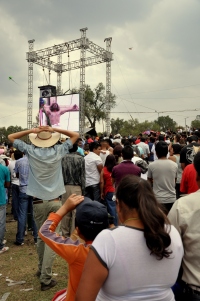