As a teacher I was always discouraged from forming friendships with my students, and for all the right reasons. I see no reason, however, why I cannot pursue friendships, Facebook connections, and the like once I am no longer a teacher – and certainly once I no longer work for the language school that provides lessons to said student(s). So when Yolanda, a former student of mine, suggested that she would like for me to spend one weekend day to meet her family and spend some time speaking English with her children, I felt obliged to say “yes.”

We choose last Sunday as the date and Tepotzotlán as the place. Tepotzotlán is just north of Mexico City – a proper small town and another “Pueblo Mágico” in Mexico’s tourism crown. The “magical town” of roughly 39,000 people is famous for two things: barbacoa (barbecued lamb) and el Museo Nacional del Virreinato (the National Vice-Regal Museum).

I was delighted to discover that Yolanda’s husband and children had a respectable command of the English language. Nine-year-old Carlos and 11-year-old Marco, were shy when I first stepped inside their car, but I made serious inroads before the day was through. I noted that Carlos was wearing soccer clothes branded in favor of América (Mexico City’s most-popular soccer team). I would use this to my advantage later by cheering “Pumas!  Pumas!  Pumas!” (The Pumas, if you hadn’t guessed, are Mexico City’s second-most popular soccer team, and a fierce rival of América.) Carlos always responded with a disapproving “Booooo!” but couldn’t hide the smile that broke through his hearty booing every time.

We parked on the edge of the town center. Even though it was only 11:00 a.m., I was surprised we could still find a spot as Tepotzotlán is prime daytrip distance from the capital. The family suggested that we eat first, and I agreed – so long as I could later get my picture taken atop Benny the Bull (see photographic evidence below), a magnificent horned beast whose keeper wanted 50 pesos for photo-granting privileges.

Like so many other Pueblos Mágicos, the main square and surrounding streets of Tepotzotlán were taken over by tianguis (covered street market stalls), and I was told that although this is typical for most weekends, it was actually much worse several years ago, when the entire town center reeked of barbacoa. Today, the market chaos has been reigned in to some degree, and if it’s barbacoa you seek then it’s the Municipal Market you must visit.

As you may recall from last year’s post about Mexican markets, I love this tradition of communal eating and shopping. Sanitary conditions are generally not an issue, and the market stall we chose seemed a good one. (On the way to our table, a vendor offered me a free barbacoa taco to sample, and after just one bite, I knew I was in for a treat.)

We ordered many varieties of barbecued lamb, even lamb soup! I inhaled mine and quickly asked for a second bowl. In general, though, family-style dining was the name of the game, with plates of self-serve tortillas at each end of the table alongside various grades of salsa. To some, barbacoa is an acquired taste, but I absolutely loved it. The flavor is strong and unique, so I’m not sure I could eat it every day, but if I had a car or lived in the northern part of Mexico City I’d probably come here once a month. As it is, I’m sure barbacoa is readily available in markets throughout Mexico, but I’m a big fan of eating food in a place where it is said to have originated (think Margherita pizza in Naples, deep dish pizza in Chicago, Peking duck in Beijing, etc.).

The UNESCO-listed National Vice-Regal Museum of Tepotzotlán is housed inside a stunning Jesuit monastery that covers one of the biggest square blocks you’ll ever find. Here you’ll find not one but two churches, triple cloisters, large gardens, the aging stone Chapultepec Aqueduct, taken here from Mexico City for some reason, and more 17th-18th-century religious art and historical objects than you’ll find just about anywhere. (The collection, is, in fact, the biggest in the country.) The museum is free on Sundays for Mexican nationals and a reasonable 57 pesos for everyone else.

We spent four hours inside. The small Capilla Domestica (Domestic Chapel) and the stunning Iglesia de San Francisco Javier (Jesuit Church of St. Francis Xavier) each feature altars lined in gold-plating and carvings of what seems like the entire pantheon of Catholic saints. I can’t quite call this place a photographer’s dream, as tripods are necessary (yet prohibited) to capture the very best of shots, but still…I did alright.

In addition to the carved Jesus and Mary figures, suits of polished armor, scattered pre-Colombian idols, the requisite Last Supper paintings, and the aforementioned churches, there were some nice, unexpected surprises inside. The lower level featured a large kitchen – any cook’s dream, really – and the upper level featured a second, smaller kitchen as well. The walled gardens provided an respite of calm, and access was through an archway lined by remarkable murals. A special exhibit on the upper level provided inside into life of Carmelite nuns from the colonial era. An upstairs mirador (scenic lookout) provided a view over the adjacent rooftops at the smog and unremarkable industrial architecture of northern Mexico City.

We divided our museum visit in two. After three hours, we opted for an ice cream break. There were seemingly dozens of heladerías (ice cream shops) and cart vendors around the main square, but we bypassed most of them in favor of a stand that Yolanda’s family seemed to know well. I had pistachio-and-lime, and it hit the spot as I sat on the steps of Tepotzotlán’s municipal building, hunkered in the shade and teasing young Carlos with my tenth “Pumas!  Pumas!  Pumas!” cheer of the day. If this seems like a trivial detail, I am merely pointing something that it took me years of traveling to figure out: often, these little moments – eating ice cream on a warm day; watching people go about their day; noticing the patterns of birds on the power lines overhead – are as important to the enjoyment of a place as is the primary touristic point-of-interest that brought you there in the first place.

Our ice cream cravings quenched, we returned to the museum with a spring in our step for a final look around. Before entering, I took a bedazzled look at the exterior façade of Jesuit Church of St. Francis Xavier, a dizzying display of carved figures. If this is my last memory of Mexico, I thought to myself, I’m okay with that.

It was a great day. 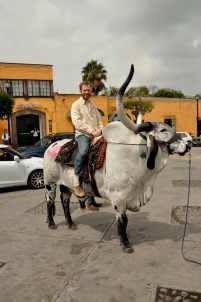 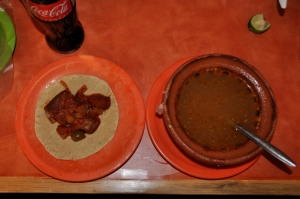 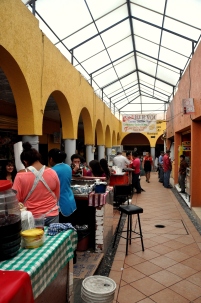 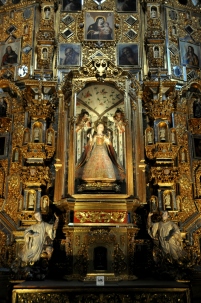 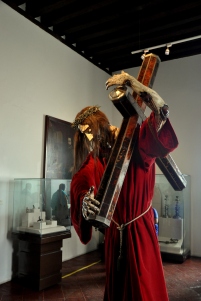 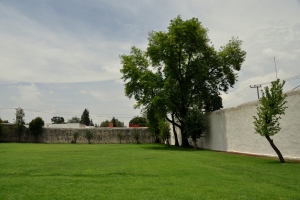 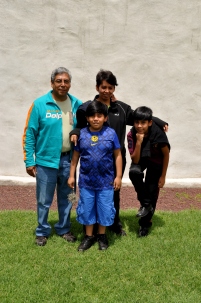 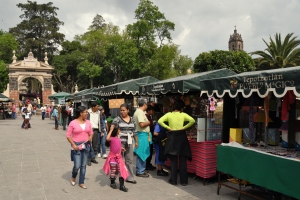 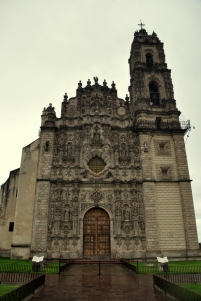