The nation of France – and Paris in particular – has had a tough week. On Wednesday, radical Islamist terrorists gunned down twelve employees of the Paris-based magazine Charlie Hebdo, allegedly in retaliation for that magazine’s publication of satirical cartoons depicting the Prophet Muhammad. One suspect turned himself in and two others – brothers who were once under surveillance until the French government decided it simply had too many “persons of interest” to continue monitoring the ones it was already keeping tabs on – were ultimately hunted down and killed.

The manhunt was well underway by international authorities, and makeshift memorials of flowers and candles were already being left near the magazine offices, when it happened again on Thursday: a policewoman, just 26, was gunned down by one of the suspects in the suburb of Montrouge.

And again on Friday. The killings returned to Paris-proper when two terrorists gunned down four people inside a kosher grocery store in a predominantly-Jewish section of Paris. One terrorist was killed in a standoff but the second, a female, is still at large and is believed to have since fled to Syria.

France has dealt with its share of terror attacks over the years. Whatever your opinion may be of the belief held by some that the very depiction of an image of the Prophet Muhammad is something punishable by death – or of that controversial French court ruling from 2010 that prohibits women from wearing burqas for driver license photos – it is almost certain that the ideological divide – and the violence, unfortunately – will continue.

This week’s attacks in France pale in comparison to the ongoing violence in places like Iraq, Syria, and Nigeria. Still, it seems especially horrific because France is “supposed” to be an evolved, progressive, first-world nation…and therefore is “supposed” to be immune to this sort of extremist violence. I tweeted a few days ago that the last 30 days have not been good ones for free speech, of which I am a staunch advocate. Somewhat infuriatingly, an argument can certainly be made that while Charlie Hebdo had every right to publish those cartoons, they had a moral responsibility not to.

It doesn’t matter. France, despite its flaws, is one of the great countries of the world, Paris one of its greatest cities. I have been to Paris five times and to France with even greater frequency. I suppose I am something of a Francophile, and I would move there in a heartbeat if I could – with little fear of being a terror target. 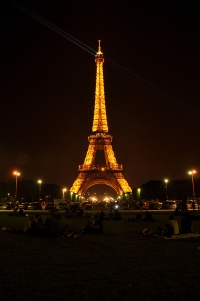 The City of Light

You no doubt have heard the rumors about Paris and its people. They don’t apply deodorant, they all wear bérets, and they eat frogs’ legs with every meal. The Métro is filled with pickpockets, the sidewalks covered in dog shit. Customer service is abysmal. Parisian waiters will spit in your soup if you dare not speak to them in perfect French. And they absolutely despise Americans.

Every one of the above stereotypes is bullshit. (Well, except for the one about customer service. Even some of my French-born friends have admitted that this is not an area in which the French excel. There. I said it.)

My first visit to the City of Light was in August, 2000. Paris was my first stop in mainland Europe following three weeks in Ireland and the United Kingdom. I was with my college friend Miles at the time, and we spent just five days and six nights in Paris, including a day trip to Versailles and another to Giverny, Monet’s pint-sized hometown and location of his “Water Lilies” garden of artistic fame.

Our Paris hostel, MIJE Maubuisson, was ideally located one block behind the Paris city hall and was situated in a historic building. (An interesting regulation as a result of this stated that we were not allowed to hang our towels outside the window to dry.) Dorms were sex-separated but cozy, and the complimentary breakfast – coffee or chocolate, orange juice, pastry, and baguette – was simple yet sublime. I can still taste that delectable bread 15 years later. 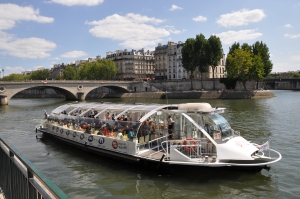 The weather was perfect. We walked from Notre-Dame to the Eiffel Tower and back at least twice, and explored the more labyrinthine inner corridors of the city as well. I ate boeuf bourgignon one night, steak tartare another night, and drank copious amounts of coffee and wine. We watched street performers along bustling Rue de Rivoli and listened to buskers across the river in the Left Bank. We enjoyed crêpes at least three of the five days we were there. The city reeked of romance. (I remember thinking to myself, if only I was in Paris with a significant other as opposed a male friend. This is no certainly no reflection on my friend Miles.) 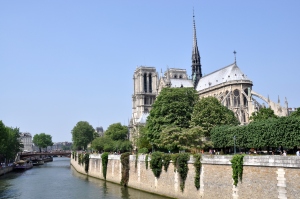 It was eight years before I would return to Paris, and it was in the winter this time. I technically visited Paris *twice* in three weeks, having a full-day layover in Paris before heading to Rome and then finishing in Paris after several days in Italy. A chilly rain fell during my first day back in Paris, but it hardly mattered. Like Owen Wilson said in Woody Allen’s enchanting film “Midnight in Paris,” Paris is lovely in the rain. When I returned 10 days later, Paris had turned sunny and cold – cold enough to prevent the fine layer of snow that had since fallen from melting. 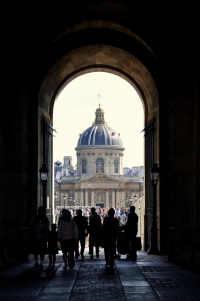 As it happened, Miles met me for this trip as well. We stayed at the same hostel, visited the same places (Notre-Dame, the Louvre, etc.), and took similar day trips (to Fontainebleau and Chartres instead of Versailles and Giverny). We strolled further southwest along the River Seine, explored bohemian Montmartre in greater depth, andbraved the intimidating post-New Year’s crowds at several humbling department stores. (“It’s sales season,” someone explained to us, “and you mustn’t miss it.”) We even hit up Disneyland Paris! 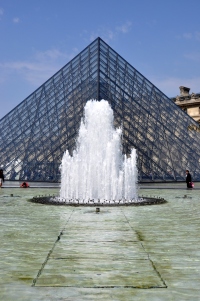 The weather was a bit too chilly to sit outside and people-watch, so we enjoyed Paris in different ways this time. We slowed down the pace. We took long lunches. We slept late. We soaked in the holiday lights. We explored the city’s dazzling museums in depth, rather than racing through like mad tourists checking off the two or three masterpieces listed in each guidebook. (I admit it: I have been there and done that, too.) We sought out Paris as photographers would: following the light, using shadows to our advantage, chasing the sunset, seeking out vantage points, comparing shots, and filling up memory cards as if it was matter of quantity, not quality. 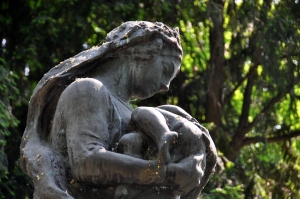 If you can believe it, I managed at least two more trips to Paris, and those were serendipitous as well. One trip found me enjoying unseasonably warm April weather. I made it to Père Lachaise Cemetery, famous as the burial site of Jim Morrison and a place of such unlikely beauty that I lingered for several hours. On this trip I also journeyed a few hours south of Paris, spending several memorable days in the château country that is the Loire Valley. I then continued onward to the German-influenced state of Alsace-Lorraine. That state’s incredible capital, Strasbourg, is like something out of a half-timbered fairy tale. 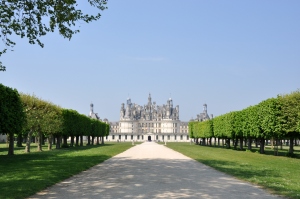 My last trip to Paris was in 2011, in mid-summer. I normally cringe at visiting over-touristed cities during peak season, but Paris is an exception because it absorbs the crowds so well. I was joined by my writer friend Steve this time, and although I still would have preferred to be in the company of an impressionable younger female – a fantasy that continues to elude me – I was more than happy to share my favorite European city with someone who had never been there before.

Steve and I didn’t really cover new touristic ground on this trip, although we managed to hitch a ride on one of the city’s omnipresent tour boats that ply the river from the Eiffel Tower to Île de la Cité. We did brave the lengthy summertime queues for a few of the requisite sites – Notre-Dame, the Louvre, and the Panthéon. There really is something magical about Paris. The crowds, the long lines, the overpriced fountain drinks…while irritating elsewhere, these things have never really gotten under my skin in Paris.

Paris is a big city, and French is a tough language. I get it that many travelers may find the city to be overwhelming – especially if Paris is their first exposure to a foreign language. But I’ve also read that the city is laid out in such a fashion that you should never have to walk more than one mile in any direction before reaching any of its approximately 300 Art Nouveau-influenced Métro stations. And the signage is excellent throughout the city. Three international airports and six long distance train stations (plus the “Chunnel”) make Paris one of the most accessible cities in the world.

I try not to judge people, but exceptions can certainly be made. Frankly, if you’ve strolled along the Seine, taken in the atmosphere of the Quartier Latin, people-watched in a sidewalk café, made the compulsory day trip to Versailles, been humbled by the menacing gargoyles, flying buttresses, and rose windows of Cathédrale Notre-Dame de Paris, browsed the charming open-air book markets, and eaten like a king, and you still aren’t enchanted by Paris…there is something wrong with you.

Paris, I love you.