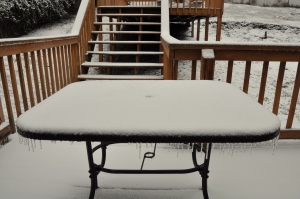 The same weather system that is making its way towards New England, where Bostonians fear it may drop another 18 inches of snow, tore through Southern Kentucky and Eastern Tennessee late yesterday. We only received a few inches, but it was preceded by sleet and freezing rain.

A proper ice storm brought down power lines in my neighborhood twice last night, for five hours altogether. The power was restored after the first outage just in time for the evening news, during which the anchors reported that an estimated 40,000 people were without power. Governor Haslam had already proclaimed the state a federal disaster area when the broadcast began at 11 p.m. Just two hours later, the power went out again.

Fortunately, we knew that the storm was coming, and did a sizable grocery shopping on Sunday – along with seemingly everyone else in town.

The image above is of Casa del Gringo, and was taken at noon today. All things considered, we didn’t get much accumulation. The snowfall shown here is typical of the absolute most that we ever get, in fact. However, mi casa sits on a hill, as does the entire street. I can’t get out of the driveway, which is a sheet of ice. Snowfall and freezing rain are rare enough in most of Tennessee that there are barely enough salt trucks to ply the interstate highways, let alone major county roads. Hilly residential streets? Forget it!

I am fortunate enough to have a pair of crampons in my possession. I strapped them on and invited Molly the Dog to join me for a snowy off-the-leash walk around the neighborhood. As you can see in the picture above, she appears to have found something tasty in the snow; I think it was merely a frozen leaf.

I have only seen one car brave our icy street today. It really wasn’t that cold outside when Molly and I went exploring, so I figured that things would melt quickly once the sun came out. But it’s been in hiding for most of the day, and made just the briefest of appearances during our walk.

I am looking out the window as I write this. The kids across the street are tobogganing down their own hill. I cannot tell from here whether or not they are smiling, but they’ve been outside for the last 90 minutes, so I’m betting they are. This, of course, goes to show that with the right attitude (and gear), Snowpocalypse 2015 can even be fun. After all, who doesn’t love a snow day?!

Be safe out there.