For the fourth month of this feature (see last month’s entry here), we travel to Europe. Perhaps one-third of the way down the left side of Italy’s “boot” lies the former port city of Pisa. Land has since reclaimed the port, however, and the Tyrrhenian Sea is now several kilometers to Pisa’s east.

Athough sailors no longer stop off there, the city of 90,000 Pisanis still draws thousands of tourists each day, most of them making a mad dash from the train station directly to the iconic Leaning Tower of Pisa and Piazza dei Miracoli. 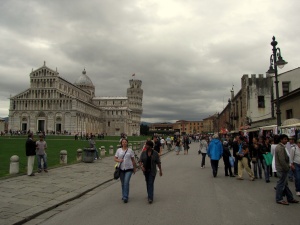 Piazza dei Miracoli – the Square of Miracles – is often mobbed with tourists and touts. In the picture above, even cloudy skies and the threat of rain doesn’t keep the crowds away.

It is possible to enjoy the picturesque plaza (also known as Piazza del Duomo – Cathedral Square), without the crowds. Most tourists visit as a day trip from Florence, and don’t arrive until 10 a.m. As such, the array of shops don’t open until that time. The picture above was taken at 8 a.m., with the sun rising behind the buildings.

Although most visitors to Pisa stay just three hours, I found that the city had enough charm to merit an overnight stay. You can escape the tourist hordes by following the city walls or by going for a walk along the Arno River, which is the same waterway that flows through Florence.

The Arno Riverfront is strikingly illuminated after dark. I took this picture while walking off some post-dinner gelato. When I returned to the Leaning Tower, the crowds had once again dissipated.

Many visitors are underwhelmed by the size of the Leaning Tower. As you can see, it isn’t very tall. I was not bothered by this, however; it fits in with the surrounding buildings and isn’t something obnoxious. The Tower’s lean is a result of poor foundation work on soft soil during original construction in the 12th century.

The grassy swath that comprises the square consists of four structures: the Leaning Tower, the Duomo (Cathedral), Battisero (Baptistery), and Camposanto (Cemetery). A combination ticket gets you into all four sites. The Camposanto, above, is a rectangular mausoleum building with arched colonnades and an inner courtyard.

The Duomo has one of the most stunning interiors of any building in Italy. It is smaller in general scale than its more-visited Florence counterpart, but architecturally perfect and adorned with stunning frescoes. This picture is overexposed, and is an example of the difficulty shooting inside low-light buildings in which tripods are not allowed.

If you wish to climb the Leaning Tower, buy your ticket immediately upon arrival. You’ll be given a time to queue, and can explore the other buildings while you wait. This picture is taken halfway up the tower’s marble steps, which are appropriately worn to one side courtesy of the tower’s roughly 3.99-meter lean.

This image is my favorite of the 15 or so pics that I snapped from the top of the tower. Souvenir stalls line the walkway along the left, and one flank of the city’s wall can be seen running across the middle of the picture. The Battisero dominates the right third of the frame, with the Duomo making up the lower right hand corner. The sea is just out of view beyond the horizon.

A common tourist pose is to have someone photograph you “holding” the Leaning Tower in place to keep it from falling. Here is my attempt; thanks to the random stranger who snapped this.

All pictures were taken with a Canon Powershot camera. All images are the property of GringoPotpourri unless indicated otherwise, and should be used with permission only.