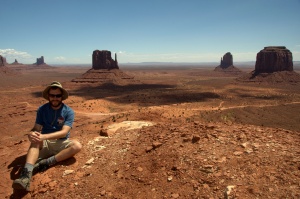 It has been almost three weeks since my last blog post. So much has happened that I’ve barely had a chance to come up for air. But for the next 13 days or so, I’ll have a respite from the usual craziness, and even a chance at my first solo vacation since My (Not Quite) Coast-to-Coast Trip Report of 2014.

Meanwhile, I thought you might appreciate a CliffsNotes-style update on my life, and on things that are of interest to me.  I am still alive and well, Loyal Reader. I promise not to be offline for so long before my next post.

Yesterday marked the last day at my job. I spent what sometimes seemed like four years (but was actually four busy months) at a barely-above-minimum-wage job as a Sales Associate (read: cashier) for a glorified gas station and convenience store. I accepted a position at an inbound call center that is opening up in town. The pay is better, the environment is less stressful, and the advancement potential – I think – is much greater. I start in two weeks!

One positive of the job from which I resigned is that I finally have a couple of local people – coworkers – to call friends. One of them is a former Midwesterner like me, and we share the same tireless work ethic, although he is a Cubs fan whereas I always root for the White Sox. 🙂 Another, a newly-promoted manager at the store, is a complicated but decent young man and a veteran of both the Afghanistan and Iraq Wars. I interviewed him for my blog a few days ago; be looking for that post sometime soon.

I received a lot of overtime at my job, and spent most days off catching up on my sleep. I did enjoy one fun day trip recently, though – I accompanied my parents to historic Jonesborough, Tennessee. Jonesborough is the oldest town in Tennessee, and was founded in 1779, before TN was even a state!

A walk along the main drag through the center of town, appropriately called Main Street, makes for a delightful stroll. Locals beam with civic pride, and the town has been painstakingly restored. Federal-style brick building façades front tree-lined streets with cobblestone sidewalks and gas-burning street lamps. A general store, a courthouse straight out of a John Grisham novel, churches with intact slave galleries, a log cabin that housed future president Andrew Jackson while he attended law school, and a babbling brook complete the storybook image. Here is a picture: 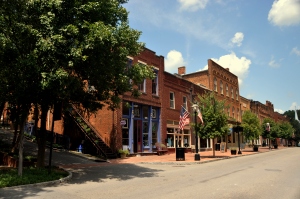 I plan on visiting Nashville and a few other points of interest sometime between now and August 24th, when I start my new job. I have seen Nashville in small spurts, but it is said to be the fastest growing city in the Southeast; it surely deserves more of my time. I might even make it as far as Memphis, where my sister lives and where her enormous swimming pool beckons me. The thing is, I don’t have a plan…or a car. I guess I’ll withdraw some greenbacks from my local financial institution, swing by the local rental car agency one of these days, and hit the road. Anyone want to join me?

Aside from the latest round of MH370 crash speculation following the recovery of airline wreckage in the Indian Ocean, much of the news coverage of late has been of greater-than-usual substance. The Iran deal, race relations in America, the Supreme Court’s ruling on gay marriage…important stuff. And two more that deserve cursory mention:

The 2016 presidential race is on! More and more and more candidates seem to emerging from the Republican clown car, while just two or three have entered the fray for the Democrats. On the Right, all eyes are on Donald Trump (for the moment) while across the aisle, long-time independent/self-proclaimed Socialist Bernie Sanders is generating more attention than many thought possible, considering that his more centrist rival, Hillary Clinton, has been the party’s presumed eventual nominee since 2012.

I most likely will write more about the race in the future; the election is still 16 long months away, with more surprises in store. Who will be the first to drop out? Will Joe Biden enter the race? Will Trump go the distance? Will dimpled chads play a factor as they arguably did back in 2000? Who can say? For now, I am feeling the Bern!

Two weeks ago, social media went crazy with outrage over the killing of Cecil the Lion by a Minnesota dentist. The dentist reportedly paid $50,000 for the “privilege,” and what is arguably more appalling is the fact that Cecil wasn’t even hunted in the traditional manner, but lured out of his Hwange National Park sanctuary with bait. He was beheaded and skinned, and was discovered with his tracking collar missing.

This makes me sick. I have never understood recreational hunting, and I never will. What kind of physical shortfall are these hunters trying to compensate for? Is nothing sacred? I don’t care that Cecil was something of a “celebrity” lion as these things go. It doesn’t matter. The Maasai warriors of Kenya and Tanzania are sometimes forced to kill lions that attack their cattle. This act of defensive killing always causes the Maasai sadness. And what’s more, they at least make use of every part of the lion killed. Meat for food, hide for blankets, etc. Most hunters, on the other hand, pose (with rifles) next to their kill, often with enormous, shit-eating grins on their faces.

In the aftermath of Cecil’s untimely death, it is of little comfort that celebs like Jimmy Kimmel have raised money for animal conservation. Will Walter Palmer face justice for his actions? What about the two Zimbabweans that aided Palmer on his hunt? I hope so, but again, it doesn’t matter. What is done is done. I can only hope that Cecil’s cubs won’t be killed by whichever remaining Hwange pride lion assumes the role of alpha male – something that happens.

I shall conclude by posting one of my favorite wildlife pics from my travels. The lion seen here, in Kenya’s Maasai Mara National Park, is not Cecil. In fact, I don’t know his name.  So I’ll call him Hubert. I snapped this pic as he was awakening from an afternoon nap and having a well-deserved yawn. Who could kill such a magnificent creature? Hubert…and Cecil…this post is for you. 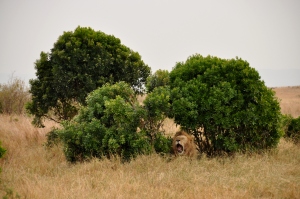 2 thoughts on “A Potpourri of Updates”