This month’s feature takes us back to Europe. Ukraine has been in the news for the past two years, courtesy of Vladimir Putin’s push for returning Crimea and Eastern Ukraine to Russia-proper.

Although I have never traveled to that part of Ukraine before, I did have the opportunity to visit the country’s vibrant capital, Kiev, in 2011, and it remains one of my favorite cities in Eastern Europe. Kiev’s Caves Monastery is the city’s most-visited sight, and draws camera-toting travelers such as myself as well as devout pilgrims of Orthodox faith.

There are several entrances to the monastery complex. The main entrance, Trinity Gate, opens to the largest and most impressive building on the grounds, the Cathedral of the Dormition. Note the detail work around the windows, the image of Christ and – I think – Moses on the upper façade, and the golden onion domes on top. 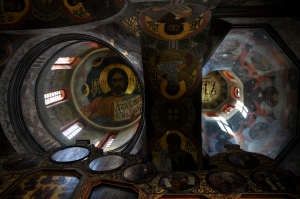 The cathedral is even more stunning on the inside. As you can see, nary an inch of the interior is unadorned with frescoes depicting Jesus, the disciples, and the Virgin Mary. 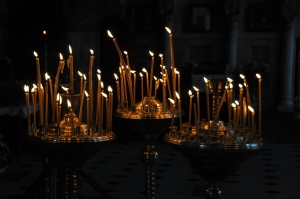 Other churches dot the premises as well. Although still covered in religious art as is standard in most Orthodox churches, these buildings make use of only natural light. 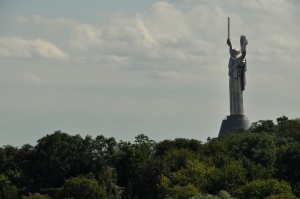 Views are impressive, and extend for miles. Rodina Mat, the statue in the above pic, is colloquially known as “Tin Tits,” and is actually part of the Museum of the History of Ukraine in WWII – itself a worthy site – located two kilometers to the south. Note that the tip of the sword is shorter than originally molded, so as not to exceed the Cathedral of the Dormition in height. 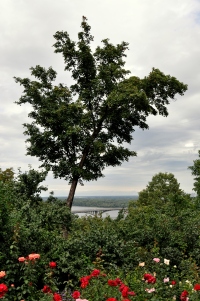 Looking east, the Dnipro River abuts the bottom of the monastery grounds as it winds its way towards the Black Sea. Across the river is residential Kiev, where litter-strewn beaches back up to stupendously ugly, Communist-era apartment blocks.

Lovely gardens slope downhill towards the river, passing tiny chapels such as the one photographed above. Babushkas wait to drink and bottle holy water from a faucet connected to a spring beneath the chapel. 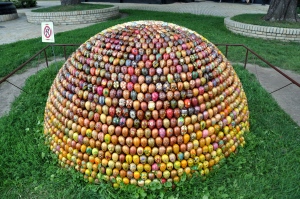 I was surprised to see an array of art – including contemporary sculptures such as the one pictured here – spread across the grounds. This piece, made of roughly 1,500 painted wooden Eggs, is entitled “The Sphere of Good and Spiritual Renaissance.”  The artist: Ukrainian master Oksana Mas. I read that her work regularly sells at Sotheby’s; read more about Mas here. 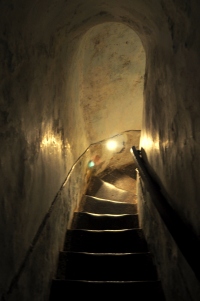 So what of the “caves” that give the Caves Monastery its name? Two underground passageways are the burial sites for over 100 monks and saints. They are entombed in glass-topped coffins. Though covered in burial shrouds, their mummified, skeletal hands, folded in prayer, poke through. Pilgrims light a candle as they enter; its not uncommon to see them kissing the coffins. Photography inside the caves is strictly forbidden, the access stairway in the image above was as close as I could get. 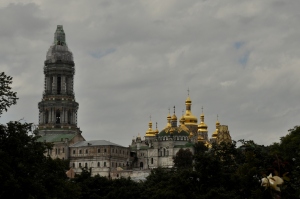 I am not Orthodox, nor am I Christian, nor religious at all. That said, I was floored by the Kyiv Pechersk Lavra, the Kiev Caves Monastery. The grounds were lovingly tended to, the caves were simultaneously creepy and spiritual, the art was pleasantly surprisingly, and the buildings were suitably humbling.