This month’s entry takes us to a new continent and hemisphere. Roughly one dozen nations across South and East Africa are home to lions, elephants, and gorillas (oh my!), and despite still-dwindling wildlife numbers, there are innumerable game parks to choose from for seeing these beasts, and others, in their natural environment.

I recently published a three-part entry about my 2010 encounter with mountain gorillas in Uganda. You can access Part One of that series here; it is a personal favorite among my 150+ blog entries so far. One of my companions from that trip, my friend Mark, requested that I write about another safari from that same trip. Mark – and others – here are a few pictures and anecdotes about Maasai Mara National Park, Kenya. 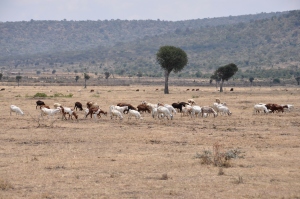 The long, dusty drive to the park passed sun-bleached pastoral scenes such as the one above. These sheep were led by a young boy. He ran up to our van to say “jambo” (“hello”) while we stopped to change a flat tire and stretch our legs. His herd waited patiently for him to return.

The shepherd boy (middle) was soon joined by his friends, dressed in Maasai robes. Their mile-wide smiles are exemplary of the impossible friendliness of the Kenyan people. These impoverished kids face a hard life of protecting sheep, goats, and cattle from lions in year-round drought conditions…and somehow seem more spiritually-content than most Americans, Canadians, or Europeans. There is a lesson here, I think. 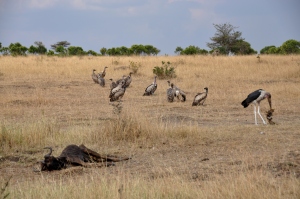 After checking into our four-star accommodations, the Maasai Sopa Lodge, we set out for a sunset safari. Massai Mara National Park is famous for its wildebeest, and we weren’t on the road for more than five minutes before encountering the scene above, of a wildebeest that had been taken down by something faster than he was, feasted upon, and then left behind for the avian scavengers. Nature in the raw. It is what it is. 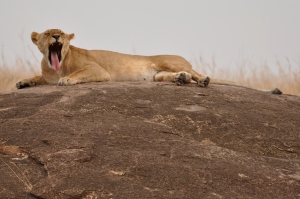 Lioness! This exhausted mother was either settling in for the evening or just waking up from a nap. 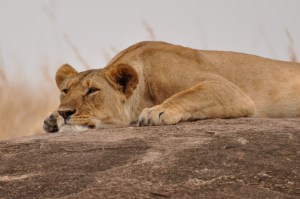 One of her cubs wandered right past our van and headed towards this wildebeest smorgasbord. Methinks he’ll be a great hunter one day. 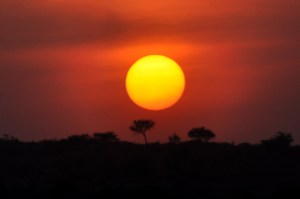 It isn’t everyday that you witness sunsets as spectacular as those in Africa.

Day Two. The life of a wildebeest is a cruel one. Every year they migrate across the grasslands of the Serengeti, following ever-diminishing water sources. Their migration pattern is the same year-after-year, despite the many predators that lie in wait.

Africa’s wildebeest number in the millions, and I’ve always wanted to witness their migration. Even when compared to my gorilla encounter, this spectacle is probably the most incredible natural phenomena I’ve seen. 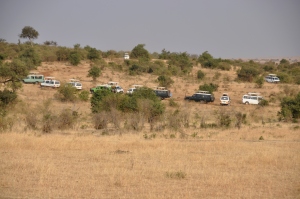 The national park is huge, and you can drive for hours without seeing another vehicle. Every now and then, however, radio buzz about a rare animal sighting sends all safari vehicles to the same point. In the above instance, we received word about a family of cheetahs – exciting stuff!

The scoop was valid – here is mama cheetah…

…and here is baby!

My primary school field trip destinations never even came close to this level of awesomeness. 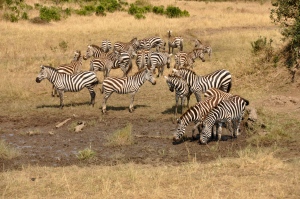 This is what passes for a watering hole in great swaths of the Serengeti. I was fascinated to observe this harem of zebras keep a collective guard for predators in the surrounding brush while, two-by-two, their members take turns getting a drink.

Moses, our guide, had eyes like a hawk. He was constantly pointing out animals in our periphery, many of them seemingly hundreds of yards away. U.S.-based Kenya.com outsourced his guide services from local provider Dallago Tours. Funny story about this picture. We were hours from nowhere and in dire need of a restroom. Moses put the van in park, sniffed the air for the aroma of scat, and proclaimed this random patch of unprotected roadway a safe place for a bathroom break.

This svelte, lynx-like feline is a serval. No idea what he was looking at.

Our second day concluded with a visit to a Masaai village. You’ve no doubt heard of the Massai, a “warrior” tribe of cattle farmers famous for their slenderness, their kindness, and their ability to rise from a deep sleep to a state of complete alertness. The Masaai (also spelled “Masai”) greeted us with an exuberant jumping ceremony. 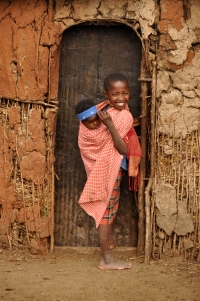 Incomprehensible poverty…and yet another beaming smile. 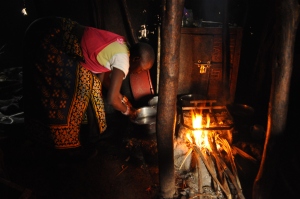 This Masaai woman is about to boil water on her makeshift kitchen stove in preparation for dinner. Her house was built from baked earth, reinforced with wood and twigs. 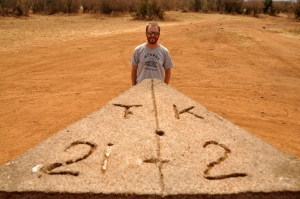 Day Three promised to be the most exciting of all. It began with a surprise visit to the fenceless border between Tanzania and Kenya. 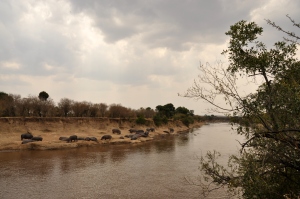 Hippos! The above photo was taken on the Kenyan side of the Mara River. Hippos are responsible for more human deaths than any other predatory animal in Africa. Give them a wide berth.

Do you remember watching PBS documentaries in which hundreds of wildebeest would rush across a river towards the banks on the other side, only to be taken down by half-submerged crocodiles? That’s this place! Here, the biggest crocodile in the universe sunbathes following his wildebeest breakfast.

“Quiet, gringo! There is something over there!” 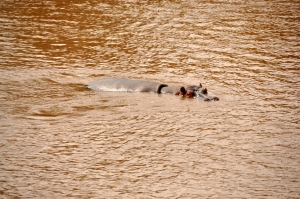 This hippopotamus apparently has no fear of crocodiles. Maybe crocs and hippos have negotiated a peace treaty? Maybe crocs don’t like the taste of blubber? 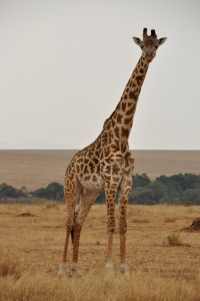 With so much gruesomeness in the Serengeti, all of it a part of the circle of life, I wanted to conclude this entry with an image that evokes a sense of peace. My own soul has seldom felt more at peace than it did during the six collective weeks I spent in sub-Saharan Africa.