The barrio bravo, or “tough neighborhood,” of Santa María la Ribera is a place in transition. It is located far enough west of Greater Tepito, and close enough to prosperous Reforma, to be in the “safety zone,” but it also abuts Buenavista Train Station, which connects Mexico City’s Distrito Federal with a dozen cities and towns in adjacent, sprawling Estado de México.

Santa María la Ribera is most famous as being the new, permanent home of the Kiosco Morisco, or Moorish Kiosk. The reddish kiosk/pavilion was originally built by Mexican engineer José Ramón Ibarrola for the 1884 World’s Fair in New Orleans. Post-exposition, it was moved to the Alameda Central (Central Park of Poplars) on the western fringe of the Centro Histórico. The kiosk was eventually relocated to Santa María’s own Alameda de Santa María during the presidency of Porfirio Díaz, who ordered the building of a monument to Benito Juárez in its place at the Alameda Central. Residents of Santa María beamed with civic pride, and volunteered to look after the kiosk. At that time, their neighborhood was one of Mexico City’s wealthiest.

Santa María thrived for several decades, until the earthquake of 1985, which forever changed the neighborhood’s demographics. After the quake, displaced residents from Tlatelolco and elsewhere restarted their lives in Santa María. The kiosk – and the barrio itself – quickly fell into disrepair during the city’s crime-ridden next two decades.

It wasn’t until 2003 that renovation of the kiosk got underway. The task was monumental; the entire structure is made of wrought iron, which had to be treated for rust. Additionally, stained glass panels inside the cupola had to polished, if not downright replaced. The kiosk’s red and blue ornamental pattern, like something you might be more likely to see in Spain’s Alhambra, had to be washed and re-glazed. The park in which the kiosk resided needed a sprucing up as well.

The effort was worth it.  Colonia Santa María la Ribera was designated a Barrio Mágico in 2011, and the entire area is undergoing a wonderful renovation and gentrification of late. There is much to see today.

In addition to the Kiosco Morisco and Alameda de Santa María, the square-block center of the barrio features a large, Art Nouveau building that plays host to the Museo del Instituto de Geología UNAM, or Museum of the Geology Institute of the UNAM (National Autonomous University of Mexico). Entrance is cheap, and allows you to get a look at minerals, dinosaur skeletons, and 3-D cutaways of the earth’s core.

A few blocks south of here, closer to the hubbub of Paseo de la Reforma, is the Museo Universitario del Chopo, or Chopo University Museum. There isn’t much to see inside, save for changing exhibits of contemporary art, many of them by students, but the museum catches your eye from the outside: twin towers, resembling an Art Nouveau train station or market hall, stand out from much of the surrounding cityscape.

Speaking of markets, Mercado del Chopo is something of a curiosity for goth/metal fashionistas, or for those gatos curiosos who simply enjoy people-watching. Located several blocks east of the Alameda – and technically leaving Santa María for adjacent barrio Buenavista, Chopo Market is an outdoor weekend market specializing in leather clothing, concert T-shirts, LPs, and bondage-wear. I was warned not to take pictures during my visit to Mercado del Chopo, as the sale of soft drugs here is basically out in the open, but I still managed to capture a few pics of the stalls themselves.

Fans of modernist architecture won’t want to miss Biblioteca Vasconcelos, just a few blocks southeast of Mercado del Chopo. Vasconcelos Library doesn’t look like much from the outside, but step inside and your jaw drops. Stacks of books on metal shelves hang suspended from a high ceiling, and Gabriel Orozco’s “Baleena” sculpture hovers just above your head. The whole place is like something out of a Philip K. Dick short story. Note that you’ll have to obtain permission to take photos from the circulation desk at the rear of the building.

The million dollar question at the center of each entry in my Barrios Bravos series is exactly this: Is it safe?

The answer, time and again, is: For the most part.

I felt safe walking around Santa María de la Ribera on the sunny weekday that I had visited. The hustle and bustle of nearby Buenavista Train Station, which also serves as a transit point for the Metro and Metrobús, had me exercising more than the usual caution about my surroundings, but then again, most passengers were college students visiting the library, or office workers commuting to their Estado de México suburbs.

I noticed a handful of dilapidated buildings as I got closer to the Alameda, but that isn’t necessarily cause for alarm. In fact, they added to the up-and-coming charm of the neighborhood. Ditto to the colorful graffiti that marked a couple of building courtyards; it wasn’t violent or profane in nature, but rather whimsical.

My visit to Mercado del Chopo took place on a different day, and I did feel nervous about my surroundings. I was in the company of my ex-girlfriend at the time, aka She Who Shall Not Be Named. We arrived at Chopo Market to discover, to her horror, that she was the only person around to wear a pink shirt (everyone else wore black)! She was a good sport about the whole thing, but was definitely cognizant of the fact that she – we – stuck out like a sore thumb. Still, I can’t blame all of my fear on her fashion ensemble; I knew that I was close enough to Tepito and Guerrero to be outside of my comfort zone; at that time I had yet to seriously explore either barrio bravo and learn that things are not always as they first appear.

Bad things can happen to anyone, anytime, anywhere. Santa María la Ribera experienced enough crime during those tumultuous 80’s and 90’s that its reputation as a barrio bravo is more noteworthy than its recent rebranding as a barrio mágico. During one of my last months in Mexico City, I asked a girl to meet me for a drink in Santa María. Her response? “No way, gringo. That place is dangerous!”

How unfortunate. Time, and declining police reports, will hopefully change such negative perceptions. Boutique shops will open up, artists will take up residence, curb appeal will improve, and civic pride will return. 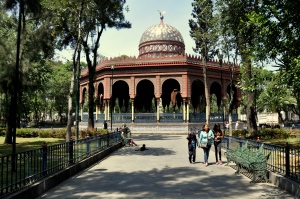