It is mid-November as I write this, and though technically still autumn, it feels like winter. One of my Facebook friends posted pics yesterday of holiday lights in Lucerne, Switzerland, while another friend posted a single image of snowy Moscow, taken from the roof of his apartment building. Here in Tennessee, a local music station is already broadcasting Christmas music. Temperatures last night dropped to 30 degrees, and I’ve even had to start wearing underwear again!

As such, for this month’s photo feature I thought I would share pictures from a warmer place and time. It was in September of 2009 when I visited Croatia, and was fortunate enough to be able to bask in late season Mediterranean sun. Croatia is famous for its beaches, of course, but the country as a whole also has much to offer to history buffs. In particular, the dazzling Old Town of Split. 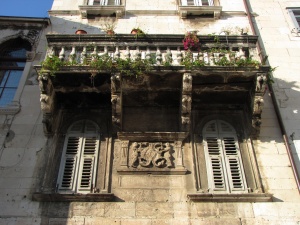 Although Croatia’s language is Balkan in origin, the country’s coastal architecture and climate is Mediterranean in spirit. This includes the siesta culture. Whoever lives in the flat pictured above is likely enjoying a respite from the midday heat…before staying up until the wee hours of the morning.

The substructure and ruins of Diocletian’s Palace, a UNESCO site, make for an atmospheric, subterranean ramble. The Roman cavalry commander ruled over Dalmatia (present-day coastal Croatia) from 234 to 305 A.D.

The above sketch shows what the palace looked like during Diocletian’s reign. Much of Old Town Split falls within what remain of its walls.

The Cathedral of St. Domnius, where Diocletian is entombed, was once part of the palace complex. You can climb the stairs of the tower for some impressive views during daylight hours, but I recommend lingering outside come nightfall to see the cathedral illuminated as it is in the picture above. 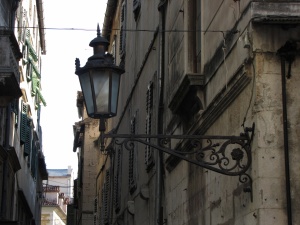 …alongside red-roofed houses and purple bougainvillea…

…passing sunbathing cats who have nary a care in the world…

…eventually depositing explorers at idyllic waterfronts such as the one seen above.  This is Bačvice Beach. As urban beaches go, you can do much worse.

A common sight in most Mediterranean cities and towns is the daily produce and seafood market. Old Town Split is no exception. 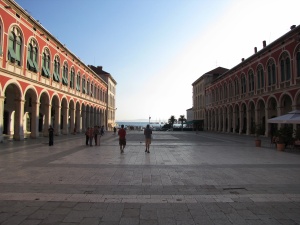 In comparison to more-visited Adriatic cities such as Venice and Dubrovnik, Split feels like something of a well-kept secret. The square pictured above reminds me of Piazza San Marco in Venice…but without the tourists.

A long seafront promenade extends from Bačvice Beach, passing Diocletian’s Palace and a series of sidewalk cafes, en route towards residential, modern Split. An afternoon walk along this paved malecón is great for bronzing, John Boehner-style, while an evening stroll lets you enjoy the cooling breeze with less urgency.

All pictures were taken with a Canon Powershot camera. All images are the property of GringoPotpourri unless indicated otherwise, and should be used with permission only.