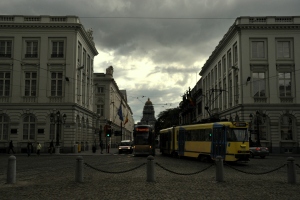 For at least the seventh time in two years, terror has once again reared its ugly head in Europe. A coordinated pair of attacks on Tuesday – one on Brussels Airport, the other on the Brussels metro, left 31 dead and the country in virtual lockdown. I saw a story on the local news about an East Tennessee retired couple whose son and daughter-in-law have been travelling in Brussels, and who the parents haven’t been able to get ahold of since this past Tuesday. Stories such as this one bring the violence closer to home. I hope for the best, but prepare to grieve with them, as not all bodies have been identified yet. (For more information, go to brusselsmissing.com.)

Not even ten days earlier, a suicide bomber detonated himself in the upscale shopping district of Beyoğlu, in the heart of Istanbul. Six days prior, an attack in Ankara, the capital of Turkey, left 37 people dead. Just four months before then, in October, 2015, Ankara was attacked again. Two bombs were detonated outside the central train station, killing 103 Turks. Roughly three months prior to that horrific attack, Suruç, in southern Turkey, was the site of another bombing, which killed 33 locals and is said to be in retaliation for Turkey’s involvement in the Syrian Civil War. And we already know of the terror that has besieged Paris more than once, starting with the Charlie Hebdo massacre in January, 2015 and continuing with stadium, café, and concert hall bombings that November.

By my count, that is seven attacks. This number doesn’t even factor in acts of terrorism elsewhere around the globe, such as the December, 2015 office shooting in San Bernardino, California, or the countless atrocities committed almost daily in Iraq, Syria, Somalia, Nigeria, etc. I am speechless. What can one person do in the face of such senseless hate?

The attacks on Brussels struck a nerve not only because they appear to be in retaliation for the hard work by the Brussels police in helping track down the Belgium-based plotters of the recent Paris attacks, but also because Brussels is the political heart of Europe. The European headquarters of NATO are here, as are the central offices of the European Union itself.

With its huge airport, labyrinthine city center, and busy dual train stations, it is difficult to believe that the official 2015 population of Brussels, at least according to Wikipedia (citing UN data), is just 175,534 people. The metropolitan area, however, is home to over 1.8 million people. That figure sounds more like it. Brussels train stations are a hive of activity, its restaurants and bars packed, its hotels frequently overbooked.

The city’s main square, La Grand-Place, is the place to be on a warm spring or summer evening. Former guildhalls during the Renaissance era are lovingly maintained, and I have read that the entire square becomes a carpet of begonias during the month of August. During my two trips to Brussels, I observed groups of young people sitting, Indian-style on the cobblestoned plaza, drinking coffee, socializing, and eating copious amounts of pommes frites (French fries), liberally doused in mayonnaise. “They should really be called Belgian fries,” insisted a Belgian college student that I met on my travels. She is right; France isn’t the inventor of French fries any more than Italy is the inventor of spaghetti and meatballs!

But I digress. La Grand-Place is a great place (no pun intended) to start any number of meanderings through the medieval center of Brussels. Go one way and you’ll run into what little remains of the Old City Walls. Go another and you’ll pass the blink-and-you’ll-miss-him Mannekin Pis, that overrated, yet somehow irresistible, 400-year-old statue of a young Flemish lad urinating. Despite the 24/7 surveillance cameras focused on the Mannekin Pis, he is regularly dressed by locals in whatever garb suits them, as you’ll see in the photo below:

I have been told that a female counterpart to the Mannekin Pis is a more recent sculptural addition to the Brussels streetscape, and that she – Jeanekke Pis – is off the beaten touristic path and harder to find. I read this morning that the Mannekin Pis himself has been turned into a symbol of anti-terrorism since Tuesday’s attacks. This makes me smile.

Other attractions in or around the city center include Galeries Royale St-Hubert, Europe’s oldest galleria, featuring two rows of shops – confectioneries, mostly – that are open to the elements on each end but covered from above by an elegant glass atrium. Do not be surprised to find the chocolate on offer here to be in the shape of the Smurfs, who were born in Belgium, or of Tintin, that boy of Belgian comic books renown who got his own feature film in 2011, courtesy of Steven Spielberg. 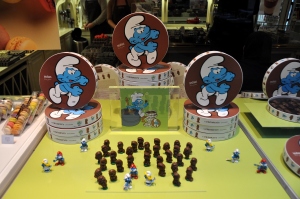 A pair of side-by-side art museums on one of Belgium’s hills, midway between La Grand-Place and the EU district, merit a visit for the museum lover. The Magritte Museum, all about surrealist René Magritte, shouldn’t occupy much more than hour of your time, while the adjacent Royal Museum of Fine Arts is a treasure trove of Old Masters. The collection of Benelux art by Peter Paul Rubens and Anthony van Dyck, to name just two, is something to marvel at.

Heading east from here, you’ll pass the Notre-Dame-esque St. Michael’s Cathedral, which has never been open during the hours that I have happened upon it, and the Congress Column soon afterwards. The column is topped with a statue of King Leopold I, while an eternal flame at its base burns in honor of Belgian victims of World War I. Cross the street and in no time you’ll enter Parc de Bruxelles, a green lung for the city and the site of frequent demonstrations and open-air art exhibitions. During my last visit, in 2012, I stumbled upon a wonderful display of sculpture art at the park in the shape of Brussels sprouts, mussels shells, beer steins, and French fry cones. I rather like the one pictured below, of a stork delivering a sprouts-shaped baby:

Further afield, fans of science might get a kick out of the Atomium, the 102-meter tall replica of a giant atom, built for the 1958 World’s Fair and slowly rusting away. Adjacent to the Atomium is Mini-Europe, a pint-sized park featuring pint-sized replicas of Europe’s most famous monuments, including, of course, La Grand-Place. The fact that the Atomium is the most-visited attraction in Brussels says less about its majesty as a monument and more about people’s affinity for kitsch.

A Few Sentences about Bière

Belgian beer is among the best in the world, and a night spent sampling the country’s blanches, blondes, abbayes, and spéciales is a night well spent. The quickest of web searches revealed that Belgium, one of the smallest countries in Europe, has over 200 breweries manufacturing 1,150 unique meads. A 2012 wander through a multi-ethnic neighborhood near Gare de Bruxelles-Midi (South Railway Station) led me to Brasserie Cantillon, a 116-year-old, organic brewery in which production is so controlled that the finished product has virtually no head, and more closely resembles a glass of wine! 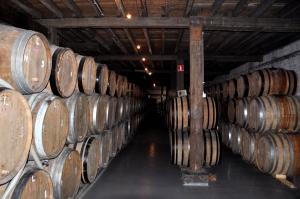 Later that same night, I joined a group of Montrealers from my hostel on a pub crawl across the city that ended at a place called Delirium – one of those palatial, beers-of-the-world joints, located off a pedestrian alleyway somewhere in the city center. I tried a few bières that I had never tasted before, and made room, too, for Chimay Bleue, a nine percent-strong, monastery-made bottle of divine goodness. It was some wonder that I could even move the next morning. Those damn Trappists. 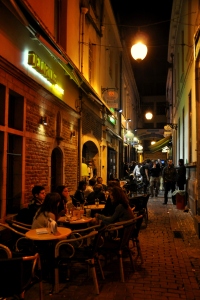 Brussels is seldom mentioned in the same breath as Paris, London, and New York as one of the world’s great cities. It isn’t the easiest of cities for pedestrians to navigate, it lacks the waterfront and canals of other Belgian cities such as Bruges, and its dual languages – French and Flemish – prove especially intimidating to the linguistically-challenged.

But what happened in Brussels on Tuesday was an abomination. Whatever your personal belief is regarding the unfortunate political maneuvering by the West on Syria, Iraq, and the Greater Middle East, innocent commuters don’t deserve to lose their lives in coordinated attacks by would-be martyrs. That being said, the suicide bombers were merely patsies – most of them uneducated, confused, and coerced into the lifestyle because they had been searching for someone to blame for their lot in life. The masterminds behind the planning, whether dead, behind bars, or in hiding, are the real cowards. The 2005 political thriller “Syriana,” which not enough people saw, did an admirable job connecting the dots behind big oil, foreign intervention, poverty, empire building, and terrorism. “Everything is connected,” the film’s tagline read, and I couldn’t agree more.

While writing this, I have been continually thinking about the question I posed in the third paragraph of this blog post: What can one person do in the face of such senseless hate? The answer is two-fold. First, think long and hard about who you will vote for in November. Whoever wins the election – and I know that it is, by-and-large, a dismal list of candidates – may nevertheless determine whether we see a gradual turning of the tide, or just more of the same violence ad nauseam. Second, don’t stop traveling. Go to Brussels. Go to Istanbul. Go to Paris. Do not give in to fear.

If we stop living our lives to the fullest, then the terrorists will have already won.

2 thoughts on “Thoughts about Belgium”