Last June, I published a blog entry that was near and dear to my heart. In it, I wrote about my paternal family tree. I first told of my grandfather, a WWII sailor, Middle East adventurer, Paraguayan coffee plantation owner, and Prohibition-era beat cop who fathered eight children with three different women. I then blogged about my grandmother, an incredible cook who outlived three husbands and had a closet filled with identical-looking blue house dresses. Finally, I introduced Loyal Readers to my father, a decent man and Army vet with an encyclopedic knowledge of baseball and a functional case of obsessive-compulsive disorder, the latter of which is simultaneously annoying and endearing.

But that is just half of the story.

My mom is the oldest of three sisters, all of majority-Polish descent. Her parents were both born in Chicago, and were the children of European immigrants and the first in each successive family tree to speak English. As was the case with my father’s parents’ parents, someone Americanized the spelling of the family surname – in this case from “Potyrala” to the more aesthetically-pleasing “Poterala.” Somewhere along the way, a Potyrala married into Lithuanian lineage, although little is known by my mom about that branch of the family tree.

My mom, for all intents and purposes, is an orphan. Her father passed away when she was young, and she claims to have just one memory of him: sitting on his knee while he played the accordion (a talent that she once possessed as well). Her mother lived longer but was overcome with grief and, alas, wasn’t a big figure in her children’s lives. Fortunately, my mom has a knack for genealogy, so she – and I – have been able to learn more about her side of the Gringo family tree.

It is a sad story, so you might want to have a box of tissues handy.

I never met my mother’s father, Stanley. In fact, my mom has almost no memory of him either. Stanley, who worked at a printing press, died of tuberculosis before my mom was five. Although my mom was the oldest of three children, all sired by Stanley, her only memory of him, as I mentioned earlier, is sitting in his lap while he played the traditional polka “Who Stole My Kishka” on the accordion. And while the image of squeezebox-playing Poles is fodder for countless ethnic jokes, my mom swears that story is true.

Grandpa was born in Chicago, but moved around a lot as a child. He was drafted into WWII while in his early twenties and was stationed in Camp Forrest, located near the Georgia state line in southeastern Tennessee. The “Forrest” of the title is Nathan Bedford Forrest, a Confederate Civil War general whose very name generates controversy. Forrest was a slave owner and is generally attributed as being the founder of the Ku Klux Klan.

My mom has taken advantage of her Tennessee residency to learn as much about Forrest as she could. She has visited his boyhood home (now a state park) and has even met one of his great-great grandchildren. My mother and father both insist that Forrest treated his slaves with compassion, and swear that the KKK he started was merely a gentleman’s club, twisted into something evil many years later. Tennessee historians and Civil Rights activists continue to butt heads regarding Forrest’s benevolence to this day, and I suspect that the real truth about the general as a person lies somewhere in the middle.

But I digress. My mom never knew much else about her father. Mom knows that his mother was born in Lithuania, and that his father was born in Breslau, Germany (now Wrocław, Poland). It was only within the past few months that she learned, courtesy of a DVD-Rom from the military archives, that Stanley himself suffered an injury to his eye while in the Army, as well as a childhood broken arm playing baseball.

I wish there was more to tell. Alas, that’s all the information that we have.

I never met my mother’s mother, either. Alice Poterala died when I was an infant. After fathering three “Baby Boomer” children by husband Stanley, she became a widow following Stanley’s unfortunate passing from TB. Alice collapsed from grief and found solace in the bottle. Her children became wards of the Catholic Church, and saw Alice on all but the rarest of occasions. 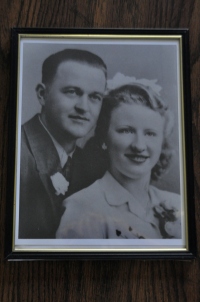 Alice, whose parents were both born in the Tarnow region of Poland, was a homemaker while married to Stanley.  Once she succumbed to grief and had her children taken from her, she never recovered. Alice rarely visited her children (which broke my mom’s heart), and when she did, later in life, it was always in the company of an abusive male companion named Sixto. My mom told me that Sixto, whose breath always reeked of booze, bore a pedophile’s mustache and a greasy ponytail to go with it. He called himself her “new daddy.” To my mom, naive and lacking positive maternal and paternal role models, this was the stuff of nightmares.

My mom was born in 1946. Following her father’s passing, she and her sisters were raised by nuns at a suburban Chicago orphanage that has since burned down. My mom’s youngest sister, Jackie, fared best when she was adopted by a wealthy religious family. But imagine the trauma for a young girl to be separated from her sisters, pretty much the only givers of love that she had ever known. It was only natural that, with the passage of time, my mom and her middle sister, Barbara, saw Jackie less and less frequently…and finally not at all.

After middle school, things got worse. My mom was sent to a different orphanage than her sister Barbara. The new orphanage, which still exists in the northwest suburbs of Chicago, was a place of contrasts. On the one hand, the grounds were spacious and the donations by wealthy Catholic patrons kept everyone well-fed and well-educated. Field trips and summer camps were common, and alumni were always welcome.

On the other hand, children residing there were spoon-fed contradictory church doctrine by the Bible-full. And then there was the abuse. Not sexual, but physical and emotional. Mouth off to the nuns, and you were beaten with a ruler or dragged off to a darkened closet by your earlobe to pray. Straight out of the movie “Carrie,” you might think, and that seems pretty close to the mark. Other movies that set a similar scene? “Doubt,” from 2008 and featuring Meryl Streep, and the Judi Dench-starring “Philomena,” from 2013.

As a child, I remember my mom always pushing me to try my hardest in school, and to nurse my talents in music and art. She would frequently wax nostalgic about the one nun who went out of her way to give my mom piano lessons, or to spend time with my mom after the bell rang to help her prepare a book report. My mom would then turn sad, recalling how, on the day of her presentation, her mother Alice, who had insisted she would be there to see my mom’s presentation, didn’t turn up. It was always the same sad story, and it was always followed up with a guilt trip by my mom about how lucky I was to have parents who care. I didn’t particularly care for the lecture (I still don’t), but all the same, I can only begin to imagine how heartbroken my mom must have felt when the seat she saved her own mom at the head of the class remained empty.

My mom’s tenuous relationship with her mom and her siblings grew more strained when my mom, staunchly Catholic, married my dad, raised Lutheran but with agnostic tendencies, and they agreed as a couple not to tie the knot in church. Once they decided to raise my sister and I without any particular religious affiliation so that we could decide for ourselves when we were older – a decision I did not understand as a child but one that I greatly appreciate today – Alice, Barbara, and Jackie removed themselves from my mom’s life altogether. She hasn’t had a word with any of them since then. Because of religion. 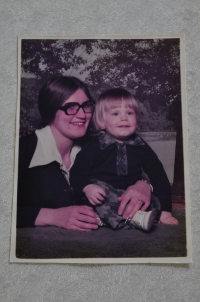 My mom is just two days shy of her 70th birthday as I write this. After uploading the blog post online, I will drive to Knoxville and visit her in the hospital.

Perhaps 12 years ago, my mom was diagnosed with a rare, unpronounceable disease that, while neither contagious nor hereditary, caused her some alarm. She has a surplus of white blood cells, and they release the wrong amount of histamines into her body. For several years she lived painlessly with the disease; she merely had to give up alcohol and be extra careful which medicines she put into her body.

With much painful fanfare but little advance warning, however, her disease has suddenly – literally overnight – morphed into mast cell leukemia. The past two months have been a bleak nightmare of hospital stays and health complications.

The funny thing is, my mom – and I definitely get this quality from her – has never been one to go to the doctor. She and I both believe that, with a few notable exceptions, medicine is poison. But her summer kicked off in painful style when, while visiting my sister in Memphis, she reached too high for something in an upper kitchen cabinet and heard something in her lower back snap. She collapsed to the floor in pain, unable to move. It wasn’t until two days later that she agreed to go to the hospital. She had ignored feelings of lethargy all month long, and turned a blind eye to the unexplained bruises that ran up and down her arms. But the doctors didn’t ignore these things.

“If she hadn’t gone to hospital when she did,” one of the Memphis doctors told us later, “she probably would have fallen asleep one night, drifted into a coma, and never come out of it.”

The last time I saw her, three days ago, I barely recognized her. Chemotherapy had taken its toll, and she weighed 50 pounds less than she did at the beginning of 2016. “Say something, son,” she said to me in a barely-audible voice during my last visit with her. “The dog misses you,” was all that I could muster for a reply. Some son, eh?

But you see, this frail woman is not my mother. My mom is strong-willed and stubborn, quick to smile and even quicker to judge. That incontinent person in the hospital bed, her voice raspy and her lips chapped from the all the drugs that have been fed to her intravenously, simply cannot be the same person. “I want you to find out who is the head nurse and file a complaint with her on such-and-such nurse’s aide, who looked at me funny this morning,” she said to my dad during a recent visit. Now that sounds more like the mom I know.

6 thoughts on “Where I Come From – Part Two”