Asia is the largest continent and home to 60% of the world’s population, according to UN estimates. If you visit worldometers.info, you can literally watch the population “uptick” by one person per second. Despite these statistics, however, I have spent less time in Asia than I have in most other regions of the world. This needs to change.

One Asian country that I have had the pleasure of visiting is Thailand. The country, a peaceful monarchy east of Myanmar and north of Malaysia, is famous for its warm waters and sandy beaches, often backed by towering cliffs. There is so much more to see, however. Elephant camps, jungle villages, steamy urban cities…and temples. Lots of temples. I was particularly taken by the Buddhist temples of Bangkok. 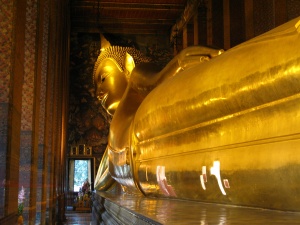 The city’s finest temples line the Chao Praya River. One of the most popular among them is Wat Pho, also known as the Temple of The Reclining Buddha. The Buddha, pictured above, is relaxing and seems at peace. 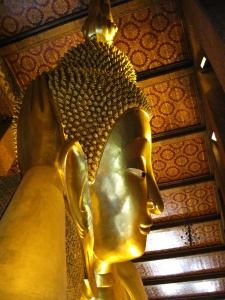 I won’t pretend to be an expert on Buddhism, but it would appear that this incarnation of Buddha has achieved Enlightenment. His gold-gilded head is the size of a normal person. 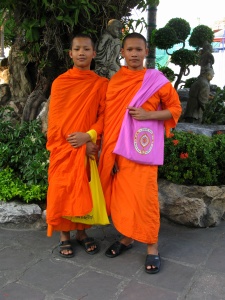 Novice monks, wordless but quick to smile, on the grounds of Wat Pho. 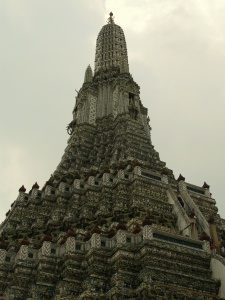 Wat Arun – the Temple of Dawn – is across the river from Wat Pho. The ornate stupa pictured above is the centerpiece. Stupas house Buddhist relics, typically the remains of deceased monks or nuns.

You can climb the steep staircase to one of the upper terraces of the stupa for a panoramic view. Notice the terracotta detailing; while no doubt holy, some of it seems more at home adorning, say, the Watts Towers of Los Angeles than a Buddhist shrine. 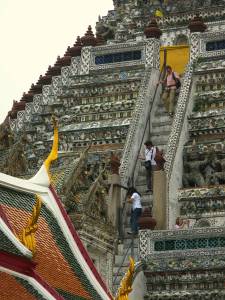 If you do make the climb, watch your step! 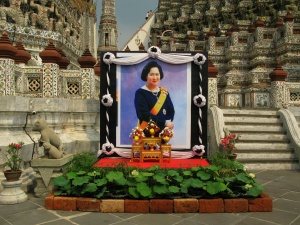 Thais revere the royal family, and images of the king, Rama X, and queen regent, Sirikit, are commonplace. The flattering image of Sirikit featured above likely dates back several decades; she died last year at age 84. Do not speak ill of her while in Thailand. 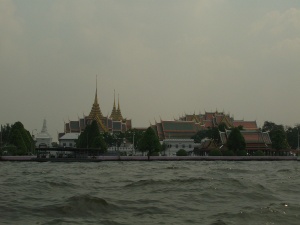 Our river cruise to Wat Arun took us past Wat Phra Kaew, better known as the Temple of the Emerald Buddha. 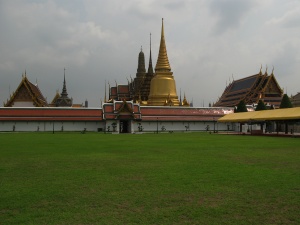 The striking, multi-spired temple complex is Bangkok’s largest, and a thorough visit can easily eat up several hours of your time. 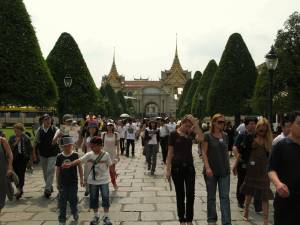 Alas, Wat Phra Kaew is also the most crowded. 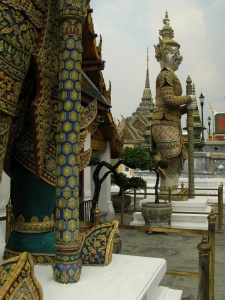 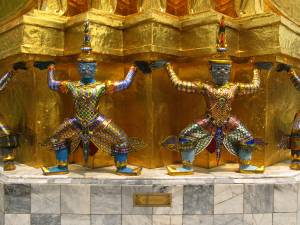 Here, miniature versions of the same figure support one of the stupas, gold gilded and dazzling on a sunny day. 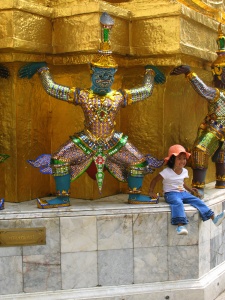 I am fairly certain that this sort of thing is frowned upon. 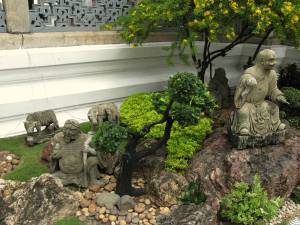 Every Buddhist temple that I have visited on my travels includes a garden. Often, it is little more than a dozen square feet, but it is a peaceful touch and an important one, too – it was while sitting under a tree that the religion’s founder, Siddhārtha Gautama, received Enlightenment…2,500 years ago. 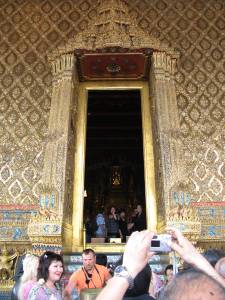 If your idea of the Emerald Buddha was something on the scale of the Reclining Buddha shown in earlier pics, check your expectations at the door. (Also, I hate taking pictures over people’s heads, but photos were not allowed inside the shrine itself, so this is as close as I could get. Ugh.) 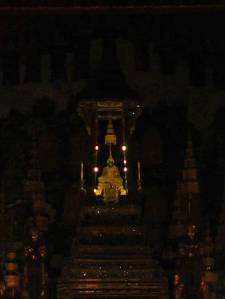 Is that better? Cropped and touched up…but still a bad pic. 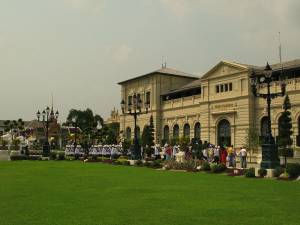 The grounds of Wat Phra Kaew also include the Grand Palace, ruling residence of Thailand’s king and queen. We happened upon the Changing of the Guard, and followed them as they marched past the palace itself. 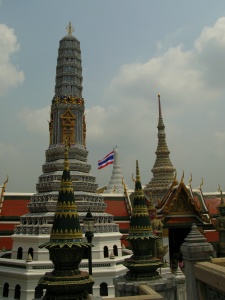