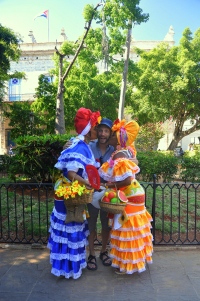 I have not, historically speaking, been good at photographing people. From time to time, I’d notice a person during my travels who had that photogenic something that I knew needed to be captured, and – after getting their permission – I would try my best to photograph them, being cognizant of their time and any cultural sensitivities. I always made it a point to show them the picture afterwards, and frequently offered to email them a copy of the image.

The results were mixed, however. That gap-toothed Asian woman along the Jinshanling section of the Great Wall?  I captured the smile but didn’t zoom in enough. The curious boy standing near the Istanbul tram that ran through Sultanahmet? He posed, soldier-like, but I forgot to crouch down to his level, and his head appeared the size of a giant pumpkin.

I have gotten better, however. I felt especially brave – and as curious as that young Turkish kid – while exploring Cuba, and snapped dozens upon dozens of pics of Cuban locals going about their business. Fishing, singing, selling, relaxing. The camera gods smiled upon me those three incredible weeks. Here are some of my favorite shots, along with any relevant commentary: 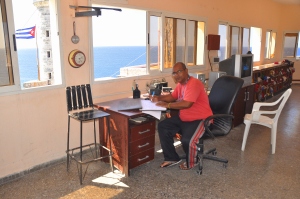 Castillo de los Tres Santos Reyes Magos del Morro (Castle of the Three Kings), in Havana, is crowned by a working maritime checkpoint. Héctor, the operator in the photo above showed me how to use the SOS beacon, how to identify vessels by flag, and how to log a passing ship. He even gave me a turn at the mic.

The larger Fortaleza de San Carlos de la Cabaña (Fort of San Carlos) is directly south of Castillo del Morro, and in the hours immediately before the fortress’s nightly cañonazo ceremony, during which a canon is fired into the Bay of Havana, vendors set up shop along the lane leading to the drawbridge. Soledad, the cheery, photogenic vendor in the picture above, sold me a baseball keychain – which I later lost – for just 1 CUC ($1 USD).

East of Havana Centro, Callejon de Hamel is a pedestrian alleyway adorned with Santería-themed murals and art. Eduardo, above, gave me a quick tour of the area in return for a Cubanito, a rum drink that also includes Worcestershire sauce.

The malecón, running for eight kilometers along Havana’s border with the Gulf of Mexico, is a place where lovers gather. I asked the girl in the picture above if she had an email address so I could send her the pic, but she claimed to have no idea what I was talking about. 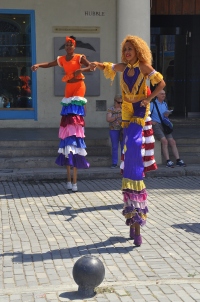 If you spend any significant amount of time in Habana Vieja (Old Havana), you’ll almost certainly run into these colorful dancers. The drum music they dance to has its origins in Santería. I had fun watching them perform, but I no sooner raised my camera than I was hounded by “staff” asking for a donation to support the dancers. Ni modo.

I should have asked this elderly vendor in Trinidad to lower the snake’s head so that I could see the rest of his face, but he was all smiles as I inquired into the cost of purchasing said snake. The answer: $25. With Cuba’s fixed economy, bargaining is not always an option in Cuba.

For its small size (less than 60,000 residents), Trinidad, five hours southeast of Havana, has an incredible live music scene. This quintet, doing their best homage to “Buena Vista Social Club,” is just one of dozens of groups to ply the town’s cobblestone streets.

Santiago de Cuba, another nine or ten hours east from Trinidad, has musical roots even deeper than those of Trinidad. The troubadours above played for tips at a seafood restaurant on tiny Cayo Granma, a island near Santiago. The guitar player, Gustavo, lost his home in Hurricane Sandy. I believe he and his partner were singing “Guantanamera” when this picture was taken.

Santiago has been home to more revolutionary and wartime history than perhaps any other city in Cuba, and its outskirts are home to several imposing military bases. But the soldiers above, enjoying a bit of “R&R” in Plaza de Marte, were so friendly that they seemingly wouldn’t harm a fly. 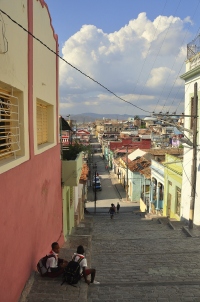 Santiago schoolchildren resting in the shady Padre Pico Steps on their way home from school.

Pargo (snapper), bought frozen in the morning and served to a non-discerning gringo that same evening. The would-be chef cleaning the fish was the uncle of my Santiago casa particular‘s owner. One helluva good cook.

Further west, Camagüey is the only city I visited that wasn’t on or close to the sea. But Hostal Lavastida, the casa particular that I stayed at, was heads and tails above the other “bed and breakfasts” that I experienced in Cuba. Can you see the resemblance between Elisa and Yaraina, its mother-and-daughter proprietors?

Mercado Agropecuario Hatibonico, a large farmer’s market along the murky Hatibonico River, is one of Camagüey’s more colorful sights. “Mike” (Miguel?), seller of onions and garlic, was quick with a smile.

Tomatoes, grown on the premises and proudly displayed by Enrique, were so cheap that I could have bought every tomato on the scale for just pocket change.

Do you think the guy in blue really works for NASA?

A high-stakes game of sidewalk dominoes, the thing to do in Camagüey.

What are your favorite images from the pictures above? And do you have any tips for photographing people?