Nashville has been in the news a lot lately.  The Nashville Predators, an NHL expansion team that debuted in 1998, are fighting for the Stanley Cup. They won their last two games, and the the city’s nightlife-rich streets have been filled with even greater than the usual number of revelers. Additionally, the 2017 Country Music Awards air this Sunday on CBS, and the CMA Awards are the city’s perennial Big Event. If that isn’t enough, it was just last month that Governor Bill Haslam announced, from Nashville, that legislation recently passed naming Tennessee the first state to promise free community college tuition.

Nashville is one of the fastest-growing cities in the south, and last year it surpassed Memphis, three hours to the east, in population. Downtown Nashville, its Cumberland Riverfront in particular, has much to offer. 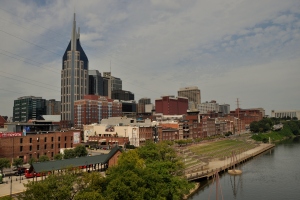 The picture above was taken from the John Seigenthaler Pedestrian Bridge. The prominent building on the left, the tallest in Tennessee, houses the regional offices for AT&T, but is affectionately referred to as the “Batman” building. 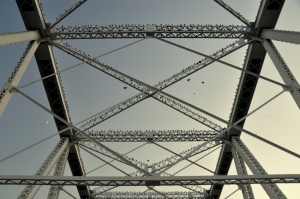 The bridge, erected in 1909, spans over 3,000 feet and was turned into a pedestrian promenade in 1998 after it was determined that the bridge could no longer handle the city’s increasing traffic. It was added to the National Register of Historic Places later that same year. The city’s pigeons rejoiced.

Three separate photos, later stitched together, comprise the above image. The bridge, from which the pictures were taken, is a popular spot for sunset strolls and bike rides.

The Korean Veterans Bridge, pictured above, is a stone’s throw from downtown as well. Note the gantries on the left. The Cumberland River Greenway, a stop-and-start series of riverside walkways, passes by those gantries and offers launching points for kayakers such as those in the picture. Access to this particular stretch of walkway is via an elevator on the east side of the Seigenthaler Bridge.

Sculpture at Riverfront Park, part of the Cumberland River Greenway. 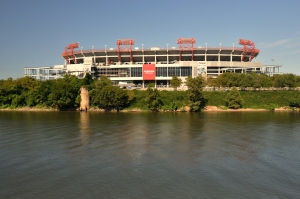 Nissan Stadium, due north of the Seigenthaler Bridge and directly across the river from downtown Nashville. The last-place Tennessee Titans (previously the Houston Oilers) play here.

Four blocks east of Nissan Stadium, along Broadway Avenue, lies the Bridgestone Arena, home of the aforementioned Predators. I have never attended a game here but can tell by merely watching one on TV that the acoustics are impressive and the crowd’s energy is infectious. Go Preds!

Broadway, home to more honky-tonks than any country music star can possibly sing about, is where you’ll find Nashville’s barely-legal crowd – Vanderbilt University coeds, mostly – the majority of them decked out in cowboy boots and hats. 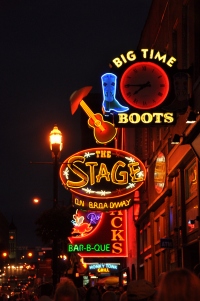 The neon lights of Broadway gives the city its nickname, “Nash Vegas.”

A few blocks away is the Country Music Hall of Fame, which was built to resemble a piano keyboard.  Admission is – wait for it – $24.95. Yikes!

The Music City Walk of Fame fronts the Country Music Hall of Fame. Respectfully, the Walk of Fame gives shouts to non-country legends as well. Jimi Hendrix has a marker here, as do Cece Winans, Les Paul, and even Jack White.

Two blocks from here and visible from the Seigenthaler Bridge, the Johnny Cash Museum is a popular stop for the city’s hop-on, hop-off tourist trolley. Admission is a bit steep at $15, but AAA discounts are available, and as a fan of the Man in Black, I found it worth the splurge. 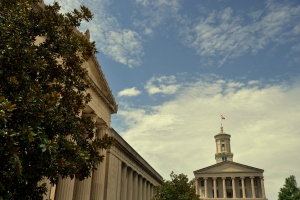 Nashville is about much more than just music. It is the state capital of the 17th-most-populous state in the U.S. The state house, above (pictured to the right of the War Memorial Auditorium), is appropriately perched atop the highest point in downtown, and is visible from almost anywhere.

Tours of the state house are free. Be sure to return after dark to see the building under the floodlights. 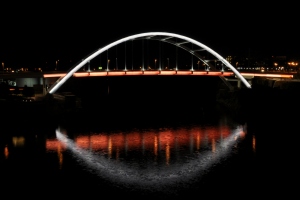 Downtown Nashville is safe. You can walk from the state house to the Seigenthaler and Korean Veterans Bridges after dark without worry…

…and I highly recommend doing so.