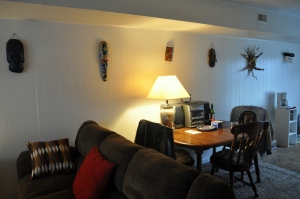 Are you a collector?

I ask because I recently moved, and when slowly unpacking four decades worth of boxes (I’m getting old), I discovered what was probably just a handful, but seemed like dozens, of travel souvenirs, tchotchkes, and other knick-knacks picked up during the course of my travels. Some, like a foot-long Maori carving made of wood, are rather nice. A couple, such as a Statue of Liberty paperweight that was given to me by my grandmother and is my only material memory of her, are nostalgic.

And then there’s the crap. A bag of shredded currency from the Denver Federal Reserve Bank that supposedly represents $165. A framed piece of barbed wire fencing from the DMZ between North and South Korea. A collection of drink coasters in the shape of a durian, that famously stinky, spiky fruit of Southeast Asia. An “official” piece of gift shop chalk from England’s White Cliffs of Dover. A plate, with mounting standing, featuring images of San Francisco and purchased during my first visit to the “Paris of the West.” And let’s not even talk about my shot glass collection. 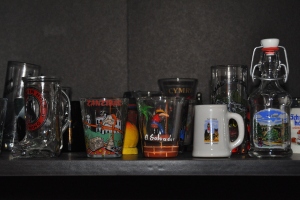 I could keep going.

Suffice to say, I couldn’t find room in my new place for all of these collectibles – at least not without the place looking cluttered. The shredded currency and gift shop chalk are on my desk, alongside the Lady Liberty paperweight, but the other items remain packed away in storage. All of this begs the question: Why did I buy this stuff in the first place?

All self-deprecating jokes notwithstanding, I try not be an “ugly American” when I travel. Ever since the re-election of George W. Bush in 2004, I have found myself joking with locals on my travels abroad that I “didn’t vote for him,” or I “want to you that most Americans really are good people,” or something along those lines. I was especially mindful of my verbiage choices when visiting the Middle East, for example a pre-Arab Spring Syria in 2007.

It should go without saying that most locals understood, and emphatically stated that it is what it is and that they hoped I would tell friends back home the real truth about the friendliness of locals and the sensory wonders to behold in places like Syria, Turkey, Malaysia, Uganda, Peru, Guatemala, and my beloved Mexico of course. No matter where you go, people are generally decent; linguistic and religious differences seldom make much of a difference. 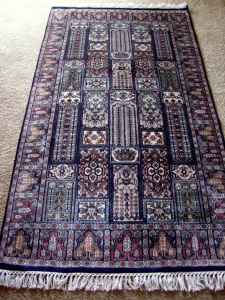 Still, I support entrepreneurship, and I try to support “mom-and-pop” stores whenever possible. Overseas, it sends the right gesture, I think, and contributes money, however small the amount, to the local economy. Why not, therefore, purchase something when traveling to bring back as a souvenir for oneself or as a gift for someone else? I have just one sibling and no children of my own, so with the exception of toys for my niece (who is now 14 and wants little to do with me, ha!), most items purchased ended up in one of various keepsake boxes that I own. And what began as a modest goal to buy one shot glass for each new country that I visited ultimately amounted to several thousand dollars spent on trinkets big and small.

Okay, so the matching Beijing Olympics t-shirts that I bought my parents when I went to China for the first time didn’t break the bank, but the $700 terracotta warrior certainly did…and even moreso after I added on another $150 in international shipping charges. That, for me, was a once-in-a-lifetime “gotta have it” purchase, and the warrior, who I’ve named Chin, proudly stands silent guard near my dining room table… 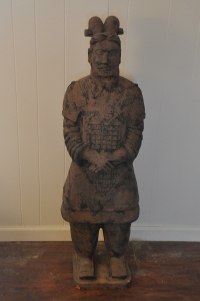 …Except it wasn’t a once-in-a-lifetime purchase. I found myself, when traveling to new corners of the globe for the first time, buying not just the requisite shot glasses and t-shirts but also larger, more expensive items. A didgeridoo from Australia, a samurai sword from Japan, a jembo drum from Kenya. A woven carpet from Agra, India, a hookah pipe from Göreme, Turkey, a guitar from Tlaquepaque, Mexico. A series of masks from various ports of call that line my entire living room, dining room, and kitchen wall. Somebody call for an intervention! 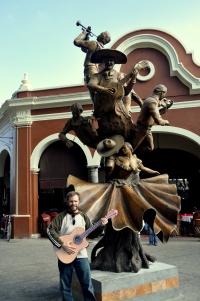 There is hope, though. For one thing, I rarely buy souvenir t-shirts. For another, I’ve made it to most regions of the world that I have ever hoped to visit, so while I probably won’t be able to stop myself from buying another shot glass the next time I visit a new country, I don’t expect any souvenir purchases that will find me shelling out hundreds of dollars at time. For another thing still, I simply can’t afford to travel like I once did, so the problem basically fixes itself.

I still don’t know what do with that plate of San Francisco, or with that piece of DMZ barbed wire, or with a pair of snout-to-snout wooden pigs, bought from a vendor at the Summer Palace in Beijing to celebrate the Year of the Pig (2007). And yes, I did buy a fedora in Havana last year (though I said “no” to the ubiquitous Che Guevara t-shirts), so I’m not fully cured. Mostly, though, I am proud of my travel souvenirs, a real “potpourri” of memorabilia. See what I did there? 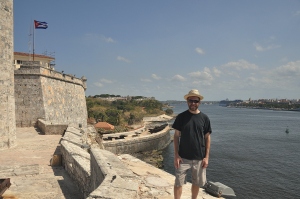 What do you collect when you travel? Leave a comment below and let your fellow Loyal Readers know!

3 thoughts on “The Indian in the Cupboard: Travel Souvenirs and Various Miscellanea”