Are you a desert rat? I don’t ask that question to be rude; it’s a sort of compliment, actually. Desert rats – the two-legged, humanoid variety, anyway – are my kind of people. These are people who prefer sunshine over rain, and dry heat over humidity.

If you consider yourself a desert rat, you might find yourself at home in the western United States, where places like Monument Valley, Joshua Tree National Park, White Sands National Monument, and the Antelope Valley California Poppy Reserve punctuate the parched landscape, making the desert more than just a vast expanse of sand.

For six or seven glorious weeks each spring, a weather-dependent carpet of orange poppies bloom in the high desert hills on the western periphery of California’s Mojave Desert. Some 1,800 acres, sandwiched between the San Gabriel and Tehachapi Mountains, are marked as protected state land just 15 miles west of Highway 14 near Lancaster, CA. 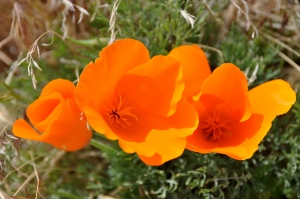 Close up of the poppies, which are fickle and bloom only during low winds and moderate temperatures. Bloom season is typically early March-late April, but you can find regular updates online.

Don’t be surprised to see poppies growing in the middle (!) of the seven miles of trails that wind through the park.

Also, watch out for rattlesnakes! The Antelope Valley California Poppy Reserve, or AVCPR for short, is home to the unique Mojave green rattlesnake. 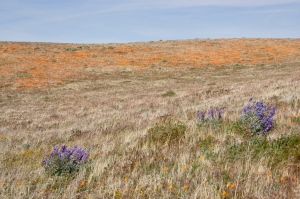 Yeah, lotsa rattlers hide out in here, keeping the rodent population in check. 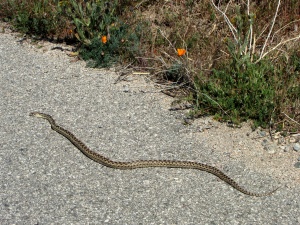 I walked right past this fella, a gopher snake that I named “Fluffy,” as I strolled down the entrance road to take a picture of the main east-west highway, Lancaster Road. 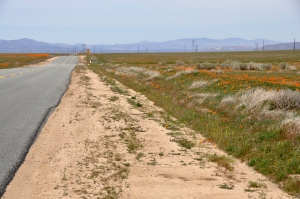 Lancaster Road, with the San Gabriel Mountains in the distance.

The wind picked up as I hiked towards this bluff, and the poppies closed up almost instantly. Check out the UFO-like cloud formation.

The AVCPR has more than just poppies; these purple flowers, known as bell heathers, were a common sighting.

This cluster of purple flowers, perhaps one inch across in total, is/are collectively known as bluedicks.

A little-visited gem of the California State Park system, and just seven miles west of AVCPR along Lancaster Road, is Arthur B. Ripley Desert Woodland State Park. You won’t find any poppies here but you will find Joshua trees in abundance.

Although I am definitely enjoying the lush greenery of East Tennessee, I definitely miss California. With captures such as the above sunset, can you blame me? 🙂

All pictures were taken with a Canon Powershot or Nikon DSLR camera. All images are the property of GringoPotpourri unless credited otherwise, and should be used with permission only.