In the four (so far) years that I’ve lived in Tennessee, and over countless holiday visits prior to my having established permanent residency here, I’ve managed to explore quite a bit of the Volunteer State, from the Delta blues history of Memphis in the west to the trails of the Great Smoky Mountains in the east. One corner of the state that I have, for the most part, overlooked – and for no real reason – is the “Tri-Cities” corner of Bristol, Kingsport, and Johnson City.

I am actively working on changing that. 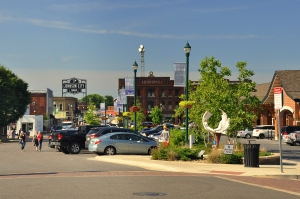 The Tri-Cities are three vibrant, mid-sized cities tucked into the extreme northeast corner of the state, where it butts up against Virginia and North Carolina. One of these cities, Bristol, actually spans the state line, with the north side of its main drag in Virginia and the south side in Tennessee. That insufferable Geico gecko appears on local TV spots strolling down State Street babbling on about “Virgini-see” and “Tenne-ginia.” Another, Kingsport, sits in the shadow of the Blue Ridge Mountains, and is said to have rebounded nicely following the near-closure of its Eastman Chemical plant in 2012, which still supplies the city with a surplus of jobs as well as, I’m told, the fetid stench of factory waste. I haven’t been there myself and can’t comment in any further detail.

It was actually one year ago, in June, 2017, that I visited nearby Johnson City for the first time. I ran an errand for my father, who at the time was recovering from knee surgery, and it took me to the massive VA hospital in Mountain Home, a city-within-a-city, located not far off Johnson City’s main drag, State of Franklin Road. I made a wrong turn on my way out and found myself passing through downtown Johnson City. Its red brick architecture, considered “Federalist” in design and an architectural descendant of Europe’s “Beaux-Arts” school, immediately caught my eye, and I made a mental note to return as soon as possible. 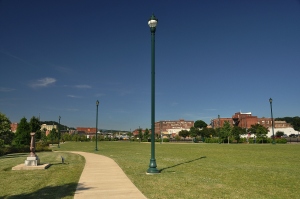 I made it back a few weeks later, on a Friday as it happened, and am so happy that I did.

Johnson City was founded in 1856 as a one-horse town, that “horse” being its train station, which connected three major north-south and east-west railroads. As the country entered a new century and the black mark known as Prohibition, Johnson City thrived. It is rumored that Al Capone used Johnson City as a major distribution center, no doubt because of the cheap production of moonshine and other corn whiskeys. Today, a bar called “Capone’s” thrives on one of the downtown streets, and the general ambience of the surrounding area, including some vibrant murals, makes it easy for one to believe that the legends about Capone are true. 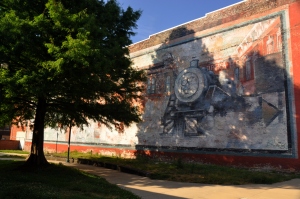 Mountain Dew was invented in Johnson City in 1940, while post-war Johnson City saw expansion in the field of medicine, with the Mountain Home hospital just one of several in the area, and in the field of education as well. ETSU, East Tennessee State University, is one of the best public universities in the southeast, and its sizeable campus is perched just a stone’s throw from downtown…

…meaning that the city has a noteworthy bar scene as well. It is my opinion that Johnson City is second only to Nashville for its nightlife. In addition to the aforementioned Capone’s, there is Freiberg’s, a German restaurant with a terrific beer menu, and Yee-Haw, a microbrewery housed in the original East Tennessee & Western North Carolina Depot, to name just a few dining and watering holes. 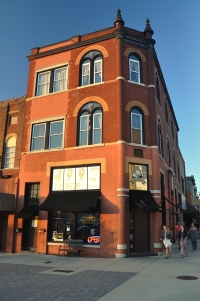 It gets better. Every Friday during the summer months, Founders Park, behind Yee-Haw Brewing Co., hosts free, open-air concerts, with beer available for purchase. My first leisure visit to the city happened to be on a Friday, and I lingered for awhile as crowds filled the landscaped amphitheater that comprises one end of Founders Park. The opposite side of the park criss-crosses Brush Creek and features a dog run as well as several pieces of imaginative sculpture art. I made a second visit to Johnson City just a few weeks ago, once again on a Friday, and made sure to stop by Founders Park. Okay, so the park isn’t anywhere near the same level of I-can’t-believe-I’m-here enjoyment as, say, the Champ de Mars park beneath the Eiffel Tower, but it’s still a wonderful place to spend a Friday evening. 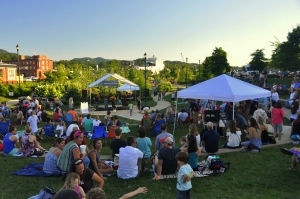 There is much to do for families, nature lovers and history buffs, too. Roan Mountain State Park, to the southeast, boasts hiking trails and what is said to be a spectacular display of rhododendrons each June (not sure why I haven’t made it there yet). Closer to downtown is the Tipton-Haynes State Historic Site, a pre-Civil War farmstead built by one of the area’s first settlers. Check out the cave on the site’s periphery – a fun diversion! Youngsters and science geeks may enjoy the Gray Fossil Site, in nearby Gray, Tennessee. This dig site features dinosaur fossils dating back almost five million years. 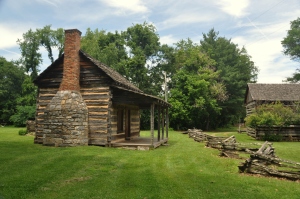 To be sure, Johnson City isn’t perfect. Shops and restaurants close early once you travel away from downtown. Every so many years, Brush Creek, which flows into the Nolichucky River, overflows its banks and floods the downtown. (Fun fact: Founders Park was originally built as a floodwater retention area.) Finally, with residents commuting between here, either of the other Tri-Cities, and as far away as Asheville, North Carolina, traffic is generally terrible.

Still, Johnson City is safer, cheaper, and cleaner than other big cities in Tennessee. Its pre-Prohibition architecture is wonderfully photogenic, and its dining and nightlife scene is better than many places twice its size. And if not for my dad’s knee surgery, I never would have discovered it.

Next stop on my Tennessee day trip bucket list: Bristol! 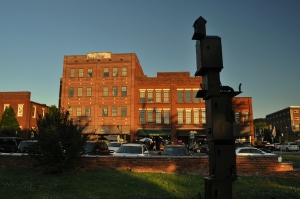 2 thoughts on “A Friday in Johnson City”