In many ways, Scandinavia is the best region of Europe in which to travel. It is safe, clean, and progressive. The fish is fresh, the summer days are long, and the green space is plentiful. Finally, the level of spoken English is often better than even, it sometimes seems, what you’ll find in the United States…making travel here a breeze.

Last month’s photo entry about Suomenlinna, near Finland, was only the first blog post about the wonders of the region; a tremendous narrative oversight by yours truly. For August, let us cross the border to the east into Sweden, my favorite country in the region. The coastal town of Kalmar, which ranked number one on my list of the top ten small cities and towns in Europe, is home to one of Scandinavia’s greatest wonders, Kalmar Castle. 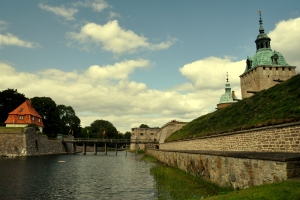 Kalmar Slott (Castle) dates back 800 years and sits on Baltic Sea land that was once fought over between Sweden and Denmark. 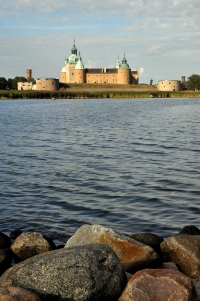 It was a beautiful August day when I visited the castle, and I was sure to stroll further along the shoreline to photograph the castle from afar. 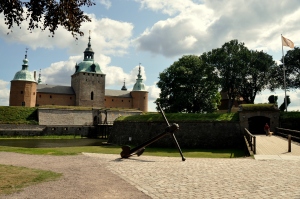 The approach to the castle crosses an exterior moat, entering through the tunnel above and to the right… 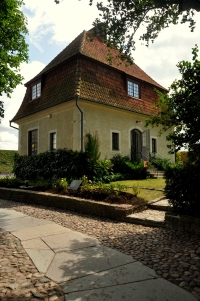 …passing the guardhouse, known here as the Castellan’s Mansion…

…then crossing a longer bridge… 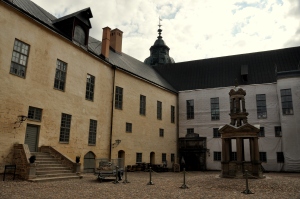 …finally entering the central courtyard, above.

The castle’s interior today houses a variety of exhibits, such as a small collection of royal garments, including King Erik XIV’s coronation robe. 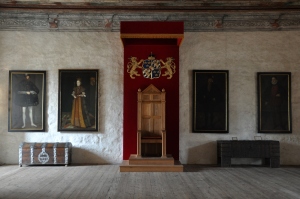 The Golden Hall, pictured above, is perhaps the grandest of the state rooms, but as you can see, the style is more “rustic chateâu” and less “Versailles chic.”

I remember that one hall featured a photo gallery about Swedish tennis star Björn Borg, while the same corridor one floor below housed what, during the years following the 1658 Treaty of Roskilde, was a women’s prison, one of its damp cells recreated for the photo above. Quite a stark contrast!

The seaward side of the castle is partially protected by a bluff that is dotted with cannons. I scampered up here to take in the view in all directions. The skinny red structure in the distance is Kalmar’s 120-year-old water tower, which, improbable though it may sound, has since been turned into an apartment complex.

As seen from the bluff, the fortified lighthouse islet of Grimskars Redoubt is an odd landmark and a nesting ground for gulls. You might think that the landmass across Kalmar Strait is Finland, but it is actually Öland, a peninsular Swedish island province that is connected to the mainland by bridge. Öland itself has several worthwhile diversions, including two more castles. 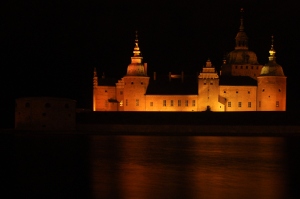 I am rather pleased with the quality nighttime picture of Kalmar Castle, taken in Manual mode and using a tripod. I do wish, though, that the round granary tower on the left was floodlit like the rest of the castle.