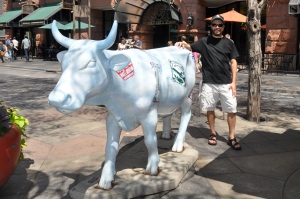 Roughly half of my blog posts these past few months have been top ten lists. Alas, here is one more.

I woke up this morning* at the not-so-ripe age of 41, and to a plethora of Facebook greetings from friends near and far. Social media has its ups and downs, but I must confess: it always makes me smile to receive birthday greetings via Instant Message, Tweet, or Wall Tag.

*Written one week ago but not published until 5/21 because of computer problems. Meh.

FB birthday greetings notwithstanding, this hasn’t been much of a birthday. Efforts by coworkers to invite me over for a night of card playing and beer drinking failed, through no fault of their own. And I have been feeling under the weather ever since I awoke this morning to the fetid aroma of dog farts. “What is wrong with me?” I thought, and then the answer dawned on me: I am 41 years old. Holy crap.

Where does the time go? It seems like only yesterday that I moved from Chicago to Los Angeles, driving cross-country with my friend Chuck and stopping off in Denver, Las Vegas, and the Grand Canyon en route. But that life-changing relocation happened in 2000! Likewise, I can hardly believe it’s been six years since I climbed Mount Kilimanjaro, Africa’s highest peak and the tallest free-standing mountain in the world. For that matter, I can barely fathom that it’s already been two years since I moved to Tennessee from Mexico City with my tail between my legs.

I never really “got it” whenever I’d meet someone who entered a depression upon turning 30 and still being childless or single. But my first day of my 41st trip around the sun has been something of an eye-opener. I am tired, and I have seldom felt less certain about my place in the world than I do at this moment. If this is just, as the saying goes, the first year of the rest of my life, then I should relish it. But can someone pass the back pills first? 😉

Here, with a hearty dose of humor packed between the dollops of honesty, are the top ten life lessons for my younger self:

END_OF_DOCUMENT_TOKEN_TO_BE_REPLACED

Happy New Year, Loyal Reader! A new calendar year begins and I am excited to make 2015 a good year. As it happens, I am also coming up on six months as a Tennessee resident. Where does the time go?!

I thought you’d appreciate an update about my life in the Volunteer State. The last time I really wrote about Tennessee was four months ago; you can read that optimistic blog post here.

Because I’ve had several months to take in my surroundings, for this entry I’m going to comment in bullet form about some things I’ve noticed that are unique to the south or unique to the state of Tennessee in particular. Several of these points are generalizations, and much of this is written with tongue firmly in cheek, so I hope I don’t offend. 🙂

END_OF_DOCUMENT_TOKEN_TO_BE_REPLACED

It is the day before Thanksgiving as I write this. 2014 has been a tough year. It started out great – bonding with the family dog during an extended winter break, returning last January to my job in Mexico City with eager new students, and enjoying a day trip with a good friend to the former spa town of Tequisquiapan. But I was living in Mexico on borrowed time, and just as I had finally expanded my local friend circle to a satisfying degree, the time came for me to return.

I have spent much of the time since then in a sort of daze. Although I’ve enjoyed scoping out my new surroundings in Eastern Tennessee, I can’t help but feel that I’m not living up to my full potential…whatever that may be. That being said, I know that 2015 will be a better year, and I’m going to do my best to find direction and stability in my life and to take on a more positive general attitude…as of this moment. For starters, I look forward to spending Thanksgiving with my parents for the first time since 1999. I can taste the cranberries already!

END_OF_DOCUMENT_TOKEN_TO_BE_REPLACED

Last December, I flew to the U.S. for an extended Christmas break and spent three weeks with my parents at their eastern Tennessee home. The weeks flew by. Flash forward eight months and one permanent relocation later, and I’ve completed another two months of Tennessee living. Somewhat to my surprise, I like it here.

I live in the foothills of the Smoky Mountains, 40 minutes east of Knoxville and roughly mid-way, as the crow flies, between Great Smoky Mountains National Park and Cumberland Gap National Historical Park. I am in a regional town that is small enough to be safe and quiet but big enough to serve as a feeder town for the dozens of small farm villages in the area. We have a shopping mall, a cinema, a junior college, the requisite Cracker Barrel, and – yes – a Walmart.

Okay so I’m not wild about the fact that there’s a Wally World in my town. It doesn’t really matter. My point is that as long as I’m here I can enjoy everything that a slower pace of life has to offer, while still being able to get out to enjoy myself, whether it’s to the movies or to the hiking trails.

END_OF_DOCUMENT_TOKEN_TO_BE_REPLACED

I have been living in Gringolandia for a month now, and the Mexico City chapter of my life is over. This reality only fully set in a few days ago, and I’m filled with mixed emotions. Alas, it is what it is.

My return to the U.S. began in Los Angeles, where I spent a few days running errands – monetary and such – and catching up with friends I hadn’t seen in almost two years. I even made it to the beach! From LA, I cleaned out my storage space, loaded everything onto a U-Haul, and drove cross-country to my new home in eastern Tennessee.

The journey went without incident, but it had some logistical challenges and cost more than I expected. As such, I thought you’d appreciate a brief write-up, Loyal Reader. Hopefully it’ll provide some insight should you ever have to make a similar move yourself.