Have you ever been fired from a job? I have, and it’s humiliating. It really is like it happens in the movies – you have to pack all your workplace personal effects – eight years’ worth, in my case (including a plaque for “Most Valuable Player,” oh sweet irony) – into a cardboard box and make the long walk to your car. My boss was kind enough to fire me after hours, but there were still several people working late, and I know what they were thinking as I slowly shuffled past them, looking at the ground and trying to bite my tongue. Gives new meaning to the phrase “Walk of Shame.”

I kid you not, though – as soon as I pulled out of the parking garage, it was as if a weight had lifted. I could breathe clearly again! I was free! My more level-headed friends would almost certainly go home and immediately file for Unemployment Compensation and polish up their resumes. Me, I did those things as well, to be certain, but they weren’t my first order of business. No, my first task was to buy an airline ticket. Going somewhere. Anywhere. Get me – the fuck – out of here.

My extensive European travels to that point (December 2008) had somehow excluded Rome. The capital and largest city in Italy, Rome is one of the oldest cities on the continent, and I knew I’d need at least five days to really sink my metaphorical teeth into what the city had to offer. I figured – and rightly so, as it turned out – that Rome would be magnificently decked out for the holidays – Rome (or Vatican City, at least) is the epicenter for all things Catholic, and if Catholics like one thing at Christmas it is a nice Nativity scene at the very least.

I was a good son and indeed visited my parents for Christmas. However, I left for Rome on the 28th, wanting to celebrate New Year’s Eve in the “Eternal City.” A full-day layover in Paris offered me the opportunity to see another great European capital in its own holiday season glory. (Aside: it was raining in Paris, and I must agree with Owen Wilson’s character from 2011’s “Midnight in Paris:” Paris is glorious in the rain!) The Right Bank was bustling with well-dressed, umbrella-toting Parisians doing post-Christmas (or was it pre-Three Kings’ Day?) shopping, and the perfect thickness of fog slowly rolled in over Invalides, where Napoleon is forever entombed. I crossed the river for a quick peek at the Museé Rodin; are Paris’s museums ever not filled with people? It was a wonderful gallery, however, and remains one of my favorite small museums in the world.

I had just enough time to catch the bus to BVA, the Parisian airport of Beauvais (“Parisian” as defined by Ryanair and only Ryanair) so ridiculously far away it might as well have been in Belgium. This airline snob recognizes that low-income travelers often pick the no-frills “budget” airlines, as those airlines are the ones with the most successful grass roots marketing as the cheapest way to fly. I don’t normally buy into that philosophy myself but admit that it was true in this instance; Air France and Alitalia were both triple the price.

A weary, midnight arrival into Rome and one train station-area hostel arrival later, I’m in Rome and ready to take on the city. My first observation upon waking the next morning: What a glorious, sunny day!  My second observation – upon stepping outside, that is: What a cold, glorious and sunny day! Having lived in SoCal for eight years with its “Mediterranean” climate and ridiculously mild winters, I didn’t expect to need a hat, scarf, and gloves in Mediterranean Rome. I packed them knowing I had a layover in Paris, and was happy to have them at my disposal here.

Yeah, Rome is alright. The city ranks with London, Berlin, New York, Beijing, and my beloved Mexico City for the sheer number of tourist attractions, parks, and museums. On two hands I count the Coliseum, Roman Forum, Vatican Museum and Basilica of St. Peter’s, Castel Sant’Angelo, Catacombs, Trevi Fountain, Spanish Steps, Monument to Victor Emmanuel II, Villa and Galleria Borghese, and the former seaport of Ostia Antica. I ended up staying an entire week and I never did make it inside the Pantheon, to Cinecitta Studios, or to the suburban palace at Villa d’Este, and nor did I get to circumnavigate the Circus Maximus of Roman chariot fame. There are three reasons for this:

1)       Most museums were closed for three of the eight days I was there. New Year’s Day, Three Kings’ Day, and Monday (in general anywhere in the world, most museums are closed on Mondays.)

2)      I spent an entire day – a great day – visiting relatives I had never met before. No regrets. Aunt Daniela and Uncle Bruno are great people, and I hope I didn’t offend Aunt Daniela by not liking her lasagna. Nothing personal, auntie; that stuff’s just nasty,  regardless of who prepares it.

3)      I lost almost an entire day towards the end of my trip in a drunken stupor. One of my hostel roommates wanted to spent his last night in Rome by taking in the nightlife, and I was only too willing to oblige. This was one of those nights – we’ve all had them – in which I have no memory of arriving back at the hostel. I remember closing down two establishments in Trastevere and then taking the party streetside. I remember ordering a steak and a bottle of wine at something like 2:30 in the morning, and that’s it. I woke up the next morning in no condition to sightsee, and alas, I was so hungover I forgot to get the contact info of my departing roommate.

Rome – as intoxicating as it can be – is a strange city as well, in ways both bad and good. For starters, it’s built around six hills, which makes navigation a bit of a challenge and which makes a full day’s exploration by foot an exhausting endeavor. The metro hits many of the key areas, including the Vatican, Coliseum, and Termini Train Station, but there are just two lines, which means that many areas are not covered. (Supposedly, construction of the metro took years and went way over budget because every so many meters the builders would uncover some ancient ruins, and construction would halt while city planners figured out what to do. And indeed, one of the highlights of exploring Rome by foot is the relative frequency at which you’ll find yourself running into seemingly-random ruins in the middle of what you thought was a regular street or alleyway.) A third metro line, long under construction, has to my knowledge still not opened (August 2011 was the original date of completion).

Most of Rome’s lodging and tourist-targeted dining is located around the train station – a safe but rather dull area. The city’s nicest hostel, The Beehive, takes reservations weeks in advance, so last-minute travelers such as myself are delegated to any one of several under-heated, overpriced flophouses. My hostel included free breakfast every morning and complimentary pasta and wine most nights – which was a great way to meet fellow travelers – but it was still cold and damp. I don’t remember its name but on my recent trip to Rome – in which I opted for a hotel, seeing as I was feeling under the weather – I walked past the site of that 2008-09 hostel and, alas, it was no more. Nearly every restaurant in that area serves uninspired pizza or overcooked pasta. It is sad when Rome – capital of a country known for one of the best cuisines in the world – has such dismal dining that an area’s best bet is McDonald’s at the train station. (Note: Things seemed to have improved slightly on my 2012 visit – but only slightly). Of course, neighborhoods like Trastevere have entire streets lined with amazing restaurants…but can you afford to dine there is the question.

I won’t say this of everyone in Italy – and nor is it true of every citizen of Rome – but in general, Romans aren’t the friendliest group of people. With apologies to Aunt Daniela and Uncle Bruno, and to my (non-Roman) Italian friends as well, most Romans just seem self-absorbed, even rude. Service in bars and restaurants is generally lousy, even with tipping becoming more common. The hostel staff – locals instead of backpackers, a bit unusual – was receptive but generally cold. A bus driver refused to point out my stop to me and even drove past it, despite my having pushed the red button. Perhaps he was having a bad day, but still – this has never happened to me anywhere else, ever. Perhaps most damning of all, a (different) hostel roommate went missing for over 24 hours until he returned to the room, head bandaged and bleeding heavily from a mugging on the subway platform the night before. He had no idea who mugged him, and the Carabinieri made no arrests. Passport, money, camera, backpack, winter coat…all gone.

All is certainly not bad, Loyal Reader. I still love Rome, my Roman relatives, and Rome’s colossal millennia of history. Because I spent most of my 2012 Rome visit in bed with a stomach virus, I didn’t get to catch up on much of what I had missed the first time, but I saw a substantial amount of Rome and its sights on my 2008-09 holiday trip. This reminds me of the original subject of this blog. Rome is an incredible place to ring in the New Year. By day, Nativity scenes adorn each of the city’s approximately 900 churches. St. Peter’s Square boasts one of the world’s largest Christmas trees. By night, couples and children ice skate near the Tiber River and Castel Sant’Angelo. Everyone drinks espresso like it’s going out of style. Every museum, café, bar, and restaurant is packed. So much energy.

Ground zero for Rome’s NYE festivities is Piazza del Popolo, a oval-shaped public “square” in which thousands gather first, to set off their own fireworks – sparklers and bottle rockets, mostly – and second, to watch the city’s own fireworks display from Pincio Hill, behind the piazza. I shared champagne and idle chit-chat with complete strangers (Americans from Atlanta, IIRC). Post-fireworks, I strolled with thousands – or it could have been millions – of merrymakers down Rome’s most prestigious street, Via del Corso. The sky was clear, the air was crisp, and Rome’s monuments, as seen by moonlight, never looked better.

Thinking back, I recall this famous Italian saying: Rome, a lifetime is not enough. I couldn’t agree more. 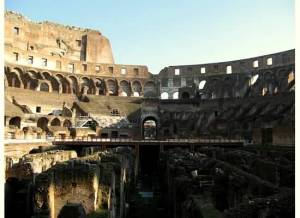 The Coliseum, a sight which does not disappoint. 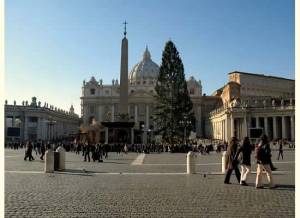