It has been three months since my first post about Mexico City’s “barrios bravos” (“tough” or “brave” neighborhoods). In that entry, I listed the “rules” that one should follow for a safe visit, and then blogged about my experiences in Tepito, the most notorious barrio bravo in the Mexican capital. During my time as an honorary Chilango, I also had the opportunity to explore – and fall in love with – another much-maligned neighborhood, this one a proper delegación (borough): Iztapalapa.

Iztapalapa is more than just a collection of barrios bravos – it is the most-populous borough in Mexico City. It is also the poorest, hence its reputation. My first visit to Iztapalapa occurred when I was assigned English classes in the district. I learned that my students worked for a laboratory in the industrial Canal de San Juan/Periférico Oriente section of Iztapalapa. I was nervous – doubly so, since my arrival would be at the pre-dawn time of 7 a.m. But Google Earth showed me the way, and, after three bus transfers, I arrived without incident. This section of Iztapalapa is on the east side of the city, directly across the road from the Federal Police headquarters. The area is a manufacturing hub for numerous firms, so it’s low on charm but high on security. I felt safe, and by my third week I was walking back from class and stopping off for tacos campechanos at the city’s best street taquería.

I was hungry to explore Iztapalapa’s cultural offerings. When I learned of the existence of the Cabeza de Juárez in the Guletao section of the delegation, I pinched myself to be sure that such a bizarre monument actually existed, and in such a bizarre place. The Cabeza de Juárez is exactly what it sounds like: a giant bust of Mexico’s beloved indigenous president, Benito Juárez. The head is adorned with David Alfaro Siqueiros art. The bizarre part is that a) you can climb inside the head for more art, and b) it’s situated in the middle of a large glorieta (traffic circle) in an otherwise unremarkable neighborhood. A pedestrian bridge leading to the site offers views of nearby Peñon Viejo, a scalene hill with slums climbing up three sides. Who chose such a location for such a monument? 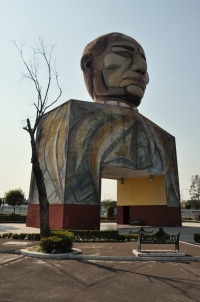 Last April, my Aussie friend/fellow expat/blogger Peter invited me to join him and his girlfriend in Iztapalapa Centro for the barrio’s Good Friday Passion Play, an annual recreation of the trial and crucifixion of Christ. The event is pretty impressive and attracts millions. Believe it or not, that was my first visit to the heart of Iztapalapa. The crowds brought safety in numbers – though I did keep an eye out for pickpockets and bag-slashers. The day went off without incident, and is one of my best memories from 2014 (so far). Read more about it here.

I have since made three more visits to Iztapalapa Centro. It seems that there is always some kind of festival going on. On one Saturday, the main square was mobbed with families enjoying Día del Niño (Children’s Day), while a feeder street was lined with life-size alebrijes (Oaxacan-style wood or papier mâché sculptures of fantastical creatures and comic book heroes). On another day, the square played host to a book fair while a nearby church celebrated one of countless Mexican Catholic feast days. How could such a charming neighborhood be the administrative heart of one of the city’s most notorious barrios bravos?! It didn’t seem possible then, and it doesn’t seem possible now. 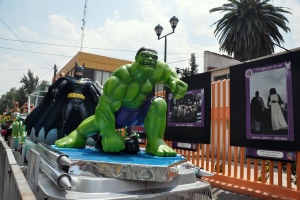 One metro station beyond Iztapalapa Centro is where hearty tourists alight for Cerro de la Estrella. “Star Hill” is the highest point in the borough, and commonly thought to be the crucifixion reenactment site for Iztapalapa’s Passion Play. (The correct location for the crucifixion is actually Parque El Molino, a gently-rising hill to Cerro de la Estrella’s proper mountain. Even I got that wrong in my aforementioned write-up about the event.) I learned that an Aztec pyramid crowned Cerro de la Estrella, and, being a fan of ancient ruins, decided to check out the site for myself. Not far past Parque El Molino, the access road climbed past a small – and slightly suspect – pueblito – a village or barrio bravo itself. Chickens squawked “Green go home,” in perfect Spanglish, but I was undeterred. I even stopped for lunch at a home whose residents were selling taquitos in their driveway. 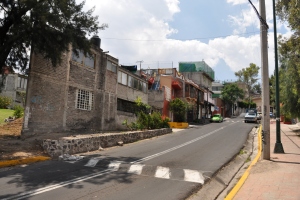 The road leveled out past the barrio bravo and I passed the strangely-located New Fire Museum. A gate barred any further access had I been traveling by car, and a cop asked where I was going. “To the peak,” I answered, to which he replied – after some hesitation – “Okay, but be careful.” Startled but undeterred, I continued ahead. I entered a forested slope as the grade steepened considerably. The road zig-zagged and I breathed in the smell of pine. Finally a set of concrete stairs on my left led me to the summit of Cerro de la Estrella, and to the flat-topped pyramid that the Aztecs built there so many centuries ago. 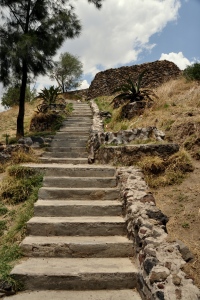 With the area’s reputation and the cop below, I somewhat expected to find myself the only person here. Alas, there were a dozen others resting, eating lunch, or snapping photos of the admittedly panoramic view from 2,460 meters (8,070 feet). From one angle I could see the long skyline of Reforma and El Centro. From another, I could see the enormous warehouse buildings of Central de Abastos wholesale grocery market. To the right of there, I saw the slum hill of Peñon Viejo, a long way off. (Iztapalapa, it turns out, is huge – and much more than just a barrio bravo.) Due south of Cerro de la Estrella but a long way off, the canals of Xochimilco were visible. East of Xochimilco rose 3,930-meter (12,894-foot) Picacho Ajusco – Mexico City’s highest point! 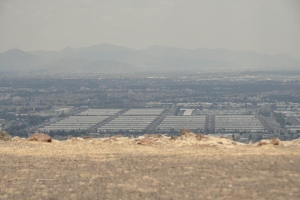 Cerro de la Estrella was a major ceremonial site for the Aztec people. It was a self-sufficient community, completely separated from Tenochtitlan by Lago de Texcoco. Every 52 days, the New Fire Ceremony was performed here. This ceremony involved ritual sacrifice to ensure that the sun would continue to rise. Have you seen the movie “Apocalypto?” Wrong tribe, right ritual (albeit on a smaller scale). I remember reading that numerous caves dot the summit area, and that many of them were once used by the Aztecs. I climbed down the western flank of the pyramid towards where someone had constructed an enormous white cross. A cave – not particularly deep but big enough for several people to stand in – faced the cross. 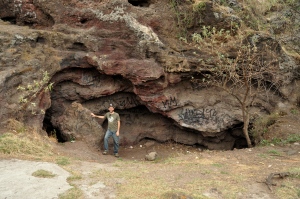 Impressed but by no means satiated, I descended to the access road, determined to explore several hiking trails that led into the woods. They were not signed but the summit was surrounded by city on all sides, so I knew I couldn’t get too lost. I found several caves – each one larger than the one before – and I even stumbled upon rock petroglyphs that likely dated back 1,000 years! Cerro de la Estrella is a national park, and several “rangers” (just cops basically – no Smokey the Bear caps here) were hanging out near the petroglyphs. It was late in the day, and I figured this was my cue to leave. On the way back to the metro, I visited the New Fire Museum, then stopped off at Parque El Molino, where I watched local families fly kites while the three crosses featured in the Good Friday crucifixion reenactment stood forgotten in the background. 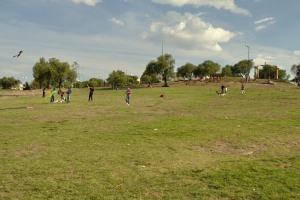 The last barrio bravo that I explored in Iztalapapa delegación is located below the opposite slopes of Cerro de la Estrella. Culhuacán was the site of another major pre-Colombian civilization, a canal city and possible rival of those living and worshipping at nearby Cerro de la Estrella. It is somewhat unique in that it is a barrio bravo and (as of 2011) a barrio mágico at the same time. The later designation is due in large part to the fact that Culhuacán plays home to the Monastery of St. John the Evangelist. This peaceful place – built from stones originally used to construct the no-longer-in-existence Culhuacán Aztec temple – is a beautiful, but crumbling, monastery-turned church, with lovely cloisters and astonishing 16th century frescoes, including one of St. Augustine. 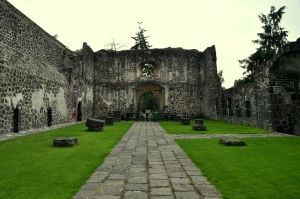 Adjacent to the monastery is the idyllic Parque Histórico. This small park fronts busy Avenida Tlahuac but boasts a small reservoir with egrets and a fountain. Like the monastery, the park is a place of peace, and the reservoir dates back to colonial times. I met a 15-year-old local posing for photos in her quinceañera dress, and her family let me snap a few pics. A real beauty. A block from here stood La Capilla del Señor del Calvario (The Chapel of the Lord of Calvary), a minor pilgrimage church built over a cave in which a buried statue of Christ was discovered 200 years ago. The streets around here didn’t feel completely safe, but they were lively enough during the day, and several of them led uphill towards Cerro de la Estrella itself. I can only presume that “Star Hill’s” trail system descends all the way to Pueblo Culhuacán itself. 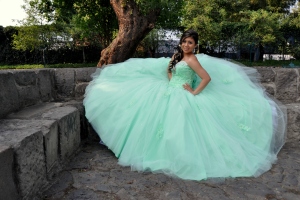 Ah, Iztapalapa. What a contradictory place. I have heard that the hillside slums around Peñon Viejo are no-go areas, and I’ve read numerous reports about rampant theft and prostitution in Central de Abastos. (The stolen items, incidentally, are rumored to end up at Tepito, their black sheep cousin.) Still, while I wouldn’t proclaim the areas around Canal de San Juan/Periférico Oriente, Guletao, Iztapalapa Centro, Cerro de la Estrella, or Culhuacán to be crime-free, they do feel safer than Tepito, Doctores, and other notorious barrios bravos. Most of all, they are living, breathing neighborhoods spread across one of sixteen diverse delegaciónes in what is perhaps the most vibrant city in the world.

Do not judge a book by its cover.