I spent part of last Saturday afternoon walking around downtown Knoxville. It was a perfect summer day, with non-threatening clouds and a gentle breeze. As I headed from Gay Street towards Market Square, one block away, I passed an alley that travels between the two…and did a double take.

Graffiti, alive with color, adorned both sides of this urban alley, and a dozen or so tourists were snapping pictures. When in Rome, the saying goes…and so I did.

I later learned that what I call “Graffiti Alley” is actually called “Armstrong Alley.”

The color really pops on this pic, methinks.

I used to find graffiti to be something of an eyesore, but have evolved my thinking on the matter. Knoxville is just one of several cities with impressionable graffiti on display.

Big cities in Mediterranean Europe seem especially “at risk” of graffiti. Lisbon, the enchanting Portuguese capital and port city, has some imaginative street art…and, alas, more than a few penis tags (not pictured). 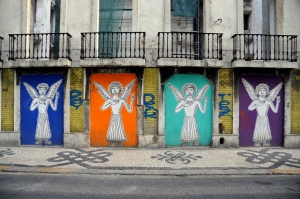 This angelic scene was tagged, boldly enough, in the center of town. 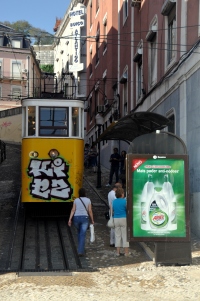 Even the city’s century-old trams, which ply the hills of Alfama, are not immune to a tagger’s touch. 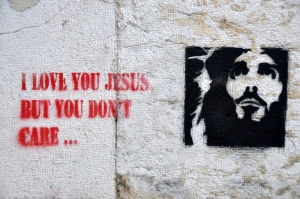 Regardless of your views on religion, these tags, which appear to been spray painted over stencils, are among the neatest graffiti art I’ve seen.

I didn’t see a lot of graffiti during my 2011 visit to Rio, as the city was in the middle of an urban rejuvenation in preparation for the World Cup and the Olympics, but there were still some interesting tags. Had I journeyed into the city’s notorious favelas, I likely would have seen more.

This imaginative tag, above, was signed by the artist and marked the underside of a highway overpass in the Botafogo neighborhood. 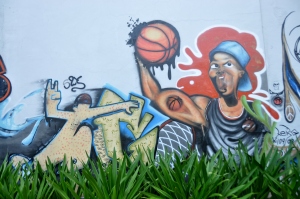 Landscaped plants front this graffiti-tagged concrete wall in a park that Cariocas pass through en route to Ipanema Beach.

One of the fastest growing cities in the America, Bogotá, Colombia is a vibrant city of seven million, seated in the northern Andes at an elevation of roughly 8,700 feet above sea level. Most of the graffiti I noticed was in the gentrified “Old Town” district of La Candelaria. 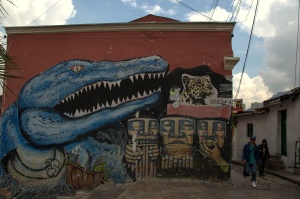 Plazuela el Chorro de Quevedo, a local gathering spot for post-workday libations, is one of my favorite spots in La Candelaria. I love this wall art for its sense of child-like whimsy.

This street scene (photo taken in the outskirts of La Candelaria), with its indecipherable tags beneath a wall of mosaic tiles, sums up modern Bogotá perfectly: rough around the edges, surrounded by mountains, filled with a sense of post-drug war security and a ray of hope for its young population – provided they get an education.

Much of Bogotá’s political graffiti is angry. Where are the 20,000 missing Bogateños that have disappeared over the last 30 years? Drugs, kidnappings, random murders, infanticide, political hits…what a violent past for a city with such a promising future.

“Repressing us tells us that we are free.”

The difficult-to-pronounce capital of Slovenia, one of Europe’s best – and least-visited – countries, is wrought with competitive cartoon tags by Vixen and Pony, two rival artists. 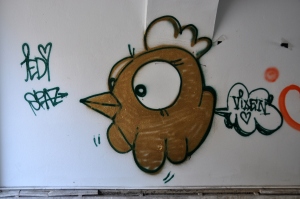 This image reminds me of Pokey, of Gumby-and-Pokey fame. 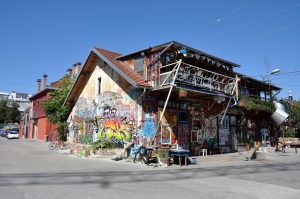 The building above can be found in Metalkova, an alternative district just east of the main train station. Here, taggers are free to decorate at will. The red building with chimneys in the background is a prison-turned-hostel.

The tagger above looks a bit like Eminem. Is he cleaning out his closet?

Berlin, one of the biggest and most exciting cities in Europe, has tons of graffiti…nearly all of which is sprayed on either side of what remains of the Berlin Wall.

Berlin’s East Side Gallery, in fact, is a mile-long stretch of political street art.

No Man’s Land, the pockmarked, heavily-mined yardage between East and West Berlin.

Against the wall and spread ’em, gringo.

Even the lamppost is tagged.

That is the Spree River on the other side of a gate that looks eerily like the “Arbeit macht Frei” entrance gate of nearby Sachsenhausen Concentration Camp. 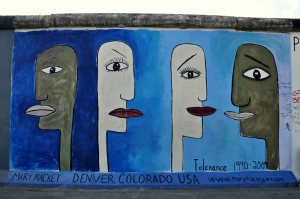 I couldn’t end this post without including a few images from my beloved Mexico City. Graffiti is often cracked down upon in many developing countries, but the Mexican capital has one of the best cumulative collections of art on the planet…and I’ll include urban art as part of that formidable collection. 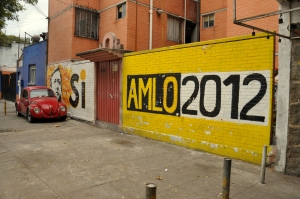 Politics is a recurring theme in Mexican street art, carried over from the murals of Diego Rivera and José Clemente Orozco. The above tag, adorning the exterior wall of a private residence along Eje Central, endorses two-time presidential candidate Andrés Manuel “AMLO” López Obrador.

This vibrant tag was just a few blocks down Eje Central from the AMLO tag.

Speaking of political graffiti, this somewhat juvenile tag, at Parque México in Colonia Condesa, is proudly displayed by its artists. Hard to believe that it took two people to come up with something so mind boggling.

Some of Mexico City’s most troubled neighborhoods – their barrios bravos – are home to undiscovered artists of real talent. Tepito, the most notorious barrio of all, is home to the Galería de Arte José María Velasco, which features art about and by residents of Greater Tepito. Whoever is responsible for the detailed design above is a genuine talent.

What do you think of graffiti? Eyesore or art form?

7 thoughts on “Urban Graffiti around the World”