It amazes me sometimes how quickly time flies. Five years have passed since I visited this month’s photo locale – a mountain retreat for kings and queens of old, and one of Mediterranean Europe’s most undiscovered gems.

Sintra, Portugal, which sits in the mountains roughly 30 minutes inland from Lisbon, was the longtime resort getaway for Portuguese royalty. A series of castles and palaces, some whimsical, some stately, some medieval, dot the hilly landscape. They are a shutterbug’s delight, and a simple day trip (which is all that many tour bus travelers get) is nowhere near enough time to take in all that Sintra has to offer.

The Setais Hotel, Sintra’s best lodging, features a backyard courtyard that offers this view of Sintra’s star attraction, fanciful Pena Palace. Note also the leaves, which were just starting to turn during my visit in mid-September.

Setais Hotel itself. Beats the pants off of any hostel.

The first point of interest that I visited was the one that I knew the least about prior to my trip. My Lisbon concierge recommended that I check out the Quinta da Regaleira, pictured above.

As palaces go, the Quinta is rather small. Its gardens, however, sprawl over a steep hillside, and make for a fun half-day of exploring. They feature turreted towers… 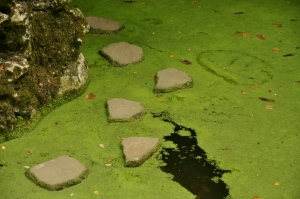 …and this subterranean well, like something out of a Guillermo del Toro movie.

A pleasant uphill hike from the Quinta leads to the candy-colored Pena Palace. A visit here can occupy an entire day, but I found the late afternoon light especially conducive to photography.

The design motif for Pena Palace is half-Moorish, half-Disneyland castle.  🙂 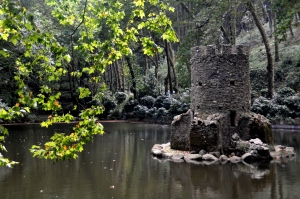 The sprawling gardens below the palace feature statuary, bridges, and man-made islands such as that seen in the picture above. Incidentally, there was no photo editing needed for the striking color contrast. 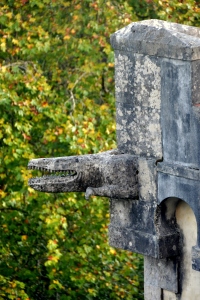 …and views overlooking Sintra town and surrounding countryside. The fortifications on the left belong to a Moorish fortress, which I did not have time to visit.

El Palácio Nacional de Sintra, the National Palace of Sintra, was first constructed during the Muslim occupation of the Iberian Peninsula, but was later occupied by Portuguese royalty, who incorporated Manueline design elements to their renovation of an otherwise-Moorish building.

The courtyard in front of the palace is a popular gathering place, and often hosts special events.

My self-guided tour of the State Apartments led me through the bedchambers of King Sebastian.

The gardens in the rear of the National Palace were rather small, but featured a display of late summer flowers.

I spent two days in Sintra and could easily have spent a third. Go!