Ann M. Skinner, 70, passed away Monday, September 19, 2016. Ann was born and raised in Chicago, IL, graduating from Maryville Academy and attended the Moser Secretary College. She raised her family in Plainfield, IL where she was very active with her children’s schools and the community. She and her family moved to Memphis in 2004. Ann spent most of her career in the secretarial field, however, the last 15 years she spent as a telephone operator with Target Stores which she retired from in 2011. After retiring she then relocated to Morristown with her husband.

She was preceded in death by her parents, Stanley and Alice Poterala.

A Celebration of Life Service will be held at 2 p.m., Saturday, Sept. 24 at Mayes Mortuary with the Rev. Gordon Smith officiating.

In lieu of flowers the family asks for memorials to be made to the Leukemia and Lymphoma Society, 1311 Mamaroneck Ave., White Plains, NY 10605 or www.LLS.org.

My mother’s funeral was yesterday. The facts are summarized in the obituary clipping above that featured in Wednesday’s Citizen-Tribune; the paragraphs below are from my eulogy to her:

I will always remember what a wonderful cook my mom was. She didn’t go all out very often, but when she did, it was a meal to remember. Whether it was her beef stew, her pork chops, her goulash, her meatloaf, or her incredible mashed potatoes, throughout the entire house you could smell the food slowly cooking, and whoever would be sitting at the table for dinner knew that they were in for a feast.

Even better than mom’s mashed potatoes, though, were her deviled eggs. She used mayo, mustard, Worcestershire sauce, lemon juice, and paprika, so they had the perfect savory-sweet taste. I asked her to make a platter of deviled eggs for a work function once, and they went over so well with everyone that by the time I made it to the serving table to help myself, there weren’t any left!

Something about those eggs, though. They would make me fart like it was nobody’s business. And I mean that, of course, as a compliment. Speaking of farts, my mom refused to use the dishwasher, and preferred washing dishes by hand. Inevitably, at some point after each meal, we’d be sitting in the living room while she was cleaning up in the kitchen. All of the sudden, this trombone blast would sound from the other room, like a “Charlie Brown” teacher, and one of us would giggle and yell out, “Doing the dishes!” My mom, gotta love her, would get in on the laughter, too.

Her willingness to laugh was one of the things about her that I will remember most fondly. She wasn’t a perfect person, but she had a good sense of humor. She enjoyed the comedies of Steve Martin and John Candy, and, later, of Kristen Wiig and Tina Fey. However, she was also very naive. One night, not long before she got sick, we rented the Tina Fey movie “Whiskey Tango Foxtrot,” and I had to explain to her at the end of the movie, when it had become clear that there were no references to the military alphabet in the film except for its title, what “WTF” really meant.

It wasn’t until I moved to Tennessee in 2014 when I learned something else about my mother: she was quite the card sharp. She played cards almost daily, and whether it was classic games such as Rummy or newer games like Phase 10, she won almost every time. I remember joking with her more than once that had we discovered her knack for cards earlier, we could have sent her to Las Vegas years ago and never had the kind of financial problems that often plagued us. In response, she would always smile and say, “Wanna play again?”

My mom had always been in good health, and she seldom went to the doctor – not until it was too little, too late, as it turned out. Was it karma that reared its ugly head? Did she simply push her luck by waiting too long to go? Some people might say “yes,” but I would disagree. She beat leukemia, you see. The disease was in remission during the last three weeks of her life. It was pneumonia that got her…and kidney failure…and fluid around her heart and lungs.

Depeche Mode had a song from 1984 called “Blasphemous Rumours,” in which one line from the chorus goes, “And I think that God has a sick sense of humour.” I couldn’t agree more. With apologies to Pastor Smith, who is a good man, it isn’t often that I see God’s love. God is cruel. As I mentioned earlier, my mom was not perfect. She had her flaws, same as everyone else. But still…she didn’t deserve this. She didn’t deserve to spend the last two months of her life in a hospital bed.

I have never understood why the God that my mom believed in does what He does. Maybe I never will. If I can take any comfort from mom’s passing, it’s that she isn’t suffering anymore. The last time I saw her, she was awake and alert, though clearly in pain. I will always be grateful that I was able to tell her that I loved her, and that she could hear me say it.

Mom, I hope you can hear me still as I say it one more time: I love you. 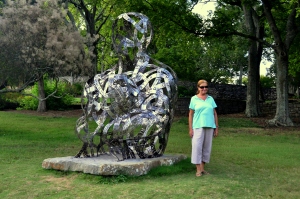 16 thoughts on “Remembering My Mother”