Russia has been in the news a lot lately, and for all of the wrong reasons. From allegations of influence in the outcome of the 2016 U.S. presidential election to questionable political alliances (read: the supposed selling of arms to Syria and North Korea) to nauseous partisan bickering over which U.S. leader has a better grasp on U.S.-Russia relations, all media attention on Europe’s largest country portrays it as a political dinosaur still fighting the Cold War.

While the country’s visa hassles only serve to reinforce this negative image, patient travelers who actually make the long journey to Russia will find a surplus of absorbing experiences to behold. Visiting Red Square in Moscow, for five decades one of the most intimidating places in the world, is one such experience…and a photographer’s delight.

The picture above, taken from the northern end of Red Square, shows the intimidating size of the square, lined by GUM Department Store on the left (east), the Kremlin on the right (west), and St. Basil’s Cathedral on the far (south) side of the square. Red Square is the second-largest public square in the world, after Beijing’s Tiananmen Square.

GUM, the exterior of which looks better at night than during the day, takes up almost the entire eastern side of the square. 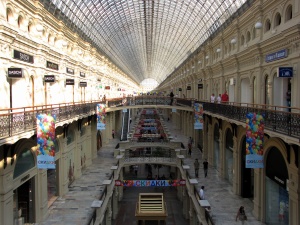 Although city maps still label it as a department store, it is actually more of a shopping mall, with boutique clothing and chocolate stores that are largely devoid of customers. One of my travel acquaintances, who currently lives in the U.S. but grew up in Moscow, said that as a child, every store sold nothing but socks.

One of the most historically-important, albeit reconstructed, buildings in Red Square is tiny Kazan Cathedral, sitting next to GUM Department Store. This Russian Orthodox church was razed as the behest of Joseph Stalin in the 1930s, and reconstructed in its original style following the fall of Communism circa 1991.

Like many other Orthodox churches, the interior of St. Basil’s is adorned from floor to ceiling with frescoes and gold-lined, inlaid wood panels such as the one pictured above. Unlike most other churches, St. Basil’s features ten small, individual chapels – one for each onion dome that gleams from the outside. Acoustics are incredible. 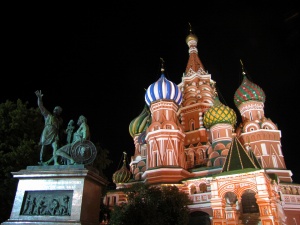 You may have heard the story about St. Basil’s architect, Postnik Yakovlev,  who was said to have been blinded by Tsar Ivan the Terrible so that he (Yakolev) could never build anything else of such beauty. This legend has been debunked in recent years, but whether true or false, few travelers would argue the following: St. Basil’s Cathedral ranks up there with the Taj Mahal and Sintra palaces as one of the most beautiful buildings in the world.

The State History Museum, on the north side of Red Square, houses an eclectic collection of treasures from throughout Russia, ranging from prehistoric bone fragments to crown jewels to horse-drawn carriages.

The Resurrection Gates, behind the State History Museum, mark the formal entry into Red Square. And look who I found napping just outside the gates?! (I thought Stalin died in 1953, but alas, I appear to have been mistaken.)  😉

Between the imposing Kremlin walls and the merchant quarter of Kitai-gorod lies Alexandrovsky Garden. The garden runs the length of the walls and include quiet walking paths…

…war memorials for such events as the Siege of Leningrad (now St. Petersburg)… 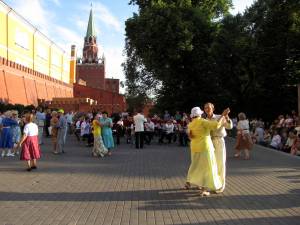 …and tree-lined plazas that host impromptu concerts and dance lessons.

Summer in Moscow is short, but glorious. It was quite humid when I visited in July, 2009, and the day this picture was taken ended in torrential rain, but the sun rose early (around 4 a.m.) and shined plenty of light on these Alexandrovsky Garden flowers before the late afternoon thunderclouds rolled in. 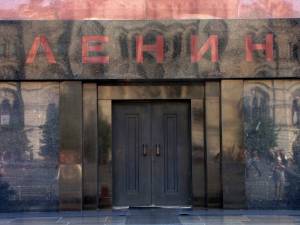 The most imposing feature of Red Square may be Lenin’s Tomb. The queue to pay respects to Lenin – or to creepily shuffle past his formaldehyde-doused corpse, on display inside the one-room mausoleum – is ridiculously long. Arrive early.

The towers, spires, and palace buildings in the picture above demonstrate the sheer size of the Kremlin (as seen from along the banks of the Moskva River, which freezes solid during the winter months).

Dmitri Medvedev was still president at the time this picture was taken. Today, Vladimir Putin rules with an iron fist from behind these red walls – when he’s not posing bare-chested on horseback, that is. 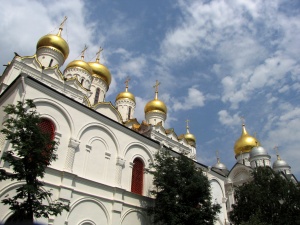 A visit to the Kremlin itself is not what you may think. Gardens line the wall that fronts the Moskva River, and several Orthodox churches occupy the grounds. It is something of a miracle that these magnificent houses of worship survived 50 years of Communism, during which time many churches were shuttered, demolished, or – as in the case of the Church of the Spilled Blood in St. Petersburg – converted into potato warehouses. 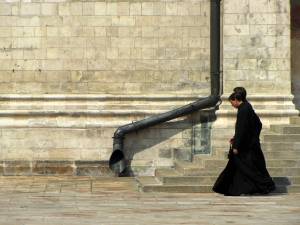 Rain gutter notwithstanding, I think that the image above is a remarkable capture. 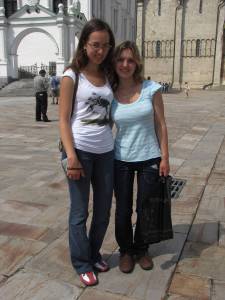 The State Kremlin Palace Concert Hall and Theatre Hall looks more imposing than other Kremlin buildings but actually houses a concert hall for Russian dignitaries. At the time of my visit, Britney Spears was the most recent high-profile guest to have performed here.

Red Square, with its museums, mausoleum, cobblestones, towers, department store, and candy-colored churches, is one of the most picturesque public gathering places in the world.