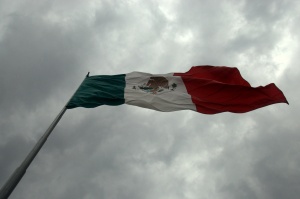 Mother Nature has been angry lately. Flooding in Nepal, Bangladesh, and East India. Hurricanes Harvey, Katia, Irma, José, and Maria. Wildfires in California, Montana, Wyoming, and the Pacific Northwest. And no fewer than three earthquakes – one as recent as this morning – to strike Mexico in just 16 days.

It is Mexico, my one-time home for almost two wonderful years, about which I am especially worried.

Earlier today, a 6.1-magnitude temblor (tremor) shook the ground in Oaxaca State, and was felt as far away as Mexico City, six hours to the northeast. This quake came just five days after a 7.1-magnitude temblor that hit Puebla State, due east of Mexico City. This morning’s quake was too far south to be an aftershock from last Tuesday’s quake, which is to suggest that Puebla, CDMX, and other regions may receive additional earthquakes as well.

If all of that isn’t enough, it was on September 7th that an all-out terremoto (strong earthquake) shook the ground at 8.1 magnitude on the Richter Scale. That first quake struck just off the Oaxacan coast, 650 miles from Mexico City and away from heavily populated areas in general. Still, over 50 people perished.

During my last few months of residency in Mexico City, I recall four earthquakes over perhaps five weeks. One of them happened when I was teaching class in an 18th-floor conference room in a modern office tower in Santa Fe. The tower was built on rollers, and by the time everyone on the floor had evacuated to the elevator bay, the quake was over, although the building continued to “roll” back and forth for several more minutes. Disconcerting but, considering that no one had perished, kind of a fun story to tell at future social events. 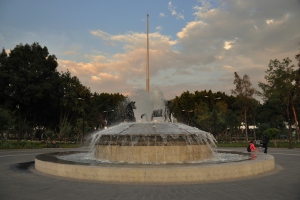 Another quake happened while I was taking a shower, and a third while I was sleeping. The custom in Mexico City’s concrete apartment buildings is for residents to flee into the street. Only one couple left the building that night; it was the weakest of the temblors to have shaken the city. The fourth, and strongest, happened while I was home, between classes. My rent included one visit per month by a cleaning lady (nothing illicit there, Loyal Reader), and she was dusting when the quake arrived. We each moved into the doorway, where I remained calm and she clutched her heart with one hand and the door frame with another. As the quake died down, she crossed herself repeatedly, practically hyperventilating “Dios mío” over and over again. She couldn’t fathom why I was so calm. Even after I explained that I used to live in Los Angeles, which also weathered its share of earthquakes, she continued to shake her head. “Eres muy valiente,” she said, crossing herself again while giving me the evil eye at the same time. “You are very brave.” I wonder what she would have said had I told her that I happened to be visiting China during that country’s 2008 Sichuan earthquake? I made it out of that one unscathed, but over 69,000 Chinese locals were not so lucky.

These recent Mexico earthquakes, however, are much more horrifying than anything I experienced while living there. Several government buildings have been riddled with cracks, many of them deemed too unstable to reenter. This YouTube video shows a building exploding, and countless others are still uninhabitable for fear of possible gas leaks. Roma, one of the oldest and trendiest neighborhoods in the city – and home to my friend Rosalina and her two children – is among the most heavily damaged. Fortunately, my friend is okay. Tragically, Colegio Enrique Rebsamen, an elementary school near Xochimilco, in southern CDMX, collapsed, killing 25 people, including 19 students.

It gets worse. The epicenter of the quake was in Puebla State, and it was in the town of Atzala, in Puebla that 11 members of single family perished when the quake toppled the parish church where they were attending a baptism. The two-month old niña being baptized was among the dead. Only her father survived.

But Puebla State and Mexico City were not the only places affected. Morelos State, south of CDMX, had what, pound-for-pound, may have been the worst damage. The municipal town of Jojutla, near Cuernavaca, was all but flattened; this story, written by my journalist friend Peter, tells the sad tale better than I ever could.

It is important to note, as Peter does in one of the last paragraphs of his article, that volunteers have come out in droves to help with the rescue. I know from talking to Chilangos that lived through the 1985 quake (which, ironically, happened 32 years to the day before Tuesday’s temblor) that after the event, you never heard stories of looting or robbery, only stories of help and determination. The barrio bravo of Tlatelolco, one of the worst-hit neighborhoods from that quake, has a statue of Plácido Domingo, who flew to Mexico City after that quake and coordinated rescue efforts in the barrio. 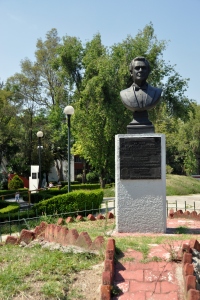 I am happy to report that all of my Mexico City friends are safe. And from all online accounts, the mood in CDMX is one of not fear, but hope. Mexico City is one of the oldest cities in the Americas, and one of the greatest. It has survived this, and worse. I am not presently in a position to travel down there, but I hope to make a trip before the holidays, and to bring with me items to donate. Clothes, toothpaste, stuffed animals, things like that. For those people who lost their homes, and certainly for those people who lost loved ones, it will be a sad Christmas.

If you want to help, the following organizations collect money and/or participate in relief efforts:

GringoPotpourri note: I don’t have any images of the quake’s destruction; the pictures you see here are from better times. Some of them describe, I think, the resilience of Mexico’s people, and their civil and national pride.

Be safe and stay strong, mis amigos Mexicanos. I hope to see you soon.

5 thoughts on “Mexico on My Mind”