2018 is coming to a close as I write this. I thought I would conclude the year – and this series – with a post that circles back to where it all began. This blog was created not long after I moved to Mexico City in 2012, a two-year experiment with numerous highs and lows, though certainly more of the former than the latter. My first photo locale feature, three years later, featured the city’s Chapultepec Castle. Twelve months after that, a follow-up post highlighted the visual wonders of the city’s Centro Histórico.

But there is much to be seen in a city this size that doesn’t fit easily into any single category. Like this blog, there is a veritable potpourri of eye candy throughout CDMX, ranging from dilapidated buildings to elegant roofcombs to market foodstuffs to haphazard graffiti to the Chilangos themselves, 22 million living, breathing human beings who give Mexico City its heart and soul. Enjoy this random Mexico City potpourri, Loyal Reader…and thanks!

END_OF_DOCUMENT_TOKEN_TO_BE_REPLACED

Mother Nature has been angry lately. Flooding in Nepal, Bangladesh, and East India. Hurricanes Harvey, Katia, Irma, José, and Maria. Wildfires in California, Montana, Wyoming, and the Pacific Northwest. And no fewer than three earthquakes – one as recent as this morning – to strike Mexico in just 16 days.

It is Mexico, my one-time home for almost two wonderful years, about which I am especially worried.

END_OF_DOCUMENT_TOKEN_TO_BE_REPLACED

You probably know that the entirety of Mexico City’s Centro Histórico is walkable, with a concrete grid of sidewalks connecting every inch of the city’s storied, teeming humanity between Lázaro Cárdenas (Eje Central) in the west, Anillo de Circunvalación in the east, Granaditas (Eje 1 Norte) in the north, and José María Izazaga in the south. If that isn’t enough, no fewer than 10 metro stations, one metrobús route, and a cable-powered trolebús (not to mention countless peseros) pass through those same storied streets, ferrying commuters hither and yon.

Wider, better-maintained sidewalks link the Centro Histórico with the city’s green lung, Bosque de Chapultepec, via Palacio de Bellas Artes and Paseo de Reforma, the city’s grandest thoroughfare. Plans are underway to build a seventh metrobús line that will supposedly run along Reforma, but since public transportation improvements move at a caracol’s pace in CDMX, I will believe it when I see it.

My casual stroll this past February along the Ferrocarril de Cuernavaca, a railway line-turned-walking and cycling path, prompted me to wax further nostalgic about the walkability of Mexico City in general…not just in the aforementioned city center area, but in outlying sections of the city as well. Traffic congestion has become such a problem that a recent CNN Money article named the city as having the second-worst traffic on the planet! To me, any chance to walk, rather than drive, is a welcome one.

END_OF_DOCUMENT_TOKEN_TO_BE_REPLACED 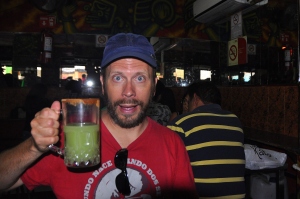 Q: What do an entrepreneur, a human resources executive, a high school English teacher, a middle school history and science teacher, and a graduate student have in common?

A: They live in Mexico City, and they are my friends.

My long-awaited (for me, at least) return to “CDMX” was a resounding success. I didn’t get to see everyone I wanted to see, nor was I able to hit up every one of my former stomping grounds, but on the whole, I was able to stroll through some of my favorite neighborhoods and spend time with old friends – even if it was just for a quick drink.

Would you like to meet them? (Apologies in advance to mis amigos for posting these pics – although I don’t think the content is anything too compromising.)

END_OF_DOCUMENT_TOKEN_TO_BE_REPLACED

The next Mexico City neighborhood that I have decided to profile lies in the south of the city, beyond the reach of the subway. It is a ritzy area of palacial homes, double-decker shopping malls, Aztec ruins, desert gardens, and some of the worst traffic in the city.

Pedregal (full name: Jardines del Pedregal – “Rocky Gardens” en inglés) is an urbanization of land that sits immediately north of Periférico Sur and west of Avenida de los Insurgentes, in the shadow of Picacho Ajusco, the city’s 3,986-meter (13,077-foot) mountain. Although I have grown to not just like but love Pedregal, its sprawling, plus-sized colonia, filled with diesel-belching buses that drive past gated private residences is not for everyone. 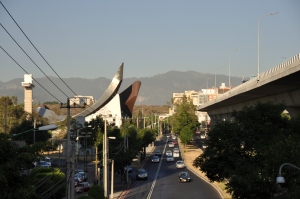 END_OF_DOCUMENT_TOKEN_TO_BE_REPLACED

This is a bolillo. 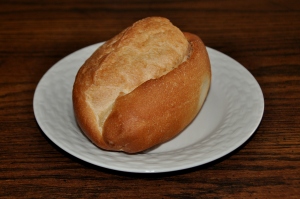 Although it looks like a piece of hard bread, it is so much more than that. I was delighted when my dad brought home a dozen of these from a local Mexican bakery, because they reminded me of guajalotas, my favorite breakfast item whilst living in Mexico City.

Also called a torta de tamal, a guajalota is a steamed tamale unwrapped and served inside this bolillo – roll – and topped with salsa verde or roja. Spicy, warm, and filling.

Nothing goes better with a guajalota than a cup of café tibia – warm, not scalding, coffee with the slightest hint of cinnamon – from Café el Jarocho. This chain of inviting coffee shops can be found in just corner of the world – the Coyoacán borough of Mexico City.

END_OF_DOCUMENT_TOKEN_TO_BE_REPLACED 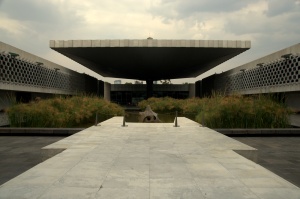 So why Mexico City? “Why not?” would be a great reply to that oft-asked question, but of course there’s a bit more to it than that.

I took my first trip to Mexico City over Thanksgiving of 2002. Ten years ago. Though not my first international trip (I had previously set foot in Europe, Canad-ia, and Brazil), nor my first trip to Mexico (that would be a drunken 1998 road trip from San Diego to Tijuana; is there any other kind?), I now know that my 2002 Mexico City trip/holiday/vacation was the trip to change the course of my life to include more travel than anyone I’ve known. This was the trip because it was my first international trip alone, to a place just four hours from my former homes of LA and Chicago by plane, yet whole worlds apart.