Although this recent winter has been one of the stranger ones in memory, spring is right around the corner. While nights and early mornings are still quite cold, dogwood trees are in bloom and the rainfall has turned the rolling hills of East Tennessee into a verdant quilt of green. Meanwhile, summer is waning in the Southern Hemisphere, where January = July and June = December.

Some below-the-equator regions, however, such as Central Chile and Northern Argentina, enjoy a mild year-round climate, and you can visit cities like Santiago and Buenos Aires well into April and still enjoy what I call shorts-and-sandals weather. It was in March, 2011, in fact, when I found myself enjoying two warm, sunny days exploring downtown Buenos Aires. 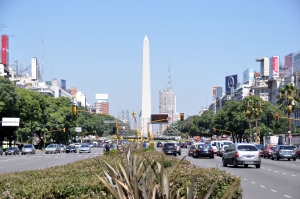 This obelisk, with eight lanes of traffic on each side of Avenida 9 de Julio (the widest street in the world, and named after Argentina’s Independence Day), is the defining symbol of Buenos Aires. 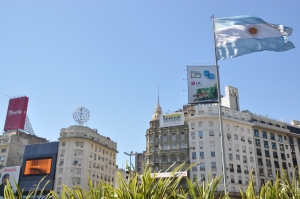 The Argentine flag flies in the glorious midday sun alongside the obelisk, while a nearby cluster of buildings and jumbotrons makes this particular intersection a sort of Latin Piccadilly Circus.

The downtown streets are crisscrossed by several pedestrian malls, alleyways closed to vehicular traffic and lined by gorgeous Baroque architecture.

At night, these corredores peatonales turn into impromptu flea markets…

…and into open-air tango shows by day. 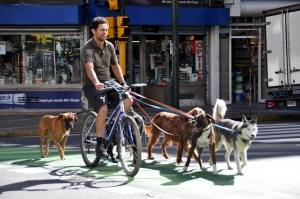 Dog walkers (and dog cyclists, in this case) are a common sight in Buenos Aires.

Casa Rosada, aka the “Pink House,” the Executive Mansion and Office of the President of Argentina. Part of la casa is open for tourism, and visitors can step onto the balcony pictured above – yep, the balcony made famous in the musical “Evita.” 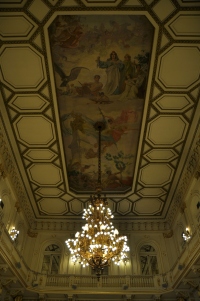 Interior of the Pink House. Check out that frescoed ceiling!

The Pink House at night, as photographed from Plaza de Mayo, a popular place for young lovers to stroll.

Another building that looks better at night than during the daytime: Teatro Colón, considered by Acoustics Today magazine to be the fifth-best concert hall in the world in terms of acoustics.

I love the facade of this tabaqueria, located on pedestrianized Calle Florida. 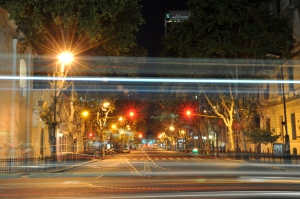 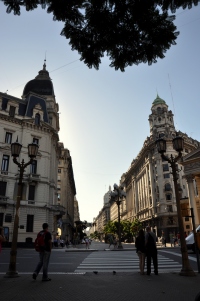 Travel further afield, by subte (subway) perhaps, and you can visit Recoleta Cemetery, where Eva Perón is entombed. A chaotic bus ride in the opposite direction will take you to the colorful, soccer-worshipping neighborhood of La Boca. But downtown BA, where the street lamps and architecture seem to have been transplanted from of Paris, London, or Barcelona, is the place for me.