There are often days when I feel like shutting down my blog because I’ve told all the stories I have to tell. On the other hand, there are days when I stumble upon a picture or piece of writing from my blog, and that discovery ignites a whole ‘nother fuse of memories worth sharing.

Earlier this week, I came across my 2014 post Passion Runs High in Iztapalapa, one of my better entries from my time in Mexico City, and a fun read about the annual Good Friday Passion Play from CDMX’s Iztapalapa delegación. Give it a read and let me know what you think, okay?

But 2014 wasn’t the only time I got to take in the alternating solemnity and joy of Semana Santa (Holy Week). 2012 saw me spending Easter in El Salvador, and witnessing a procession of penitent worshippers literally march through the streets of San Salvador, and over alfombras, which are colorful sawdust carpets featuring images of peace. Just one year earlier, I spent several pre-Easter days in Andalucía, Spain, observing similar processions from afar in Granada and Sevilla (scheduled processions in Sevilla were rained out, a bummer considering that every hostel and hotel in the city raised its rates for the anticipated crowds).

The Semana Santa memory that lingers largest is the collective series of days I spent in Antigua, Guatemala, in March, 2005. Here, in the one-time capital of Guatemala, where earthquake-toppled churches nestle in the shadow of surrounding volcanoes, the entire community comes together each Semana Santa for a daily series of processions, alfombras, and church services leading to Resurrection, aka Easter Sunday. While not a believer myself, I have always been fascinated by religious rituals. Spending a week in Antigua and experiencing them firsthand was not disappointing.

It isn’t difficult to get the lay of the land here. The small city or large town, depending how you measure things, is, like Granada, Nicaragua and San Cristóbal de las Casas, Mexico, a near-perfect grid of streets. The leafy main square, Parque Central, is ground zero for public gatherings, and a series of churches – some left in ruins following a series of earthquakes in 1773 – branch out in several directions. Other points of interest: Cementerio General San Lázaro, perfect for when you are in a melancholic mood, the stunning Mercado de Artesanías, where supply exceeds demand, and Cerro de la Cruz, a hill topped with a cross and a terrific view over the city, worth visiting ever since tourist police chased away the bandidos that used to mug unsuspecting tourists who would hike to the top. None of these places, however, can best the view of towering Volcán de Agua through the much-photographed Santa Catalina Arch. 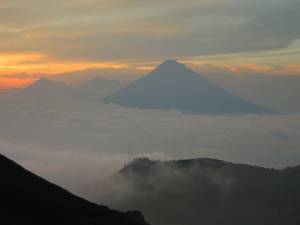 Lodging options are normally plentiful except during Semana Santa. I reserved a dorm bed at Jungle Party Hostel, a boisterous place near the center of town that is famous for, among other things, its all-night party on Maundy Thursday. Alas, I was not aware of this all-night party before I booked my reservation, but I enjoyed my stay despite the lack of sleep (more on that later). Backpacker shuttles to-and-from Guatemala City are frequent and include free police motorcycle escort. While Antigua is safe, Guatemala City isn’t.

It is important to take a peek inside as many Antigua churches as you can. For one thing, most processions originate in one of these churches, so you might be able to see one of the procession objects – a sort of parade float, carried by hand and adorned with Jesus and/or Mother Mary and/or Mary Magdalene – without other people around. If you’re lucky, you might find an elaborate food offering – maíz, onions, avocados, and other vegetables are the norm – laid out beneath the altar and as striking as any painted work of art in a museum. (The picture below was taken inside the San Francisco Church.) For another thing, these churches are beautiful, particularly at Easter, when the aisles are adorned with purple ribbons and when Mayan women sit outside the entrances and braid palm fronds. 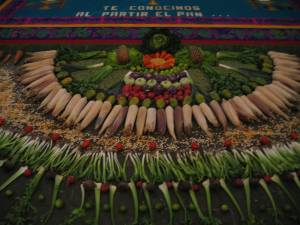 The Catedral (Cathedral), built in 1680, is one of the most important buildings in town, and the starting point for several of the week’s processions. Adding to the church’s appeal is the fact that half of the complex – the original, 1541 cathedral, to be more specific – exists in a state of ruin, left as a memorial to a series of earthquakes from the 1600’s. It is more than a bit surreal to wander around a 500-year-old brick chapel with a circular dome that is open to the sky above. Even better, though in no condition for holding services, is the Iglesia de la Recolleción (Harvest Church), a spectacular jumble of ruins with some frescoes still visible.

I attended mass at the Iglesia Escuela de Cristo (School of Christ Church), a large church in the southeast part of town. The church isn’t much to look at from the outside, but I still remember its acoustics and high ceiling. Seating was standing room only, which made it difficult to supposedly sit, stand, and kneel as requested. Though I didn’t understand the words, I still went through all of the motions with the exception of lining up for the communion wafer. I remember staying for a free concert in the small plazuela in front of the church. All in all, attending mass was an interesting experience, sort of a “when in Rome” thing that was probably more spiritual than normal, courtesy of the seasonality of the service; I wonder what “off season” church attendance is.

Seeing the sawdust (or pine needle) carpets of Antigua, and then watching as processions destroy them (and sawdust sweeper-uppers literally follow close behind) is the highlight of a visit to Antigua during Semana Santa. Here are pictures of a few such carpets: 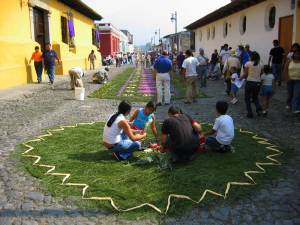 The L-shaped carpet was built with the assistance of yours truly. Can you find me in the picture immediately preceding this paragraph? I bowed out of the hostel’s all-night, Maundy Thursday party in exchange for helping the locals, and if memory serves, it took us from 10:30 p.m. to 8:30 a.m. to finish. A few other backpackers with whom I have long since lost touch joined in for the last two hours. We gringos didn’t speak much Spanish at the time and the locals spoke even less English, but we got it done. Volunteer work such as this can be extraordinarily rewarding.

Alas, the hard work of creating an alfombra is destroyed in seconds as the procession marches over it. While I don’t fully understand why the carpet is a necessary part of the recreation of Christ’s forced march to Golgotha, the alfombras are created with the sole purpose of being destroyed. Still, they are made with love, hard work, and a tremendous sense of community pride. The following picture shows a different alfombra in its early stages of creation: 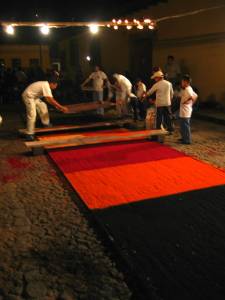 As for the processions, they range from quick affairs such as the late night arrival of Roman legions on horseback… 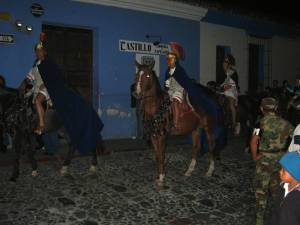 …to impressive, mournful displays, with incense burners, men in pointy hats, and locals dressed in their Sunday best.

These processions attract such a large following that, as the final image below suggests, you can hardly tell where the procession ends and the bystanding begins.

I have always wanted to return to Antigua at a different time of year. (I imagine that Christmas would be an especially lovely time to visit.) The city as a whole is a UNESCO World Heritage Site, and the hospitality of its residents is as generous as its wealth of archaeological and religious riches. Still…I doubt that any return visit out of season would even come close to capturing the magic of Semana Santa.

For those of you that celebrate, I wish you a festive Passover and a happy Easter.

2 thoughts on “Semana Santa in Guatemala”