The next Barrio Bravo that I have decided to revisit digitally is south/southwest of the Centro Histórico. Although the “tough neighborhood” in question is neither as sprawling as Iztapalapa, nor as dense as Tepito, nor as jam-packed with history as Tlatelolco, it houses several hundred thousand Chilangos and has just enough points of interest to merit a few paragraphs in this blog series.

Doctores is so named because several of its streets are named after various doctors of some renown. Dr. Olvera, for example, was an 18th-century forensic scientist. Roughly speaking, the large colonia stretches runs from Arcos de Belén in the north to Viaducto in the south, and from Avenida Cuauhtémoc in the west to Eje Central in the east. The entirety of Doctores lies within Cuauhtémoc delegación (borough), which also governs the always-bustling Centro Histórico. 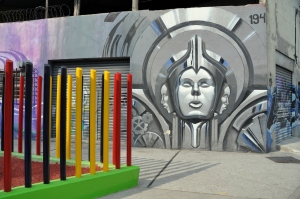