The next Barrio Bravo that I have decided to revisit digitally is south/southwest of the Centro Histórico. Although the “tough neighborhood” in question is neither as sprawling as Iztapalapa, nor as dense as Tepito, nor as jam-packed with history as Tlatelolco, it houses several hundred thousand Chilangos and has just enough points of interest to merit a few paragraphs in this blog series.

Doctores is so named because several of its streets are named after various doctors of some renown. Dr. Olvera, for example, was an 18th-century forensic scientist. Roughly speaking, the large colonia stretches runs from Arcos de Belén in the north to Viaducto in the south, and from Avenida Cuauhtémoc in the west to Eje Central in the east. The entirety of Doctores lies within Cuauhtémoc delegación (borough), which also governs the always-bustling Centro Histórico.

If you were to study an aerial map, you might notice that the streets of Doctores appear to run within a stone’s throw of such trendy neighborhoods as Roma and Narvarte. As such, the “high crime” of Doctores occasionally spills over into the outlying streets of those neighborhoods. A 2007 study by La Jornada listed Doctores as the fourth-most-dangerous neighborhood in Mexico City (based on the number of reported crimes).

Most of the barrio’s streets are completely deserted at night, lending Doctores an air of unease. As such, many of my Mexican friends refuse to venture into Doctores, except when transiting its arterial streets by car or by bus. Additionally, many of the barrio’s centuries-old pulquerías, long believed to be centers of vice and ill-repute, have been raided and shut down by the police, only adding to the bad reputation. That being said, I’ve read that most of the crime is related to car thefts – albeit at gunpoint, I’m sure.

In complete honesty, Doctores is somewhat boring. It feels like a dull, semi-residential swath of land between other, more interesting places. If you’ve spent any time in Los Angeles and have traversed the boring, endless stretch of Crescent Heights, La Cienaga, and other high-traffic, low-charm boulevards between West Hollywood and Beverly Hills, you’ll get a sense of comparison.

Its sidewalks bake on hot spring days. Traffic slows to a crawl along one-way Eje Central and seemingly doesn’t move at all along too-narrow Viaducto. The few parks that exist are occupied mostly by old men and dog walkers, although one such green space boasts a towering statue of Lázaro Cárdenas. The revolution-era general Cárdenas was later elected president, and is considered one of the country’s better leaders. The stretch of Eje Central that flanks the eastern boundary of Doctores is named after Cárdenas. 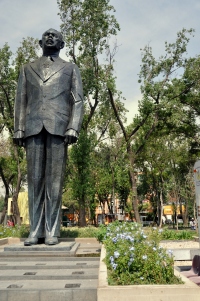 Once, not far from this park, I saw a homeless man sitting on a sunny patch of sidewalk and wearing nothing but combat boots (with gnarly toes sticking out from one ragged boot), a sleeveless camouflage jacket, and a single pantleg. In retrospect, I wish I would have stopped to buy him a torta (sandwich) in exchange for a bit of conversation. What was his life story? How did he come to be in such a place?

Doctores is not without its redeeming qualities. For one thing, numerous public transportation options make Doctores a convenient place for many people to live and work. Metro Lines 1, 3, 8, and 9 traverse this part of the city in some capacity, as does Metrobus Line 3, countless peseros (mini-buses), and the Eje Central Trolebús. It can be a long ride some days, but just four pesos will take you from the main bus station in the north of the city to its counterpart in the south. En route, you can alight at Tlatelolco, Lagunilla, Bellas Artes, Coyocán, etc. My insider tip: for a fast north-side ride, hop on a pesero running along Dr. Vertiz, which passes through the geographic center of Doctores. These peseros run every few minutes and you can usually get a seat. (Although I’m sure you’ll have a safe journey, you should still exercise more than the usual care if you are on board after 8 p.m.)

For another thing, Doctores has a few touristic points of interest. The northern end of the neighborhood is home to Arena México, the country’s most important stadium for lucha libre wrestling. I had the opportunity to attend a match one fun Friday night approximately one year ago, and it was a safe venue that attracted locals and tourists of all ages. Arena México is located on Dr. Lavista Street, within walking distance of Metro Balderas; here’s my blog entry about the event. 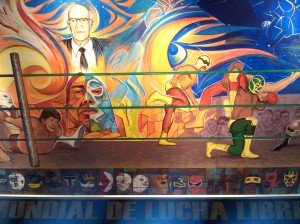 Speaking of tourism, I stumbled upon something wonderful one sunny Saturday afternoon shortly after exiting a stalled Trolebús. I figured I would reach my destination (nowhere in particular) faster on foot, and had walked less than one block when I noticed a colorful building on quiet Dr. Olvera Street. The building: Museo del Juguete Antiguo México, the coolest museum of old toys that I’ve seen anywhere. I am certain that I spent two full hours browsing its impressive galleries of forgotten kitsch collectibles. Here is the website and here are a few pics: 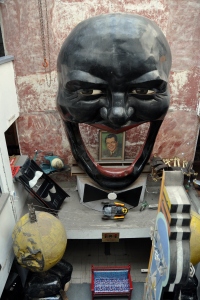 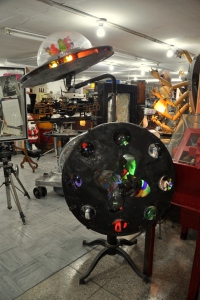 Near the southwestern edge of Doctores between Avenida Cuauhtémoc and Dr. Vertiz, Hospital General and the adjacent Centro Médico are the largest medical facilities of their kind in Mexico City. Dedicated Metro and Metrobús stops serve both places. Just south of here and running along congested Viaducto, Panteón Francés is one of the city’s oldest and most hauntingly beautiful cemeteries. Literally meaning “French Cemetery,” Panteón Francés is a walled oasis of peace. It merits a visit at any time of year but especially during Día de Muertos (Day of the Dead), during which time the descendants of deceased Chilangos pay respects to their dearly departed in a two-day ordeal that is one part funereal and two parts celebratory. Read more about Día de Muertos here.

Aside from the expected smattering of colonial-era churches, Doctores is generally not renowned for its architecture. There is one structure that merits mention, however. Salto del Agua generally refers to a Metro station along Lines 1 and 8. However, Salto del Agua is also a charming stone fountain that marks the easternmost terminus of the Chapultepec Aqueduct. The aqueduct was built by the Aztecs, although the surviving fountain in Doctores is a relatively recent reproduction, courtesy of sculptor Guillermo Ruiz). The original structure, a bit simpler in design, has deteriorated considerably and is now on display at the Museo Nacional de Virreinato (National Vice-Regal Museum) in Tepotzotlán.

Some of el DF’s most creative graffiti can be found in Doctores – particularly along Eje Central. My favorite is this Edward Scissorhands mural. Sadly, the children’s peluquería (barber shop) that it advertises appears to be shuttered.

All in all, Doctores is a far cry from being the most exciting area of Mexico City. With non-existent nightlife and high crime statistics, it is little wonder that tourism hasn’t made much of an inroads into Doctores, and it’s equally unsurprising that even many locals don’t venture there. Personally, I believe that the neighborhood’s reputation as an especially-notorious barrio bravo is something of an exaggeration. And for whatever it’s worth, Doctores is conveniently located close enough to the Centro Histórico and other, livelier parts of the city that if you spend any significant amount of time in Mexico City, your travels will almost certainly take you there eventually. My advice: keep your wits about you and have an urban adventure!